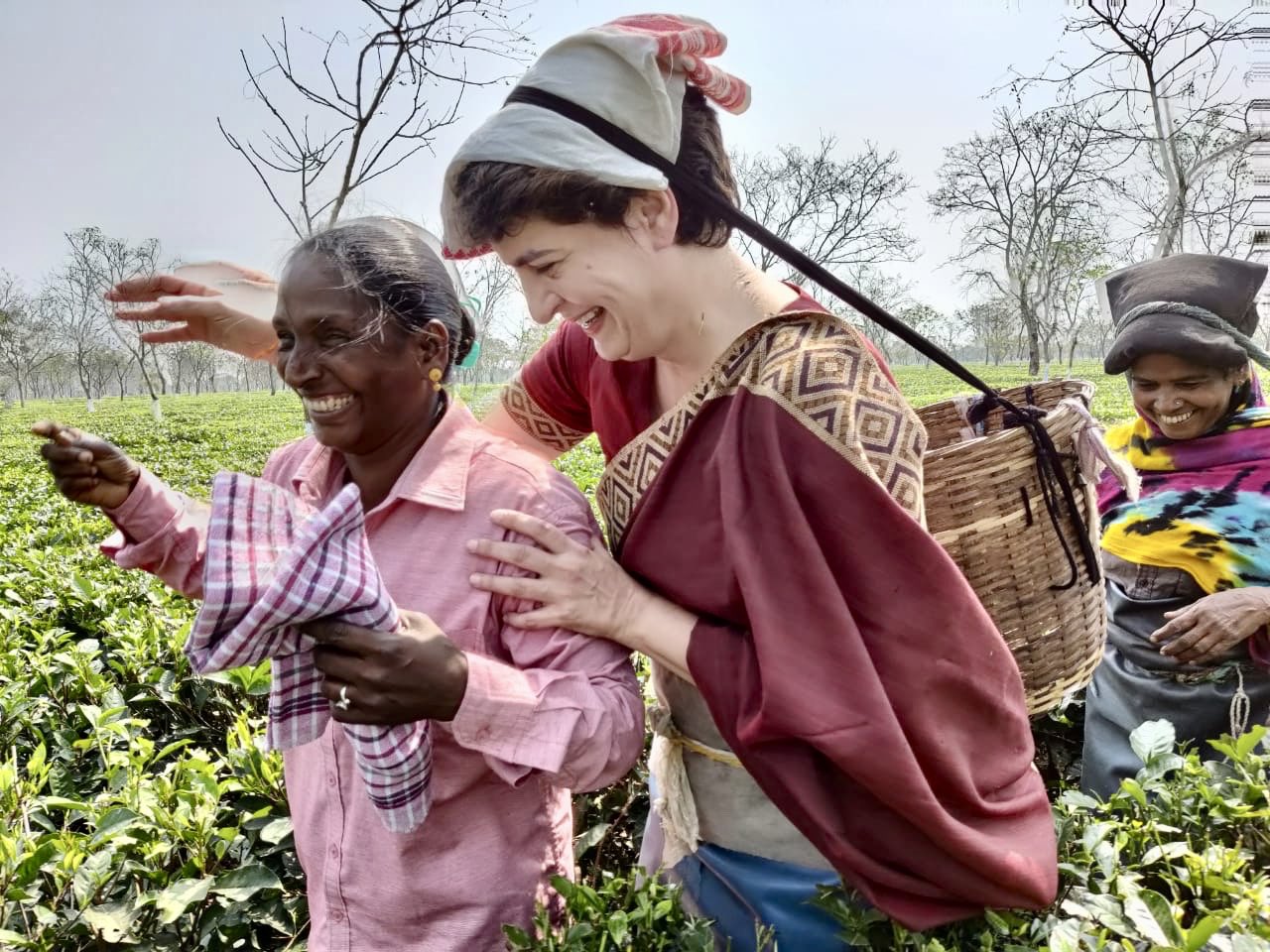 BISHWANATH: She wore the traditional ‘mekhla chador’, attempted a few steps of ‘jhumur’ and learned how to fling with ease freshly plucked tea leaves into the wicker basket fastened to her back.

Congress leader Priyanka Gandhi Vadra was all smiles and charm as she went around the Sadharu Tea Estate near here to take a slice of the tea tribe voters away from the BJP.

The community is composed of many large tribes like Munda, Santhal, Kurukh (Oraon), Gonds, Bhumij and several others who wield considerable political influence in Jharkhand.

“It is the ‘dharma’ of the parties to fulfil the promises made by them when they visit you during elections.

You have the power to vote and teach a lesson to the government which does not keep its words. We have promised Rs 365 as minimum daily wages…” the Congress leader told the women workers while trying to sweeten their cup of woes.

She also spoke about the farmers’ agitation at Delhi’s border points.

“More than three lakh farmers are sitting on a dharna for the last two months, barely four to five kilometres away from where the PM stays, but he has not gone to meet them.

“What is the problem if he goes to meet them once, talk, and if the farmers have a problem with the laws, then make changes for their benefit… but the policies of this government are for the rich and powerful and not for the common people,” the Congress leader said.

Exuding sisterly love and warmth, Priyanka, after finding it difficult to put the tea leaves and buds into the basket, was told how to do it and she began dexterously tossing them over her head and into the receptacle.

‘Chai’, the world’s favourite morning brew, has been part of the electoral discourse in Assam, with even Prime Minister Narendra Modi and former Congress president Rahul Gandhi peppering their speeches with its flavour.

On a visit to poll-bound Assam last month, Modi said an international conspiracy was being hatched to malign the country’s image with the plotters not sparing even the Indian tea.

“People who are conspiring to defame India have stooped so low that they are not sparing even Indian tea,” Modi said, in an apparent reference to the toolkit environment activist Greta Thunberg tweeted to mobilise support for the farmers’ protest.

Among other things, the first toolkit she reportedly posted on social media and deleted had a point that read “Disrupt yoga and chai image of India in general”.

Whether Priyanka’s tea garden outreach turns out to be the proverbial storm in a teacup or sweetens the brew for the Congress in its former stronghold only time will tell.