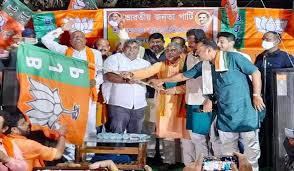 HOOGHLY: Amid an ongoing exodus from the ruling Trinamool Congress ahead of the West Bengal assembly elections, two-time party MLA from Pandabeswar in Paschim Barddhaman district and former Asansol mayor, Jitendra Tiwari, joined the BJP on Tuesday.

Tiwari, who had rebelled against the TMC leadership but had mellowed down after the BJP declined to induct him into the party in December last year, joined the saffron camp in the presence of party state chief Dilip Ghosh at a programme in Sreerampur in Hooghly district.

“I have joined the BJP as I want to work for the development of the state. In TMC, it was no longer possible to work for the party,” he said after joining the saffron party.

Elections to the 294-member state assembly will be held in eight phases between March 27 and April 29.