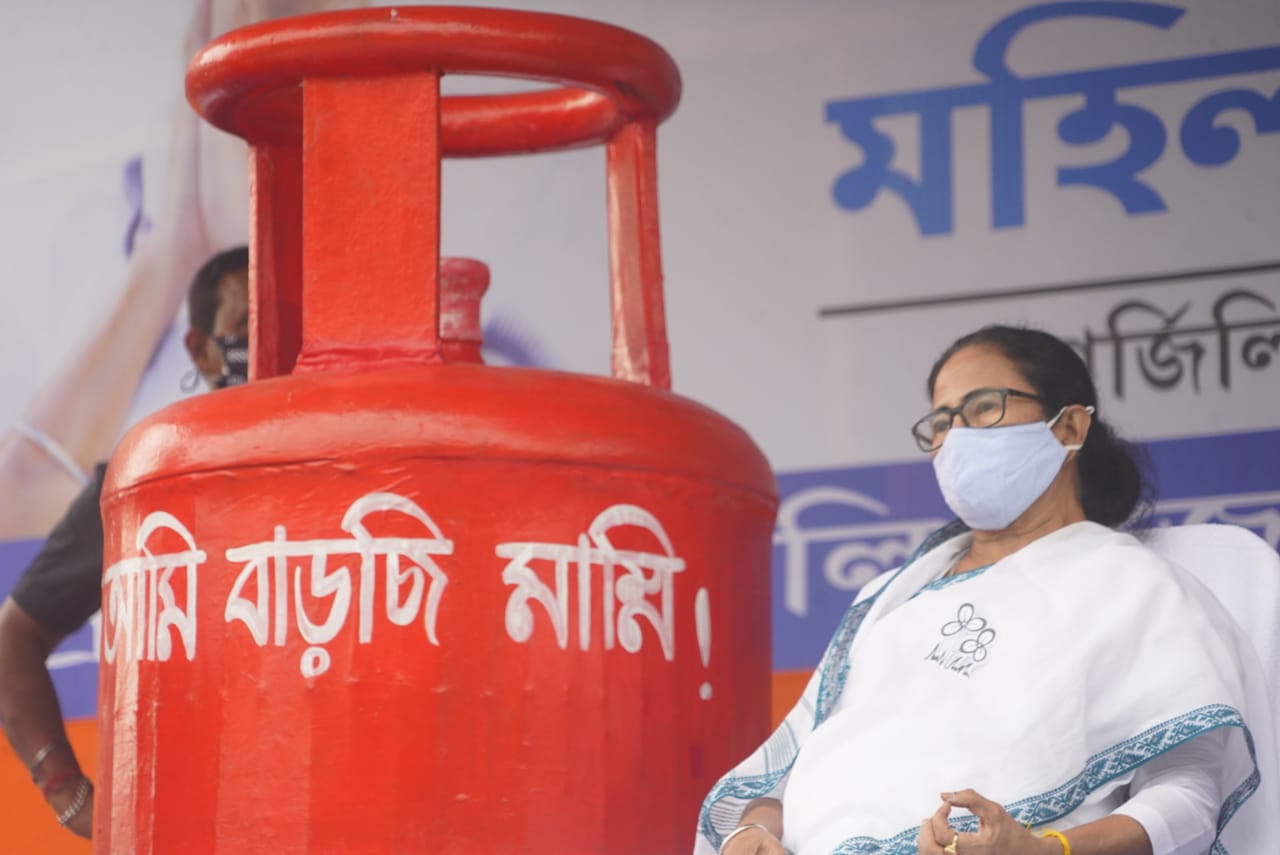 Banerjee, while addressing a rally here following her protest march over LPG price hike, said the Modi-Shah regime was “helming a syndicate”, and money changed hands freely under their watch.

Hitting out at Modi over his “ashol ‘parivartan” (real change) jibe during a rally in Kolkata earlier in the day, she said, “Parivartan will happen in Delhi, not in Bengal.”

The call for ‘parivartan’ was first given by the TMC during 2011 assembly polls, as it sought to end the 34-year Left rule.
Accusing the prime minister of “peddling lies to mislead the voters” in the poll-bound state, the CM demanded an explanation from Modi for not depositing Rs 15 lakh yet in the bank accounts of every citizen, as “promised by him” before the 2014 Lok Sabha polls.

“How much money has been accrued by selling Rail, Air India and Coal India Ltd? Before elections, it is Ujjwala and post polls it turns into ‘jumla’.

“How much money changed hands during the corrupt practises under Ujjwala Yojana? The entire country knows about the Modi-Shah syndicate,” Banerjee said, countering the BJP’s allegations that her dispensation has institutionalised a “cut-money culture” in the state.

Crude oil prices have dipped all over the world, but in India fuel rates have touched the roof, the feisty TMC supremo noted.

“You have made many empty promises. People will not accept your falsehood every day. We demand you make LPG cylinder affordable for every citizen of the country. You have made LPG cylinders inaccessible for the common man,” Banerjee stated during her address.

Listing her government’s achievements in Bengal, she said, “The state has undertaken several development projects, built metalled roads connecting major thoroughfares. The Centre, on its part, has done nothing.”

Referring to Modi’s dig at her over TMC’s ‘Khela Hobe’ poll slogan, she said, “It means we are ready for your challenges. And we are… A game (khela hobe) will be played before the elections. I am open to face-to-face debates.”

The PM, during the mega rally in Kolkata, accused Banerjee of “betraying” the people of the state who trusted that she will bring about a change after the Left rule.

“Bengal chose you in role of ‘Didi’ (elder sister) but you preferred being ‘bua’ (aunt) to your ‘bhatija’ (nephew Abhishek Banerjee),” he said.

Contending that the PM addressed an empty ground in Kolkata during the day, Banerjee said, “When Modi starts delivering his address in programmes like ‘Mann Ke Baat’, people feel scared that he will put them in trouble by announcing another anti-people move, like the 2016 notebandi.”

“He gives speech in Bangla, but the script is always written in Gujarati and kept under a transparent sheet of glass before him. He just pretends that he is speaking in Bangla without any help,” she said.

The CM also rebutted Modi’s claim that crimes against women are on the rise in the state, and said, “He has little idea about the ground situation. In Bengal, women can move around freely at 10 pm, unlike Uttar Pradesh or Madhya Pradesh (both BJP-ruled states).”

She insisted that the saffron party knew nothing about Bengal and its culture.

“Your party had vandalised Vidyasagar’s bust. Your party dishonoured Birsa Munda. Your party wrongly said Rabindranath Tagore was born in Santiniketan. This shows your depth of knowledge about Bengal and its culture,” she said.

Asking everyone to raise their voice against the “riot-mongering BJP,” Banerjee said, “People of Bengal, who had been living in peace casting aside barriers of community and language, would come under grave threat if a divisive force such as the saffron party comes to power in the state.”

Lashing out at the PM for “including his photo in COVID-19 vaccination certificates”, Banerjee further pointed out that Modi never flew down Bengal when the pandemic hit, “and was sitting at home in fear. But I travelled to different areas, visited hospitals.