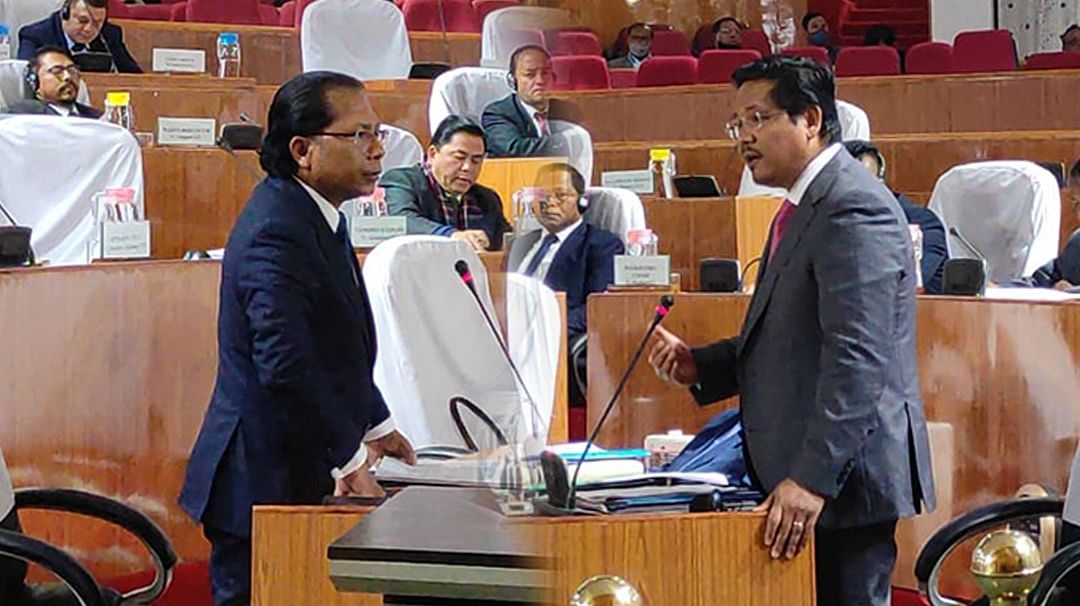 SHILLONG: The opposition Congress in Meghalaya Thursday said it will table a privilege motion against Chief Minister Conrad K Sangma for allegedly misleading the House on the power purchase agreement signed with NTPC in 2007.

Leader of Opposition Mukul Sangma stating this regretted that the attempt to mislead and misinform the House has come from none other than the leader of the House.

He alleged that the chief minister had deliberately with a predetermined motive misinformed the House about the PPA signed by the then Congress-led government with the NTPC in 2007.

In order to prevent this precedent to carry on in the future, it requires the members of the House to come up with a complaint for breach of privilege. Therefore, we have decided to table a privilege motion against the chief minister, Mukul Sangma said.

… They (Conrad govt) were trying to play to the gallery but the worst thing is that they have misinformed the House which amounts to breach of privilege of the House and with a sheer intent malafide and predetermined intent to hide the facts which requires their attention and correction.

The chief minister had alleged the then Congress-led government had signed a one-sided agreement due to which the state has to annually pay over Rs 130 crore to the NTPC despite not purchasing power from it for the past three years.

According to him, the government would have to pay Rs 3,300 crore approximately to the NTPC in the next 25 years.

Stating that this is not a case in isolation, Mukul Sangma said there were a numbers of such instances in the past and amounts to misinforming and misleading the House which attracts the provisions of the breach of privilege motion.

The chief minister had tried to misinform the people of the state through his misinformation inside the House saying that the state government has to pay Rs 11 crore to the NTPC per month, Mukul Sagma claimed.

Where is that Rs 11 crore mentioned here (in the PPA)? You go para by para, you will not see (it) but you will only see what is based on the provision of the law, he added.

The Leader of Opposition also questioned the failure of the chief minister to cancel the PPA with NTPC during his tenure as power minister in 2008-2009.

When they say this PPA is so bad and that it was signed in September 2007, Conrad K sangma was minister of power in 2008-09. He must have read this… Why didn’t he cancel at that point of time, he said

Stating that the PAA is a standard agreement, Mukul Sangma said itt was not signed only by the government of Meghalaya but by other states of the North East as well for drawing power from NTPCs Bongaigaon thermal power plant.

This is not an agreement formatted under the whims and fancies of individuals these are all mandated by the provisions of the law. Similar notifications have been issued to the Manipur government, Arunachal Pradesh government as that is the standard operative procedure to deal with the defaulters, he said while referring to load shedding being imposed in the state.

According to him, the regulations on tariff and the amount of power to be drawn by the beneficiary state are governed by the Electricity Act 2003. The tariff in respect of the generation companies owned by the Government of India is being fixed by the Central Electricity Regulatory Commissio).

The present state government does not want to address the concerns of the people relating to the Meghalaya Energy Corporation Limited and alleged irregularities in the implementation of various important projects designed to create a turnaround in the energy sector, he said.

They dont want to correct that because they are the author of that mismanagement, I have said in the House it is a well scripted modus operandi.Iit also includes posting and transfer of different officers. Whoever says no they are transferred, he added.