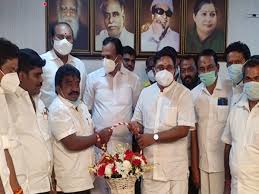 This came after AIADMK denied him a ticket to contest this Assembly election from his seat.

On Monday, the AMMK announced an alliance with Asaduddin Owaisi-led AIMIM for the Assembly elections. AIMIM will contest in three Assembly constituencies including Vaniyambadi, Krishnagiri and Sankarapuram.

Elections to the 234-member Tamil Nadu Assembly will be held on April 6 and the counting of votes will take place on May 2.