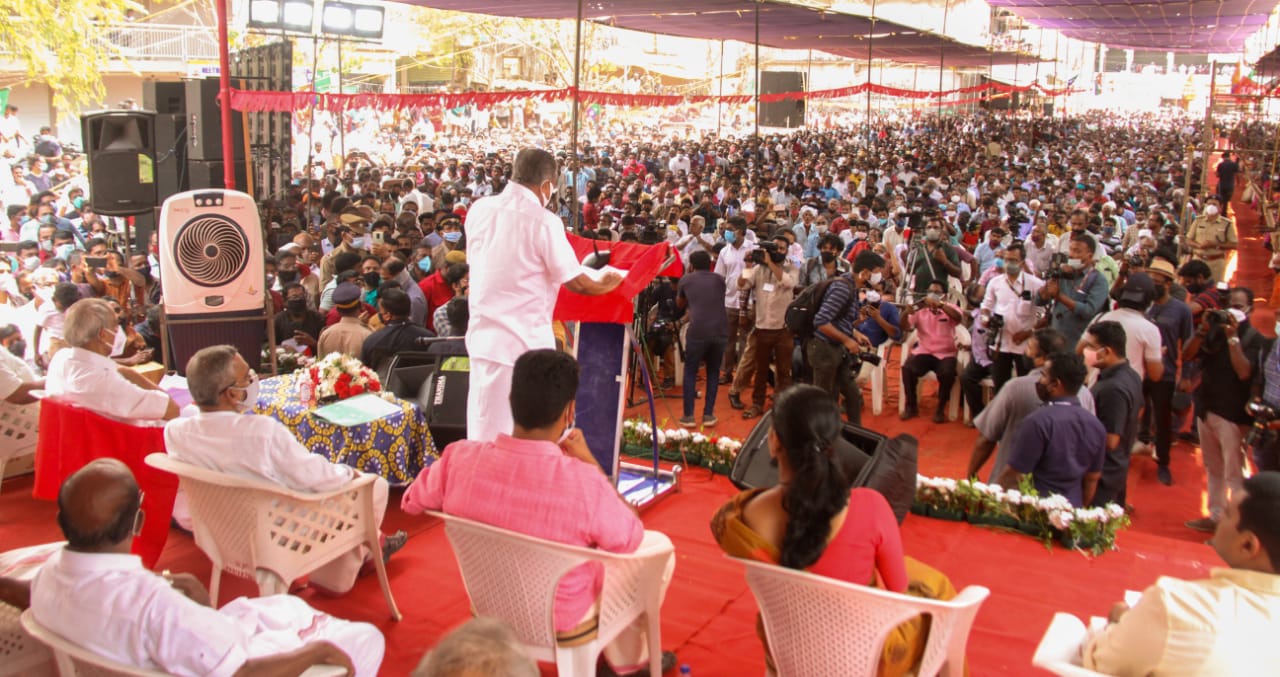 THIRUVANANTHAPURAM: The Left Democratic Front (LDF), led by the Communist Party of India (Marxist), which is in power in Kerala on Friday released its manifesto for the April 6 assembly polls, promising ‘pension’ for homemakers, creation of 40 lakh jobs for the youth and 15,000 startups over next five years.

It also assured raising the social security pension to various categories from the present Rs 1,600 to Rs 2,500 in phases and pledged to increase the income of farmers by 50 per cent.

The 900-point manifesto was released at the AKG Centre here jointly by LDF convenor and CPI (M) state secretary in charge A Vijayaraghavan, CPI Secretary, Kanam Rajendran and a galaxy of other leaders of the Left Democratic Front (LDF), which is seeking a second straight term.

Chief Minister Pinarayi Vijayan was campaigning in Palakkad district and could not be present on the occasion.

The LDF’s poll document said pension would be given for homemakers “acknowledging the value of their work”, becoming the latest party in the current poll season to woo women with such a dole after the ruling AIADMK, DMK and actor-politician Kamal Haasan’s MNM in Tamil Nadu and Trinamool Congress in West Bengal.

The LDF, however, did not give details of the amount of pension or any criteria for it.

Vijayaraghavan claimed the Left Front wasapproaching the people of Kerala with a report card of “a historic achievement” of fulfilling 580 of the 600 promises made during the 2016 election.

“We are entering the next phase of constructing a new Kerala. A sustainable development model needs to be realised on the basis of the progress made by the Pinarayi Vijayan government in the basic infrastructure sector.

“Along with expanding the welfare schemes for the poor and modern employment opportunities for future generations should also be created in Kerala,” the manifesto read.

To achieve all these, Kerala should be transformed into a knowledge society and continuation of the LDF government was essential, he said.

The manifesto assured 15,000 startups in coming five years to provide jobs for one lakh people. It also promised to attract private investments and plans an investment of Rs 10,000 crore in the industrial sector with priority given toIT, biotechnology, electronics and pharmaceutical industries.

For the farmers, it said their income would be increased by 50 per cent with the use of science and technology.

“A digital platform will be set up to market the products. This (rise in income) will be ensured through increase in agricultural productivity, timely reform of base prices, income from agricultural product processing and related incomes,” the document said.

The base price of rubber will be gradually increased to Rs 250.

The LDF also assured that a Rs 10,000 crore transgrid project will ensure no power shortage till 2040.

The LDF, if voted to power, would launch a public campaign based on crime mapping in the state to counter violence against women and the employment opportunities for the gender in Kerala will be increased by a quarter.

“Social welfare pensions will be increased to Rs 2,500 in various phases. The benefits of all scheme workers including Anganwadi, Asha workers, resource teachers, cooks, Kudumbasree staff, pre-primary teachers, NHM staff and school social counselors will be increased in a timely manner,” it said.

A Rs 5,000 crore package for coastal area development to protect the shores from erosion, increasing the minimum support price for rubber to Rs 250a kg, attaining self- sufficiency in production of eggs, milk and vegetables are among assurances in the manifesto.

Apart from more houses under the LIFE Mission project for the poor, the poll document also said dwelling units will be constructed for all members of tribal and Scheduled Caste communities, he said.

Claiming that “the biggest achievement” of the LDF government headed by Vijayan was ensuring “corruption-free” governance, he said the manifesto has been drawn up keeping in mind its aim to retain power.