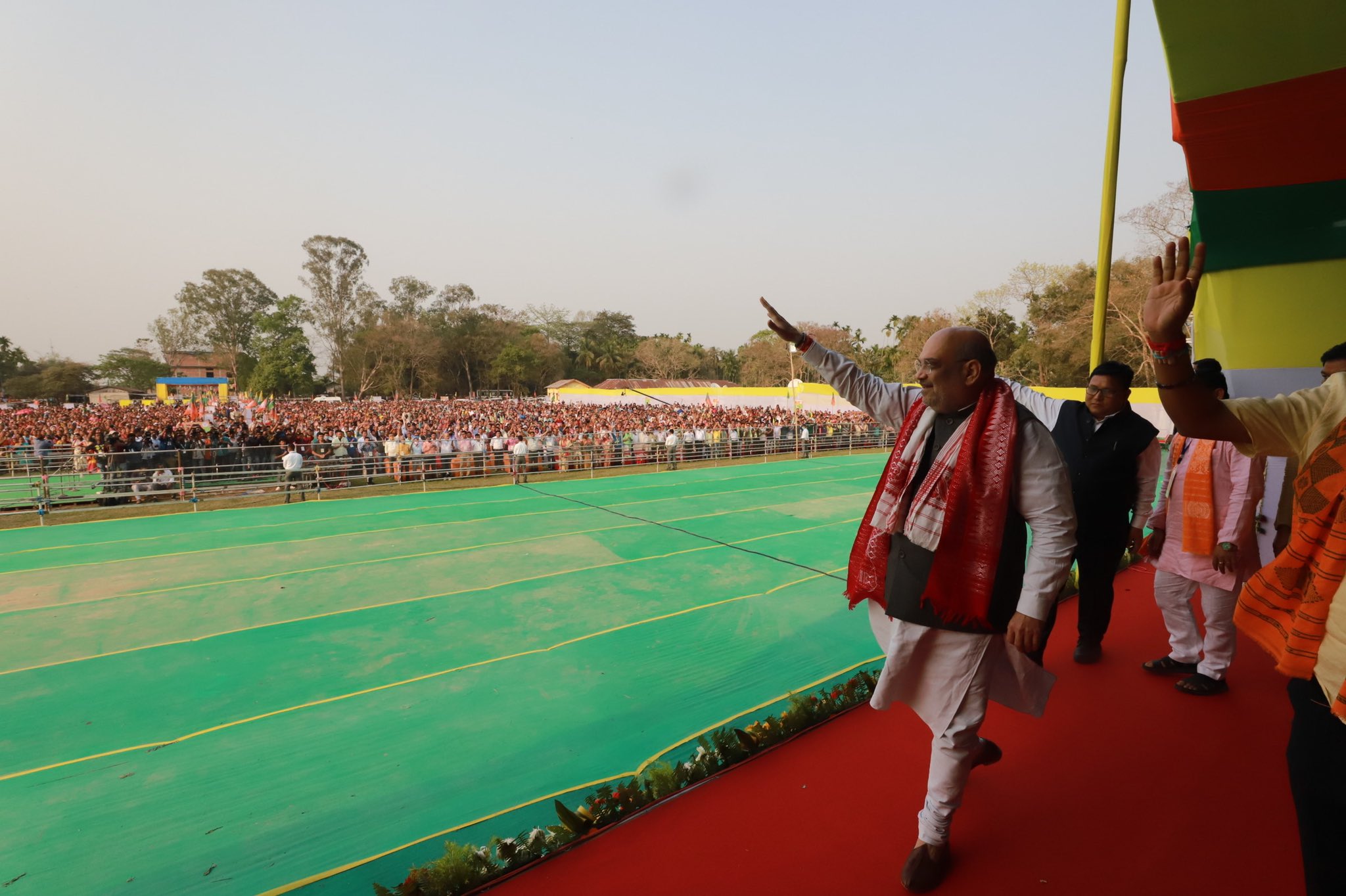 Shah said that he had recently visited the birthplace of Srimanta Sankardeva at Borduwa, where the land had been encroached upon by infiltrators during the Congress rule.

“I had asked the officials where my helicopter would land and they said at the place where the encroachers once lived. I was surprised that there was not a single encroacher (now) and this has been possible in the last five years under the Sarbananda Sonowal government in the state,” he said.

The Congress had not spared the holy land where the neo-Vaishnav saint was born, but the BJP is committed to take his message across the country.

The BJP government in the state has taken a major step to protect the religious institutions of the state by giving grants for the infrastructural development of ‘namghars’ which are more that 50 years old, he said.

He alleged that in the famous Kaziranga forests, the Congress and AIUDF had patronised both encroachers and poachers, but the BJP government had ensured that encroachers were removed and poaching of rhinos, the pride of Assam, stopped.

“Can a government, where there is Ajmal, be able to stop infiltration. It is only the BJP under the strong leadership of Prime Minister Narendra Modi which can do it,” he said.

Shah also alleged that five years ago when Congress was in power, there was agitation, violence, bomb blasts, deaths and curfews were common. “Aatankwad ka nanga naach charo aur chal rahi thi (the naked dance of insurgency was going on all around)”.

“In 2016, I had come to you as the party president promising that if the BJP forms the government in the state we will make it ‘aatankwad’ (insurgency), ‘ghuspetia’ (infiltrators), ‘andolan’ (agitation) and curfew ‘mukt’ (free).

“Today, I have come to tell you that the Sonowal-led BJP government has done that and taken the state on the path of development,” Shah said.

During the 15 years of Congress rule, there were different insurgent outfis in the state. However, during the last five years of BJP more than two thousand insurgents have surrendered and the Bodo Accord was signed with different factions of the NDFB which has brought permanent peace in the Bodoland Territorial Region (BTR), he claimed.

He also accused the Congress of a policy of divide and rule, while stating that BJP’s policy is ‘Sabka Saath, Sabka Vikas and Sabka Vishwas’.

The Congress has created a rift between Assamese and Bengalis, plains and hills and Upper and Lower Assam, while the “BJP has taken all smaller communities together and bonded them through development,” Shah claimed.

Referring to Majuli, Shah said that after 70 years of Independence, it was the Sonowal government that declared it a district and for the first time held a cabinet meeting there.

The prime minister had on February 18 announced a series of projects and schemes for the river island, including a Rs 700-crore bridge over the Brahmaputra to connect Jorhat and Majuli.

“Earlier, Majuli could be reached only by the river- route but recently Sonowal inaugurated a heliport here and now it can be reached by air and waterways while in a few years, it will be possible by road too,” Shah added.

He also said the prime minister has initiated a project to make Assam flood-free through satellite mapping and creation of water-bodies to store flood waters. Shah said within the next five years, the state would be made flood- free.

He appealed to the people of Majuli to ensure that Sonowal wins by a record margin.

Shah is on a day-long visit to the campaign at Jonai, Majuli and Udalguri along with addressing party workers in Guwahati.