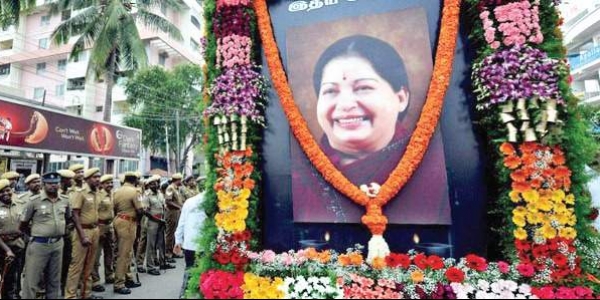 NEW DELHI: Jayalalithaa passed away in Chennai on December 5, 2016 after a prolonged illness and hospitalisation.

It was the DMK supreme leader M.K. Stalin who had first fired a salvo stating that the AIADMK leadership and its government had not conducted a proper investigation into the death of Jayalalithaa and that once the DMK is voted to power it will conduct an impartial inquiry into the circumstances that led to her death.

It led to a major public outcry with both Chief Minister K. Palaniswami and his deputy O. Panneerselvam retorting by saying that their government had constituted a single judge commission headed by the former Madras high court Judge, Justice Arumughaswamy.

The DMK youth wing leader, movie actor and son of M.K. Stalin, Udayanidhi Stalin had also in several public meetings said that the AIADMK leadership was not serious on the probe in the death of Jayalalithaa and that after the DMK government assumes office a proper investigation would be conducted.

Meanwhile, the Amma Makkal Munnetra Kazhagam( AMMK) leader and the nephew of V.K. Sasikala, TTV Dhinakaran had said that he had nothing to fear on any inquiry by any agency regarding the death of Jayalalithaa. The DMK had on several occasions said that there should be proper investigation on the role played by the “Mannargudi” family of V.K. Sasikala and TTV Dhinakaran.

The DMK has also said that the AIADMK leader and Deputy Chief Minister Panneerselvam had not deposed before the commission.

The AIADMK on Sunday petitioned the state Electoral officer and Chief Election commission against the DMK allegations. In the petition, the party has mentioned that DMK must be stopped from using the death of Jayalalithaa as an election propaganda.

The petition also stated that the subject is under the purview of a Judicial inquiry and that the AIADMK will have to take legal actions against the DMK leaders if the death of Jayalalithaa is being made an election issue.

In this article:AIADMK, DMK, Jayalalithaa