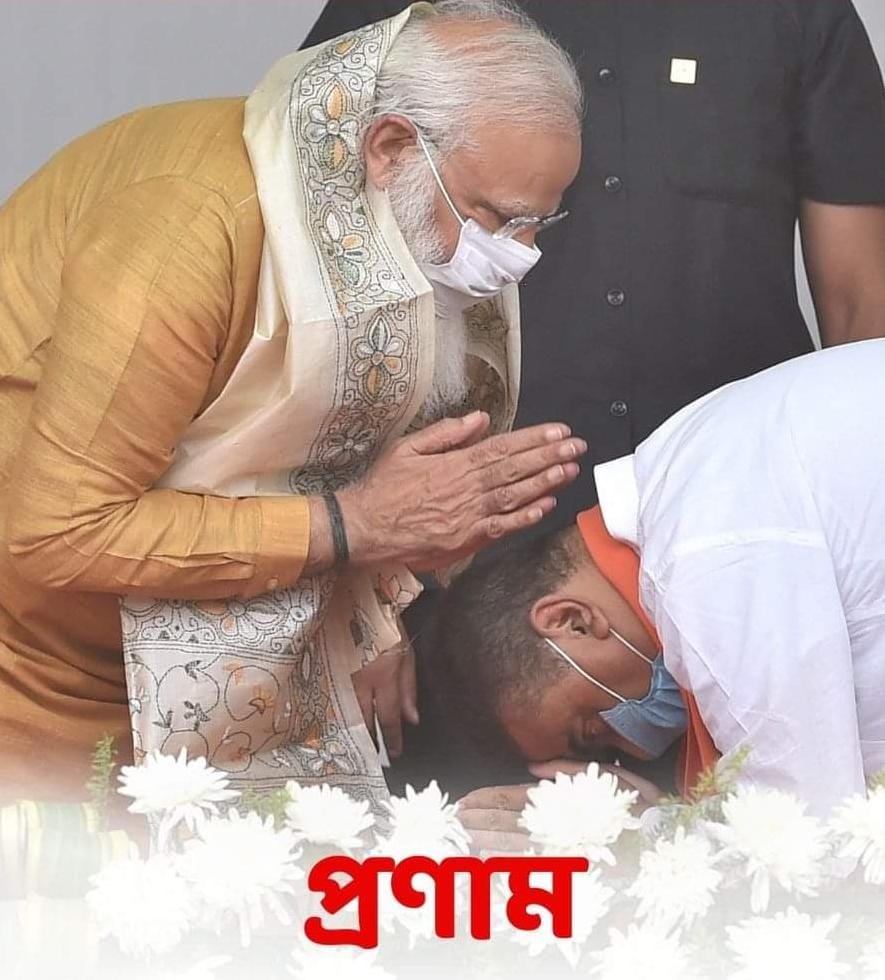 KANTHI:Bengal has brought together the nation through ‘Vande Mataram’, and on this land, CM Mamata Banerjee was terming people “bohiragoto”, Prime Minister Narendra Modi said on Wednesday, announcing that if voted to power, a son of the soil will be made the BJP chief minister of the state.

Addressing an election rally in Kanthi in the Purba Medinipur district, Modi said that Bengal was the land of icons like Bankim Chandra Chattopadhyay, Rabindranath Tagore and Subhas Chandra Bose and on this land, no Indian was an outsider.

“Bengal brought together the people of India through Vande Mataram, and on that land, Mamata-didi is talking about ‘bohiragoto’ (outsider). No Indian is an outsider here, they are children of Bharat Mata,” he said.

“We are being called ‘tourists’, fun is being made of us, we are being insulted. Didi, people of Rabindranath’s Bengal don’t consider anybody outsider,” Modi added.

When the BJP forms government in Bengal, the chief minister will be a son of the soil, he said at the rally amid loud cheers from his supporters.

Modi’s comments came amid an “insider vs outsider” debate with Banerjee asserting regularly that she won’t allow Bengal to be ruled by “outsiders” from Delhi or Gujarat, in a reference to the BJP and the prime minister.

The Trinamool Congress has even launched the ‘Bangla Nijer Meyeke Chaye’ (Bengal wants its own daughter) campaign, with party leaders calling BJP functionaries visiting the state as “election tourists”.

The prime minister said that Banerjee insulted the people of Nandigram with false accusations, and people would give her a befitting reply.

“You are maligning Nandigram and its people before the entire country. This is the same Nandigram that gave you so much. The people of Nandigram will not forgive you and will give you a befitting reply,” he said, apparently referring to the March 10 incident in which the chief minister was injured.

Modi said that BJP would make every scheme in the state scam-free and bring in transparency, hitting out at the TMC over ‘cut money’, ‘tolabaji’ (extortion) and ground-level corruption.

“The relief for Amphan was looted through the ‘bhaipo (nephew) window’,” he alleged.

The prime minister said that Banerjee was talking about ‘Duare Sarkar’ (government at doorstep), while she will be shown the door on May 2.

The popular ‘Duare Sarkar’ programme was launched by Banerjee’s government months ahead of the election, delivering services through special camps at neighbourhoods.

The chief minister has also promised that she will ensure doorstep delivery of ration, if voted to power for the third time.

Always an honour to meet our Hon’ble @PMOIndia Shri @NarendraModi Ji & humbled to get his Aashirvad at #Kanthi today.

His dynamic and inspirational leadership perennially guides us! pic.twitter.com/PDkUkQ8YuO

The prime minister was campaigning in Kanthi, the hometown of BJP leader Suvendu Adhikari.