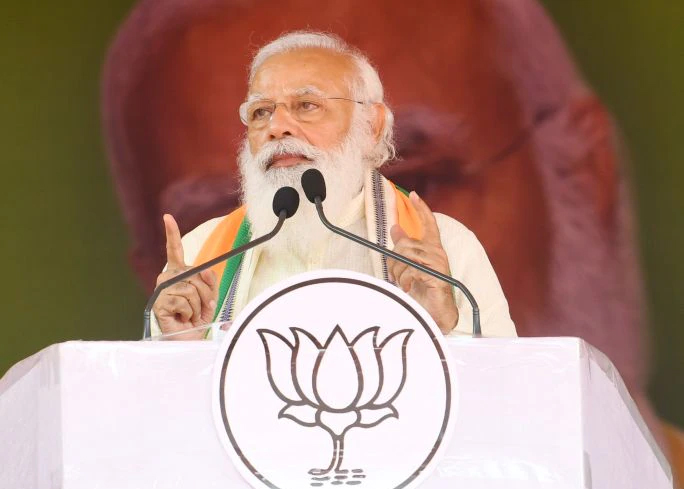 KANYAKUMARI: Prime Minister Narendra Modi on Friday slammed the Congress as ‘high-handed’ without an understanding of local sensibilities and asserted that his government does not see people’s caste or faith before serving them.

He also vowed to to protect fishermen’s interests, saying no Tamil fishermen is now in Sri Lankan custody.

He appealed to people to vote for Pon Radhakrishnan, BJP leader and former union minister, who is contesting the April 6 bypoll to the Kanyakumari Lok Sabha seat.

“A separate ministry is looking after fishermen’s issues. The DMK supported UPA, left the fishermen to their own fate. I assure the fishermen that their safety is NDA’s priority.”

A few days ago, “we ensured the release of fishermen from Sri Lanka. This includes 40 fishermen and four boats from Tamil Nadu. Currently no Indian fishermen is in Sri Lankan custody,” he said.

While his party and government focused on development,the opposition has reduced itself to a ‘dynastic club.’ “All they want is secure positions of their own children, grandchildren and they are not bothered about your sons and daughters.”

In central Delhi, ‘very valuable real estate’ was given for the memorial of one ‘dynasty’ (Nehru memorial), but his government created a memorial for former President A P J Abdul Kalam in Tamil Nadu.

“We believe the sweat of every Indian makes the nation, not four generations of one or two dynasties.

Today the mood of the nation is clearly against the politics of nepotism and entitlement.”

The opposition loved calling people anti-democratic, but they should see the ‘nearest mirror,’ said.

Modi reminded the rally that Congress invoked Article 356 several times and both DMK and AIADMK governments in Tamil Nadu had been dismissed by that party in the past.

Having Congress, hence, in any coalition meant having a high handed ally that does not understand local sensibilities, he alleged.

“Our ideology is sab ka saath, sab ka vikaas and sab ka viswaas,” and at the root of this mantra lay the spirit of compassion towards everyone, he said.

“Our government does not see people’s caste, creed or faith before serving them. Ours is a government for everyone,” he asserted and recalled his government’s efforts to buttress his point.

When nurses from Kerala were abducted while working in Iraq, the government did everything possible to bring them back home safely.

Similarly, Father Alexis Premkumar, who belonged to Tamil Nadu and Father Tom from Kerala, were safely rescued from Afghanistan and Yemen, he said, adding “let those who believe in conflict further it. We believe in compassion and we will always serve the people with that spirit.”

Last year, when the COVID-19 pandemic struck, about five lakh people from Tamil Nadu stranded abroad were brought back safely through the ‘Vande Bharat Mission.’

“While bringing them back, we never saw what is their caste, what holy book they read, what do they do,..they are the people of India and we stand ready to help them.”

Kanyakumari, abutting Kerala, is home to a sizable chunk of Christians of various denominations.

On the farm sector, the PM said government helped ryots manage soil, better their irrigation practices and make value addition, adding, “we are well on track to double the income of farmers.”

His government is sensitive to farmers’ demands and that was why the farm sector was being modernised to ensure more credit and better markets. The Minimum Support Price for copra during the NDA tenure was higher than what was fixed in the UPA’s term.

Increasing opportunities through port-led development and modern infrastructure, capacities in current ports were being scaled up and ‘new ports are being planned,’ he said.

“We are making operations more investor friendly. This would generate more jobs for locals.”

Pointing to the government’s major push for ‘blue economy to better incomes, the PM outlined encouragement for seaweed cultivation, better boats and navigation material, in addition to credit for fishermen.

He also referred to initiatives on connecting ports to the hinterland and expanding waterway networks that would boost ease of living.

Fishermen and fisheries sector would gain from the recent Cabinet approval for Production Linked Incentive Scheme in food processing, he said.

Bypoll will be held on April 6 for the Kanyakumari Lok Sabha constituency alongside the Assembly polls.