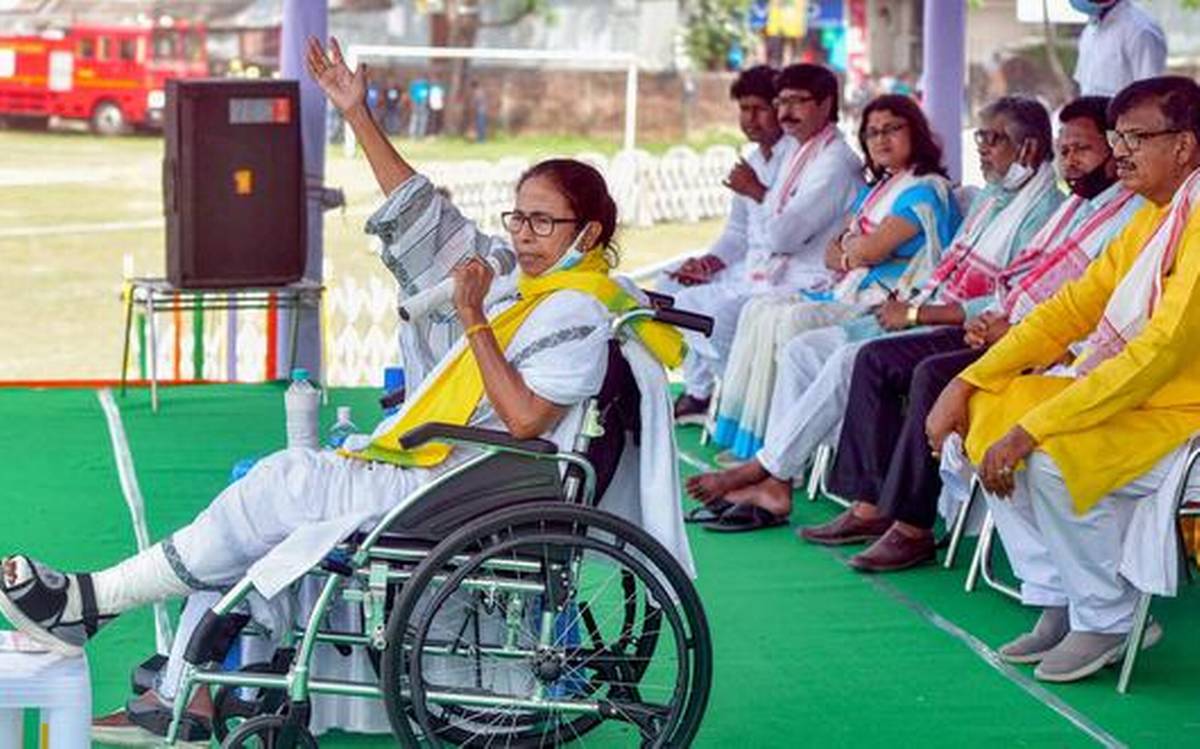 The TMC chief, while addressing an election rally in Raidighi in South 24 Parganas district, also called upon Muslims not to “fall in the trap of a BJP-aided party from Hyderabad and its Bengal ally that are out to polarise votes.”

Her jibe was apparently aimed at Asaduddin Owaisi-led AIMIM and Abbas Siddiqui’s ISF. Both Owaisi and Siddiqui had earlier denied the TMC’s insinuations. The ISF is fighting the elections in alliance with the CPI(M) and the Congress.

The TMC supremo also urged Hindus to be on the guard against the BJP’s attempts to “instigate communal clashes” and called upon them to chase away outsiders sent to foment trouble in their respective localities.

Affirming her Hindu identity, in an apparent attempt to counter the minority appeasement charge against her, Banerjee said, “I am a devout Hindu who recites Chandi mantra every day before leaving home. But I believe in our tradition of giving respect to every religion.”

Taking a dig at BJP leaders having lunch at houses of Dalits, she said, “I am a Brahmin woman. But my all-time associate is a Scheduled Caste woman who takes care of all my needs. She also cooks food for me.”

“I need not advertise this as those bringing five-star hotel lunch to eat at the courtyard of a Dalit home are anti- Dalit, anti-backward caste and anti-minority in nature,” she said.
The TMC chief claimed that if elected to power in West Bengal, the BJP will implement the Citizenship (Amendment) Act and the National Register of Citizens (NRC), forcing “many citizens to leave”.

“They will divide West Bengal and its people. Remember how they deleted the names of 14 lakh Bengalis and 2 lakh Biharis in the updated NRC in Assam,” she said.

Banerjee alleged that central forces are terrorising people at every home 48 hours before polling, asking them to vote for the BJP.

“Don’t be intimidated. Mothers and sisters challenge them. We have no problems if the forces act impartially to ensure free and fair elections but if they act on behalf of a particular political party, we will protest,” she said,

The chief minister, who is contesting her former lieutenant and BJP candidate Suvendu Adhikari in Nandigram, alleged that there were attempts by “outsiders” to rig the elections in the constituency in Purba Medinipur district.

“There were attempts by outsiders to rig the elections in Nandigram by visiting every house before polling. Still, I will win handsomely from the seat. One local goon was accompanied by outsider goons in Nandigram. This is their pattern,” she said.

Taking a dig at TMC turncoats, she said sitting Raidighi MLA and actor Debasree Roy joined the BJP after not getting a party ticket from the seat.

“We don’t involve such opportunists in our party,” she said.

Noting that the TMC is fighting the elections on the development plank, she said, “There has been infrastructural development in Sunderbans. The state government has taken an initiative to provide egg meal at Rs 5 and women involved in SHGs in the region are involved in it.

AHMEDABAD: The ruling BJP recorded a massive victory in the local body polls in Gujarat on Tuesday by winning clear majority in all 31...