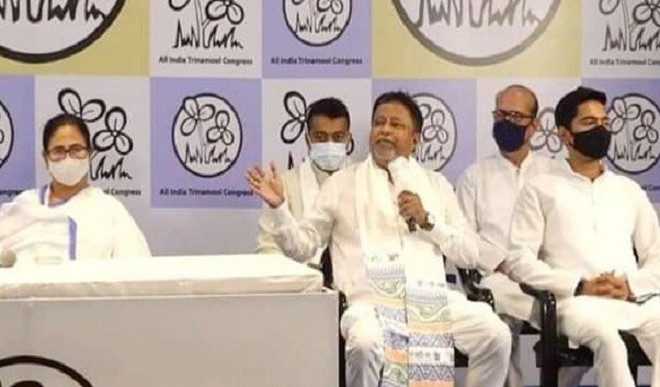 KOLKATA: Senior TMC leader Mukul Roy was elected unopposed as a member of the Public Accounts Committee (PAC) of the West Bengal Assembly on Friday despite opposition by the BJP over his nomination as he was elected as an MLA on a saffron party ticket.

Roy was among the 20 MLAs who had filed nominations for the memberships of the PAC on Wednesday.

The PAC has the strength of 20 members.

Nominations of all 20 candidates were found valid and they were declared elected unopposed.

The 294-member Bengal assembly has 41 committees and the PAC works as the audit watchdog of the House.

Speculations are rife that Roy may be appointed PAC chairman.

The TMC had submitted 14 names, and the BJP had put forward six names. Roy figured in the list of 20.

Roy, officially a BJP MLA from Krishnanagar Uttar, switched over to the TMC last week but did not resign from the assembly or was disqualified under the anti-defection law.

On Friday, the West Bengal Assembly Secretary made the list public, which has name of Mukul Roy in it.

Noted economist and BJP MLA Ashok Lahiri and Leader of the Opposition Suvendu Adhikari also featured in the list.

The BJP and the TMC had got involved in a tussle after Roy, who left the saffron party to return to the ruling party on June 11, filed his nomination for induction in the PAC of the state assembly.

The BJP had submitted a petition to state assembly speaker Biman Banerjee demanding disqualification of Roy, a legislator from Kishnanagar North constituency, under the anti-defection law since he did not resign from the party before switching sides.