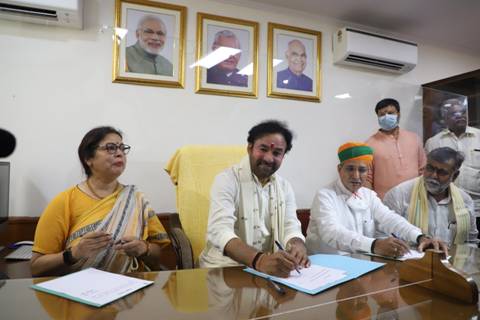 Speaking to media, Sh Reddy said that we will work towards achieving the vision of the Prime Minister with full commitment.

Reddy was elected as a Member of Parliament to 17th Lok Sabha in 2019, from Secunderabad Constituency, Telangana.

Reddy has led several unique initiatives like his work for the child-heart patients which became a movement and won him the Best Child-Friendly Legislator Award in the AP Legislative Assembly by UNICEF (United Nations).

He also started a campaign against terrorism and organised International Youth Conference against Terrorism (IYCT) in New Delhi in which over 193 delegates participated from over 54 countries. He also conducted “Seema Suraksha JagaranYatraand ‘Telangana PoruYatra’.

Sh Reddy has also received the Outstanding Youth Leadership Award for the year2009 by Maryland India Business Round Table (MIBRT), USA and Conferred a medal by Union of Bulgarian Commandos for his contribution towards Global Peace at Sophia, Bulgaria.

Lekhi is an advocate by profession and elected Member of Lok Sabha since 2014 from New Delhi Parliamentary Constituency. She has been a member of several committees including important Drafting Committees for Bills.

Meghwal is member of Lok Sabha since 2009 from Bikaner Constituency in Rajasthan. Prior to his new charge, he was holding charge of Minister of State for Parliamentary Affairs and Heavy Industries and Public Enterprises.

During his 2nd term as an MP, he was Chief Whip of BhartiyaJanta Party in Lok Sabha. Speaker of Lok Sabha also nominated him as the Chairman of House Committee, Lok Sabha. He has served as member of several important committees. He was awarded the Best Parliamentarian in 2013.