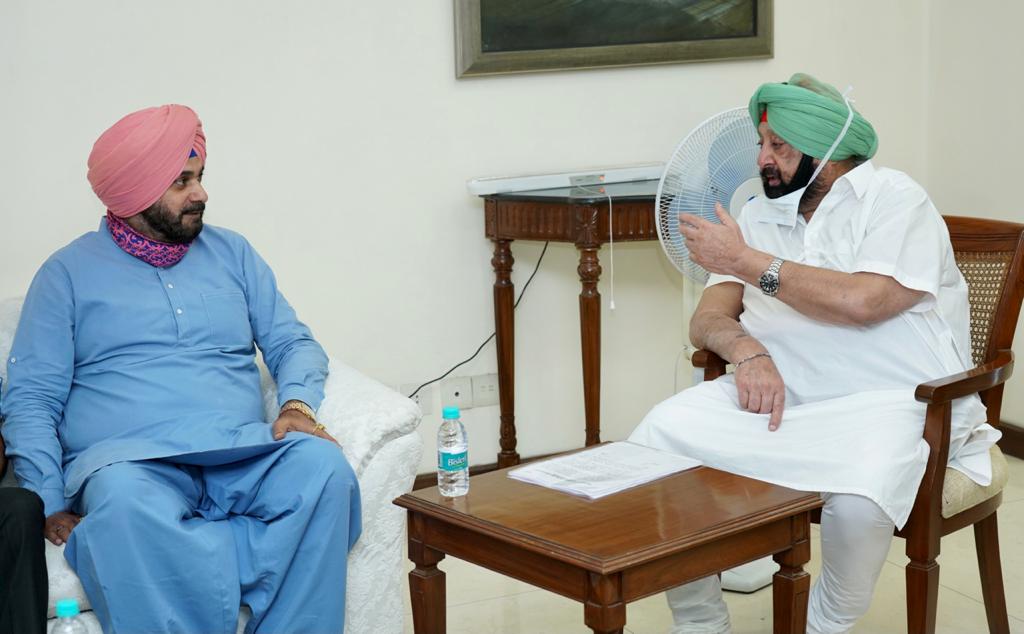 CHANDIGARH: Newly appointed Punjab Congress president Navjot Singh Sidhu and the four working presidents met Chief Minister Amarinder Singh Tuesday demanding action on five key issues’, only to be told by the CM that they are already in advanced stages of resolution.
This was the first meeting of the top Punjab Pradesh Congress Committee (PPCC) team since the revamp in the organisation, following a long tussle between Sidhu and the chief minister.
Along with a statement on the meeting, the chief minister’s office also released a picture of the two shaking hands.

Met CM Punjab to demand immediate action on longstanding issues concerning the People of Punjab … Echoing sentiment of lakhs of Congress Workers from across Punjab !! pic.twitter.com/BPGV91uQWh

Separately, Sidhu’s PPCC released a letter it handed over to the CM at the meeting, reminding him also of the need for a decisive” leadership in the state.

The Congress state unit sought immediate action on the 2015 desecration of the Guru Granth Sahib and the police firing on protesters, arrest of the big fish in drug rackets, cancellation of power purchase agreements, rejection of Centre’s new farm laws and demands by government employees.
However, the CM told the newly constituted state Congress leadership that all the key issues of concern raised by them were already in advanced stages of resolution by his government, which had been working on them in close coordination with the party, Amarinder Singh’s spokesperson said.
Sidhu was accompanied by working presidents Sangat Singh Gilzian, Sukhwinder Singh Danny, Pawan Goel and Kuljit Singh Nagra when he met the CM at the Civil Secretariat here.
In their letter, the office-bearers said, Today, Punjab needs a stern, decisive, inclusive and compassionate leadership more than ever before to fulfil genuine demands of every Punjabi.
They also referred to the to-do list earlier dictated by the party’s central leadership to Amarinder Singh, who has only reluctantly accepted Sidhu’s elevation.
Punjab Congress workers stand firm in their resolve with our esteemed high command’s 18 point agenda our guide book to deliver justice to every Punjabi, the PPCC office bearers’ wrote.
According to the press release from the CM’s office, he told the PPCC team that his government had already implemented most of the party’s poll promises and the other pending issues were also being resolved.
His government was committed to the implementation of all poll promises, Singh said, describing the meeting as cordial.
The CM suggested that the party office bearers and the government should work together and offered to meet them regularly. He also urged them to make people aware of the government’s performance.
Your win is my win and our win is the party’s win, and we need to work together in the interest of the state and its people, the CM said.
Tweeting on the meeting, Sidhu said, Echoing sentiment of lakhs of Congress Workers from across Punjab !!.
Nothing great was ever achieved without an act of decision. We request you to act immediately, the PPCC letter said.
Referring to an issue over which Sidhu has consistently targeted Singh, the letter said people demanded justice for Punjab’s soul by punishing the main culprits behind the 2015 sacrilege and the police firing at Kotkapura and Behbal Kalan.
On the Centre’s farm laws, the PPCC called for their complete rejection and not merely recommending amendments to a few clauses a reference to bills passed earlier in the Punjab Vidhan Sabha.
They delegation also came out in support of protesting government teachers, doctors and nurses.
A compassionate leadership that is ready to listen and take steps for inclusive development of all is needed. Govt. must open doors for discussion, consultation and deliver what it can, considering its fiscal means immediately, the letter said.
Nothing great was ever achieved without an act of decision. We request you to act immediately, the PPCC leaders wrote.