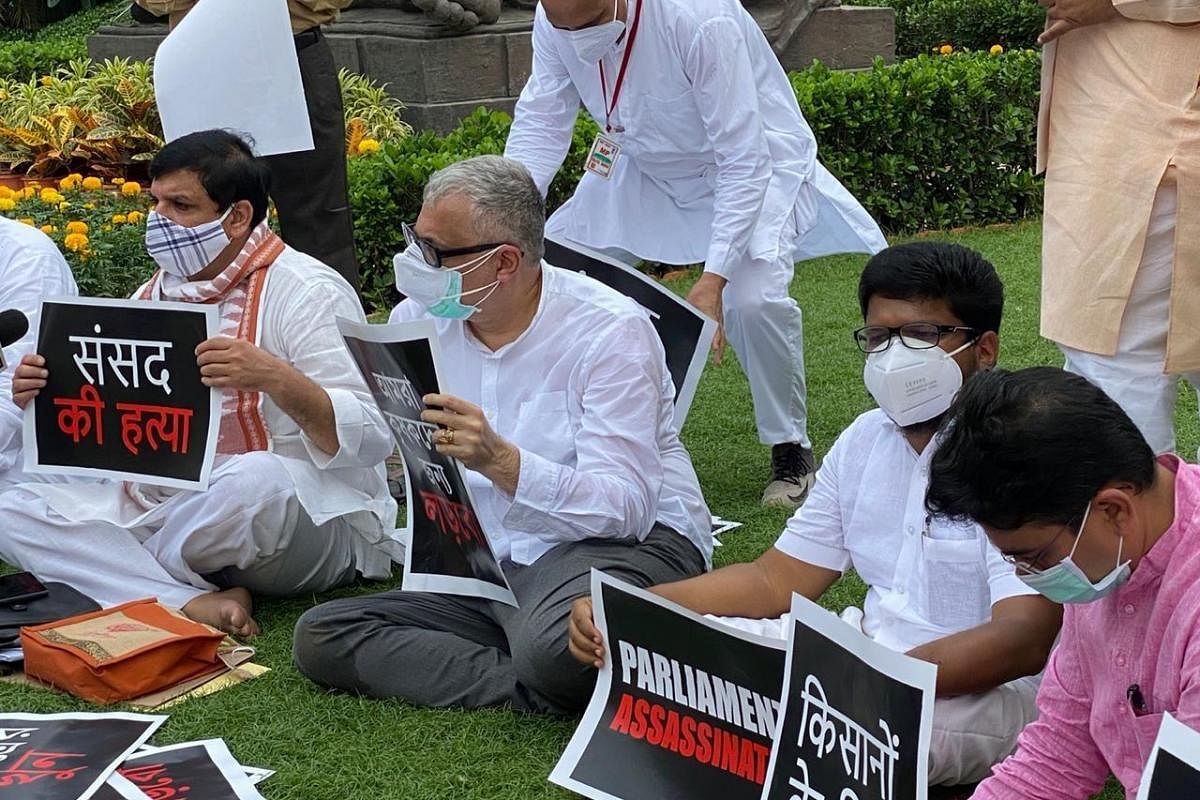 NEW DELHI: Rajya Sabha Chairman M Venkaiah Naidu on Wednesday suspended six TMC MPs for the day for carrying placards while protesting along with other opposition MPs over the Pegasus spying issue.
Just as witnessed since the start of monsoon session, slogan-shouting TMC and other opposition MPs trooped into the well of the House, some holding placards, to demand a discussion on the issue of Israeli-made, military-grade Pegasus spyware allegedly being used to snoop on opposition leaders, government critics and journalists.
Naidu took exception to the placards, which had anti-government slogans, before adjourning the proceedings of the House till 2 pm.
He first asked members to go back to their seats and then threatened to invoke rule 255 against those holding placards.
As the members refused to budge, he ordered that those “disobeying the chair and raising placards shall leave the House under rule 255.”
He, however, did not name anyone and said Rajya Sabha Secretariat will give the list.
Later a Parliamentary Bulletin identified the six MPs suspended for the day as Dola Sen, Md. Nadimul Haque, Abir Ranjan Biswas, Shanta Chhetri, Arpita Ghosh and Mausam Noor.
These “members of the Rajya Sabha who entered the well of the Hosue displayed placards, disobeyed the Chair and whose conduct was grossly disorderly in the House this morning (August 4, 2021) have been directed to withdraw immediately from the Council under rule 255 by the Chairman,” it said.
The six MPs, it said, “shall absent themselves during the remainder of the day’s meeting.”
Earlier soon after taking of oath by new member Jawhar Sircar and laying of official documents on the table of the House, Naidu said though he has not admitted notices given under rule 267 by Ramgopal Yadav and Vishambhar Prasad Nishad of the Samajwadi Party and V Sivadasan of the CPI(M) over farmers agitation over three farm laws, a discussion on the issue under a different rule has been admitted.
“I have gone through it. It is an ongoing issue but important. So it is admitted for discussion under other provision,” he said.
A notice under rule 267 calls for setting aside of the business of the day to take up discussion on the issue being raised.
Naidu, however, rejected 267 notices by Sukhendu Sekhar Roy (TMC), Mallikarjun Kharge and K C Venugopal (both Congress), CPI(M)’s Elamaram Kareem and V Sivadasan and Binoy Viswam of the CPI over the Peagus issue.
“Now there is agreement about farmers’ agitation. And also about price rise, economic situation. The government has also expressed willingness to discuss. Let us discuss the farmers’ issues. Let us discuss the economic situation, price rise and other issues,” he said.
Just then TMC and other MPs holding placards rushed into the well.
Naidu said this is not the way. “Please go back to your seats.”
“All these members who are in the well of the House with placards… all of them are named under rule 255. I direct these members who are in the well of the House to go back to their seats, otherwise, you are named and you are suspended for the day,” he said.
But the MPs refused to budge.
“Please obey the chair (and) go back to your seats,” he said as opposition MPs shouted, “We want discussion on Pegasus.”
Naidu then asked for the names of the MPs holding placards.
As Rajya Sabha Secretariat started collecting names, Naidu said, “Whoever is in the well, disobeying the chair and then raising these placards, they are all asked to leave the House under rule 255.”
MPs named under rule 255 have to withdraw from the House proceedings for the rest of the day.
“You know what will happen… Secretariat will give the list,” he said before adjourning the proceedings till 2 pm.

Even after the House proceedings were adjourned, the TMC and other opposition MPs did not leave the House.