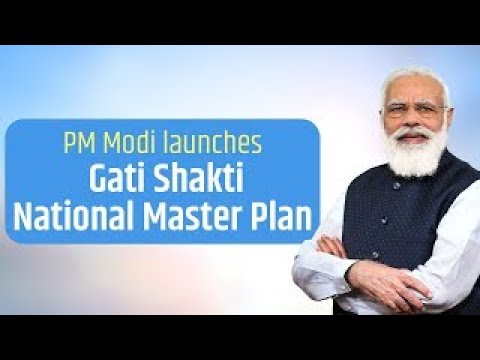 Addressing the gathering, the Prime Minister noted the auspicious day of Ashtami, the day of worshiping Shakti and said that on this auspicious occasion, speed of nation’s progress is also getting new Shakti.

He said that with the resolve of aatmnirbhar Bharat, the foundation of India for the next 25 years is being laid today. PM Gati Shakti National Master plan will take the confidence of India to the pledge of aatmnirbharta. “This Masterplan will give impetus (Gati Shakti) to 21st century India,” the Prime Minister said.

The Prime Minister stressed that the people of India, Indian industry, Indian business, Indian manufacturers, Indian farmers are at the center of this great campaign of Gati Shakti. It will give new energy to the present and future generations of India to build the India of the 21st century and will remove the obstacles in their path.

The Prime Minister said that over the years, the signage ‘work in progress’ became the symbol of lack of trust, He said progress requires speed, eagerness and collective efforts. Today’s, 21st century India, he said, is leaving behind old systems and practices.

We have not only developed a work culture of completing the projects within the stipulated time frame but efforts are now being made to complete the projects ahead of time”, he added.

The Prime Minister lamented the fact that the subject of infrastructure in our country has not been a priority for most political parties. This is not even visible in their manifesto.

Now the situation has come that some political parties have started criticizing the construction of necessary infrastructure for the country, the Prime Minister said.

This despite the fact that it is globally accepted that the creation of quality infrastructure for Sustainable Development is a proven way, which gives rise to many economic activities and creates employment on a large scale, the Prime Minister pointed out.

The Prime Minister said that due to the wide gap between macro planning and micro implementation problems of lack of coordination, lack of advance information, thinking and working in silos are leading to hampered construction and wastage of budget. Shakti gets divided instead of getting multiplied or enhanced, he said. PM Gati Shakti National Master Plan will address this as working on the basis of the master plan will lead to optimum utilisation of resources.

He recalled 2014 when he took over as Prime Minister when he reviewed hundreds of stuck projects and put all projects on a single platform and tried to remove hurdles.

He expressed satisfaction that now the focus is on avoiding delays due to lack of coordination. The Prime Minister said now with the whole of government approach, the collective power of the government is being channelled into fulfilling the schemes.

Because of this, many unfinished projects are being completed for decades now, he said.

The Prime Minister remarked that the PM Gati Shakti Master Plan not only brings together the government process and its various stakeholders but also helps to integrate different modes of transportation. “This is an extension of holistic governance”, he said.

The Prime Minister elaborated upon the steps taken to increase the speed of infrastructure development in India. He said that the first interstate natural gas pipeline in India was commissioned in 1987. After this, till 2014, i.e. in 27 years, a 15,000 km long natural gas pipeline was built. Today, work is going on for a more than 16,000 km long gas pipeline across the country. He added that this work is targeted to be completed in the next 5-6 years.

The Prime Minister said before 2014, the metro rail was running on only about 250 km of track. Today the metro has been expanded up to 700 km and work is going on in the 1000 km new metro route. In the five years before 2014, only 60 panchayats could be connected with optical fibre. In the last 7 years, we have connected more than 1.5 lakh gram panchayats with optical fibre.

The Prime Minister said in order to increase the income of the farmers and fishermen of the country, the infrastructure related to processing is also being expanded rapidly. In 2014, there were only 2 Mega Food Parks in the country. Today 19 Mega Food Parks are functioning in the country. Now the target is to take their number to more than 40. There were just 5 waterways in 2014, today India has 13 functional waterways. Turnaround time of the vessels at the ports has come down to 27 hours from 41 hours in 2014. He said that the country has realised the pledge of One Nation One Grid. Today India has 4.25 lakh circuit kilometre power transmission lines compared to 3 lakh circuit kilometers in 2014.

The Prime Minister expressed the hope that with the development of quality infrastructure, India can realize the dream of becoming the business capital of India. He said our goals are extraordinary and will require extraordinary efforts. In realizing these goals, PM Gati Shakti will be the most helpful factor. Just as JAM (Jan Dhan, Aadhar, Mobile) trinity revolutionized the access of government facilities to the people , PM Gati Shakti will do the same for the field of Infrastructure, he added.