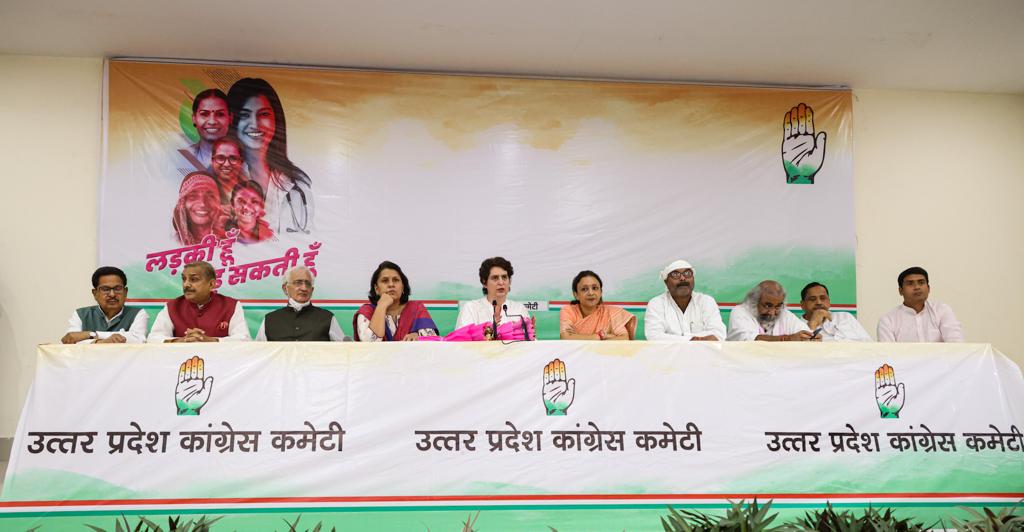 LUCKNOW: Facing an uphill task of consolidating its support base in Uttar Pradesh, the Congress on Tuesday said it will give 40 per cent tickets to women in the coming assembly elections slated for early next year.
The party’s national general secretary Priyanka Gandhi Vadra in charge of party affairs in Uttar Pradesh made this announcement at a news conference here, saying the decision is aimed at making women, who constitute roughly half the vote bank, a “full-fledged partner in power”.

The AICC general secretary tasked with regaining the party’s lost ground in the political heartland, however, was non-committal about contesting the upcoming state polls herself.

“It has not been decided as yet,” she quipped in response to a question on the possibility of her contesting the polls.
Congress which could win only seven seats in the 403-member UP house in 2017 polls has decided to put its bet on women in the elections early next year.
It is the party’s promise to give 40 per cent tickets to women in the coming elections. Had I had my way, I would have given 50 per cent tickets to them, Priyanka said, adding it could be taken forward in the 2024 elections.
“There is no hidden meaning behind it. We want women in politics to become full-fledged partners in power. We have decided that in the upcoming assembly polls in Uttar Pradesh, the Congress party will give 40 per cent of tickets to women,” she said.
The announcement by the Congress leader was greeted with the bursting of firecrackers and slogan-shouting by women workers who were watching the press conference on a large screen installed in the party office.
Asked if she will also enter the electoral fray, Priyanka Gandhi, keeping her options open, said, It has not yet been decided. There is still some time for elections and I will think about it and take a decision later.
She was not forthcoming even on whether a woman would be projected as the CM face in the state after today’s announcement and said I will tell this later when I want.
Elaborating on why this decision has been taken, she named a number of women and girls whom she had met in the state since 2019 and said it was for them and for every woman of UP who wants justice, change and unity and also wants that her state progresses.
Exhorting women of all sections who want to bring a change to not wait as no one will help them or extend security for power here has become something that crushes people.
Women will have to come forward if the country has to be taken forward on the path of equality and participation and has to be pulled out of the politics of caste and religion, she said.
Women will have to do this themselves, she added, asking the prospective women candidates to apply for tickets by November 15.
To a question, Priyanka said that participation of women in the party will improve with this decision taken in UP.
This decision has been taken with the approval of all. The main thinking is that women are being divided into castes and religion and they are failing to emerge as a force by getting united, she said.
Taking a dig at the ruling party and referring to the Ujjawala scheme, she said, Political parties think they can please women only by giving gas cylinders and Rs 2,000.”
To a question, she said she does not feel fielding women members of various leaders’ families in elections is a bad thing in the name of women participation.
It is not all that bad if a woman belonging to a political leader’s family is given a ticket as they contest and become capable, she said, citing an example of an Amethi district’s gram Pradhan who fielded his wife and came to her sometime later seeking her help to control his wife who had begun taking her own decisions.
To another question, if the party will get strong women candidates for the 2022 polls, she said women will become stronger by contesting elections and the party will extend all support to them.
She said this decision has been taken in UP where she is looking after the party affairs and it can prove to be an example for other states where the Congress has its government and elections are due soon.
This can prove to be an example if they wanted to follow the same formula, she said, adding that merit will be the criterion for giving tickets.
The Congress leader who has been accused by political opponents of being a “political tourist”, asked her opponents to be more creative and find something new as they have been saying the same things for the past two years now.
When asked if this formula could be repeated in the party organisation, she said efforts will be made for it.
The Congress leader said she wanted to do a new kind of politics, fighting for those who are not able to raise their voice and bring a change and hope among them and also the scope that the state can move forward and is not just for misuse of power.
Congress national spokesperson Supriya Shrinate who accompanied Gandhi during the press conference said Uttar Pradesh and its politics is standing at an important junction.

By deciding to allocate 40 per cent of tickets to women candidates, the Congress party has decided to go in for the politics of pratigya (pledge) rather than that of ghoshna (announcements).