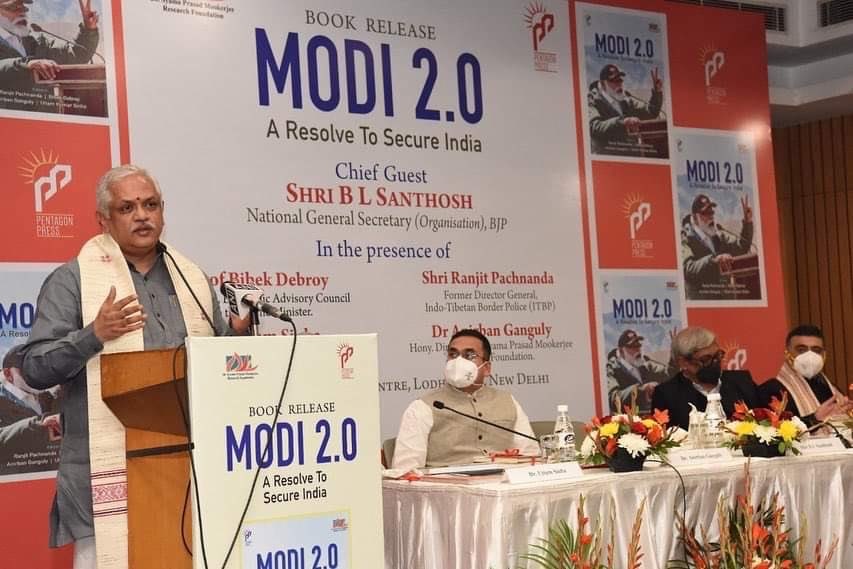 NEW DELHI: Prime Minister Narendra Modi has brought a sense of assurance about the future of the country, which was missing for the last 70 years, BJP general secretary (organisation) BL Santhosh said on Thursday.

Participated in the book release function of ‘ MODI 2.0 – A Resolve To Secure India ‘ by @spmrfoundation . The book is a collection of articles by experts edited by a team of scholars. pic.twitter.com/3PgbBARPtv

He also said the sense of assurance that the country’s common man has been experiencing for the last seven years of the Modi government can be likened to that in eras of King Vikramaditya, Lord Krishna and Lord Ram.

Santhosh, while was speaking at the launch of a book, ‘Modi 2.0’, discussed about the inclusion of socialism in the Constitution and said ”we failed the country, we failed the young entrepreneurs and young achievers, we failed society in the name of socialism for 40-45 years”.

The book was brought out under the aegis of the Syama Prasad Mookherjee Foundation, and published by the Pentagon Press.

”…If something has been brought in by Narendra Modi ji, we can say various technical things quoting some statistics…but he brought this sense of assurance which was missing for the last 70 years and many, many years before that,” Santhosh said.

He said now there is a sense of assurance because of a leader and a system. The system is in place because of the leader, Santhosh said.

To buttress his point he cited Manipur, the BJP leader claimed that the state has not seen ‘bandh’ for a single day in the last five years. Earlier, Manipur had a bandh which was for more than 700 days, Santhosh said.

He said that the true potential of the country was unmasked in the last seven years.

Santhosh said commitment to country, constitution and people is the guiding principle of the present government.

Without mentioning the Congress, the BJP leader claimed that the country witnessed many failures such as defeat in 1962 and Emergency of 1975.

He also discussed about inclusion of socialism in the Constitution and said this failed the country for more than four decades.

Referring to Congress leader Manish Tewari’s book which was also released at the same venue India International Center, Santhosh said a book is being released downstairs which talks about disaster and a book is being released here which talks about disaster management. He also said no matter which part of the globe Indians are, they are Indians. “We will create a situation where they all will be proud to say they are Indians,” the BJP leader said.

This government’s achievement is not policies, they were there already. The achievement is the change of mindset brought by this leader for nation first, Santhosh said.