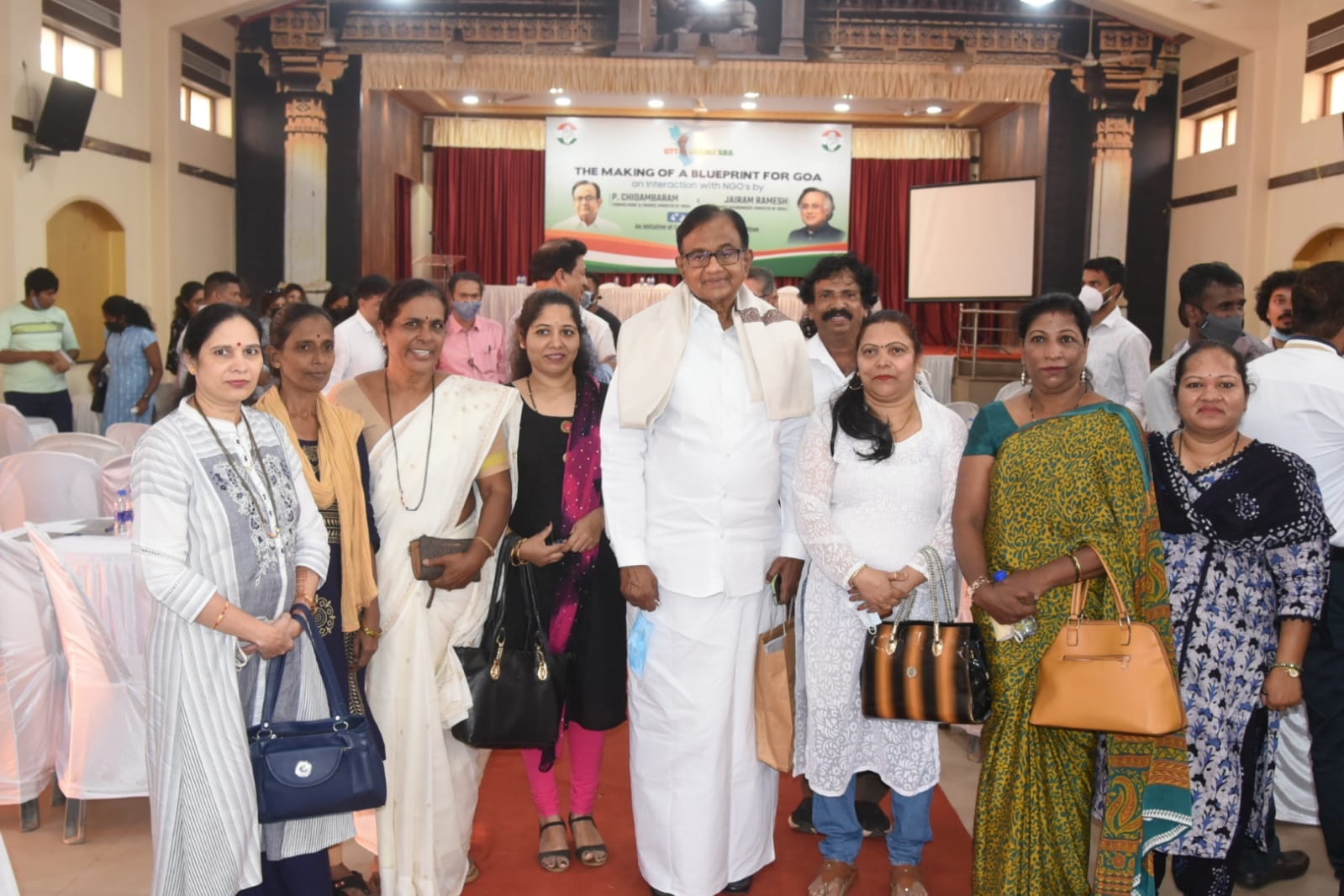 NEW DELHI: Asserting that the Congress and the BJP are the two main contestants in Goa, senior Congress leader P Chidambaram on Thursday said that if the AAP and TMC fielded candidates and secured some votes in the upcoming assembly polls, in effect they will be splitting the non-BJP vote.

Chidambaram, who is the Congress’ senior election observer for the Goa Assembly polls, also said that some days ago, the TMC hinted that it would like to form an alliance with the Congress and other parties and the AICC leadership was aware of the TMC’s desire and may have responded to it, but he has “no official word or instruction” from the AICC on the matter.

In an interview with PTI, Chidambaram said there is a strong and intense “anti-BJP, anti-incumbency wind” blowing in Goa, and his party would appeal to the electorate that “Goa should be ruled by Goans”.

Asked about the TMC’s strategy of taking in Congress leaders and then recently hinting at an alliance with all Opposition parties including the Congress, Chidambaram refused to directly comment on their strategy but said the Congress was “dismayed” when the TMC “lured” its MLAs to its fold.

“We received credible reports that the TMC was actively poaching our members including block-level leaders, sarpanches, etc.,” he said.

“In the early days, the TMC’s general secretary had declared that the TMC would contest in all the 40 seats and their aggressive approach seemed consistent with that objective.Some days ago, however, the TMC hinted that it would like to form an alliance with the Congress and other parties. I think the AICC leadership was aware of the TMC’s desire and the AICC leadership may have responded to TMC,” he said.

“I have no official word or instruction from the AICC on the subject matter,” Chidambaram added.

His remarks come days after TMC’s Goa in-charge Mahua Moitra’s tweet on Opposition unity set off speculation over a possible grand alliance including the Congress and the TMC in Goa.

However, the Congress has dismissed talk of alliance with the TMC with AICC general secretary (organisation) K C Venugopal tweeting on Monday, “The rumour in circulation that a possible alliance with TMC was discussed by Shri @RahulGandhi in today’s meeting is completely baseless & untrue.”

“Let me assure that the Congress party is confident- we will put Goa back on the path to progress soon,” he had said.

Asked if he believes that it would be a Congress versus BJP fight in Goa and the Aam Aadmi Party (AAP) and the Trinamool Congress (TMC) would remain on the fringes, Chidmabaram said every observer of Goa will agree that the two main contestants in Goa are the Congress and the BJP.

The Congress has deep roots in Goa, a state-wide cadre base and a long record of service to the people of the state, he said.

“The AAP contested all 40 seats in 2017 and drew a blank. the TMC is a new entrant. The two parties do not have a cadre base in the constituencies. They have attempted to build their parties through defections from the other parties, notably the Congress,” he said.

“We think that if the AAP and TMC fielded candidates and secured some votes, in effect they will be splitting the anti-BJP or non-BJP vote,” Chidambaram said.

On the Congress’ state of alliances in Goa, he said the talks are held at the state-level and the Goa PCC has reached an understanding with the Goa Forward Party.

“They are in talks with some other parties in Goa. I am not in a position to say what will be the outcome of these talks,” Chidambaram said.

He also expressed confidence that there would be no repeat of the Congress’ MLAs crossing over to the BJP as it happened during the current assembly term.

“What happened in 2017-2019 was shameful, and I have regretted it in my public utterances. Elected MLAs betrayed the party, the Congress workers and the electorate which elected them,” he said.

“This time we have asked the Block Committees to hold a meeting of the Block workers in each Block and propose names based on certain criteria, foremost among them being ‘loyalty’,” Chidambaram said.

The party’s Central Election Committee will choose a candidate from among the names proposed by the Block concerned, he said and added that “we are also devising other methods to ensure that 2017-2019 is not repeated”.

“We will disclose these measures at a suitable time. I am confident that no elected Congress MLA will defect this time,” he asserted.

Chidambaram asserted that there is a “strong and intense anti-BJP, anti-incumbency wind blowing in Goa”.

The Congress’ assessment is that about 65 per cent of the voters want a change of government, he said.

The BJP has ruled Goa for 10 years and has nothing worthwhile to show for its rule except all round deterioration, Chidambaram alleged.

“The Congress has presented a 21-point charge sheet against the BJP government. Our manifesto will contain our election plank and promises. The central themes of the Congress’ plank will be economy, employment, education, environment and the ethos of Goa,” he said.

“We will appeal to the electorate that ‘Goa should be ruled by Goans’ who will take our agenda forward,” Chidambaram said.

Asked about TMC leader Sushmita Dev’s remarks that there was a huge sense of “underconfidence” in the Congress for not being able to form the government after the last assembly polls, Chidambaram said if it was an observation, it is the observation of a new entrant to the TMC who may have only a “nodding acquaintance with the political situation in Goa”.

“What happened in 2017-2019 is well known. It is in the DNA of the BJP to encourage defections and steal elections,” he alleged.

Assembly polls for all 40 seats in Goa will be held on February 14.