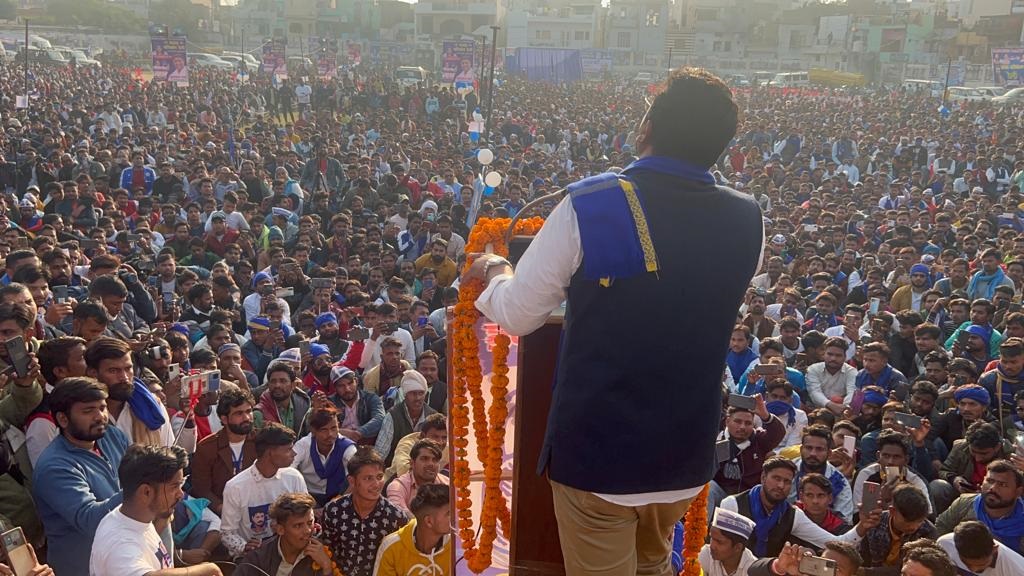 NEW DELHI: Undaunted by the prospect of taking on Yogi Adiyanath in his stronghold, Azad Samaj Party president Chandra Shekhar Aazad says the people of Gorakhpur will repeat the history of 1971 when a chief minister of Uttar Pradesh lost elections from the assembly constituency.

Confident that victory will be his, Aazad, whose party is heading the Samajik Parivartan Morcha of 36 small outfits, also pitched himself as a chief ministerial candidate from the alliance that is contesting 403 seats in the Uttar Pradesh assembly polls beginning next month.

“We need to go back to the history of Gorakhpur In 1971, a sitting chief minister, T N Singh, was defeated by the people of Gorakhpur. Similarly, Adityanath is the CM now and is responsible for the destruction of UP and Gorakhpur in the last five years,” Aazad, who is popularly called ‘Ravan’, told PTI.

After talks of an alliance with the Samajwadi Party failed, the Azad Samaj Party (ASP) decided to forge a coalition of small parties based on its not-so-good experiences with big and established parties.

“I wanted to forge an alliance (with SP) to stop the BJP so that there is no division between opposition. When they did not want to give us our share, we refused,” Aazad said.

He also rejected allegations of being a vote cutter and cleared the air about his fallout with the Akhilesh Yadav-led party.

“I am saying SP is also doing its job and so are we. I have no problem with the SP,” said the 36-year-old who has emerged as a prominent Dalit face.

On being dubbed a “vote cutter” party by some quarters, Aazad retorted, “Who stood up for the youth when lathis’ rained on them for seeking employment, when injustice was done against sisters . who raised real issues of the people?”

According to him, people in Uttar Pradesh saw the SP rule from 2012 to 2017 and the BJP from 2017 to 2022. After being disappointed with the SP government, people voted for BJP. So, the BJP came to power because of them (SP).”

People will not make the same mistake again, the ASP chief added.

Asked if he would be open to a post polls alliance, Aazad said his party would take a decision when the time comes. He asserted that he would head to Gorakhpur and present his agenda before the people.

He is confident of his chances in the incumbent chief minister’s pocket borough. When people can make Prime Minister Narendra Modi an MP despite not being from the state, I at least belong to Uttar Pradesh.

“I will defeat him (Adityanath), we need organisational strength for it and we have that. Their failures are plenty inflation, Covid handling, unemployment recruitment scams, law and order and women’s security, this government has failed on all counts,” Aazad said.

There was talk of Adityanath fighting from Ayodhya but this was later “changed” to Gorakhpur Urban. He knew Chandra Shekhar Aazad will contest against him so he returned to a so-called “safe seat”, the ASP chief said.

If Adityanath had done good work why would he return to Gorakhpur?

Congress-O leader Tribhuvan Narain Singh was from Varanasi and took oath as chief minister in October 1970 without being a member of state legislatures. He contested a bypoll from the seat of Maniram in Gorakhpur in 1971 but lost the contest and was forced to resign.

Asked about contesting from a seat in eastern Uttar Pradesh when his influence is considered to be more in the western part of the state, Aazad said this is a “media creation” and his party has influence all over.

Born in Uttar Pradesh’s Saharanpur district, Aazad launched the Bhim Army in 2014 to fight for the welfare of the Dalits. He later formed the Azad Samaj Party, a political front of the Bhim Army.

The party contested elections for the first time in the bypoll to the Bulandshahr Sadar seat in 2020. Its nominee Mohammed Yameen lost but secured 13,000 votes.

Polling for the 403-member Uttar Pradesh Assembly is scheduled to be held in seven phases from February 10 to Mar and the counting of votes will be taken up on March 10.