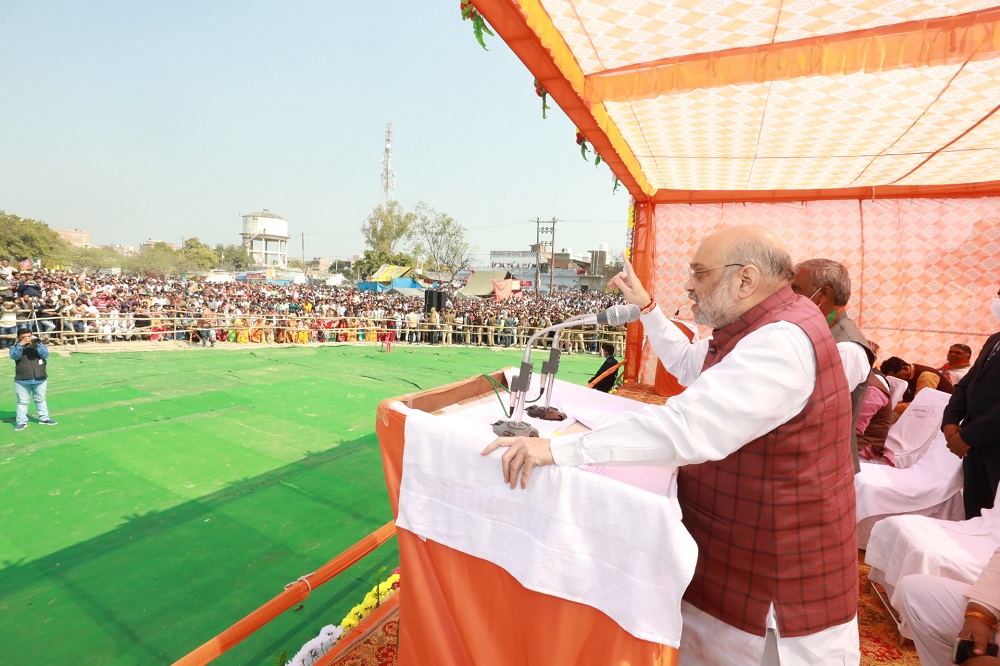 AURAIYA: Union Home Minister Amit Shah on Tuesday accused the Samajwadi Party and the BSP of crumbling the economy of Uttar Pradesh and credited Chief Minister Yogi Adityanath with bringing a turnaround in five years in the state.

He also said the 2022 elections are for “strengthening Prime Minister Narendra Modi’s hands and for making Yogi chief minister again”.

“SP and BSP’s ‘babua and bua” both had crumbled the economy of such a big state as Uttar Pradesh, the economic system was on the seventh spot in the country which was brought to second spot by Yogiji in five years. Give another chance of five years and it will be taken to the first spot,” Shah told an election meeting here.

Claiming success on the law and order front under the Yogi Adityanath government, he asked, “Can any mafia trouble you anywhere, can anyone encroach your land, play with the honour of mothers and sisters? Yogi ji has ensured the migration of mafia from Uttar Pradesh.”

“Akhilesh Yadav had asked what has happened (during the five years of BJP government), the one who has put yellow spectacles will see everything as pale,” he said taking a swipe at the SP chief.

Continuing his attack, he said, “During the Akhilesh government, only ‘kattas’ and sharpnels were made in Uttar Pradesh but now during the BJP government ‘goley’ (ammunition) are being made here which will be fired at Pakistan. This change has come in five years by the BJP government.”

Praising Modi, he said that he has ensured the safety of the country.

“When the SP-BSP supported the Sonia Gandhi and Manmohan Singh government, there was intrusion from Pakistan and our soldiers were beheaded but there was no reaction from our ‘Mauni Baba’, but Modi avenged such misadventures after coming to power, sending a strong message to the world, he asserted.

Exhorting the youths, whom he had earlier addressed as “jigar ke tukde jaiey yuva”, he asked whether Kashmir is a part of India and Article 370 should have been abolished or not.

“Modi was made prime minister and a bill came in Parliament, all these SP-BSP and Congress collectively opposed it. Akhilesh had said it would lead to bloodbath but no one dared to do anything and it was removed,” Shah said.

Speaking in Auraiya which will go to polls in the third phase of voting slated for February 20, he claimed that the SP and the BSP have been wiped out in the first two phases of polling and the BJP is fast approaching the mark of 300 seats in Uttar Pradesh.

“The BJP is all set to form its government with a massive majority,” he asserted.

Claiming that the BJP is the only party which works for the poor, Shah said “When Modiji brought the Covid vaccine, Akhilesh termed it as Modi vaccine and asked people not to take it. But after tweeting against it for sometime he himself took it out of fear. If Modi had not given vaccines to the 130 crore people, then would we have been as safe during the third wave.”

Elaborating on the BJP’s schemes, he said, “Bua-bhatija ran their governments for 15 years but did any house get gas cylinders? Whereas 1.66 lakh mothers have got cylinders and stoves and we have decided to provide one free cylinder on Holi and Diwal,” he said.

“It’s Holi on March 20 and counting is on March 10. Allow BJP to form the government and one gas cylinder will reach you (on Holi),” he added.