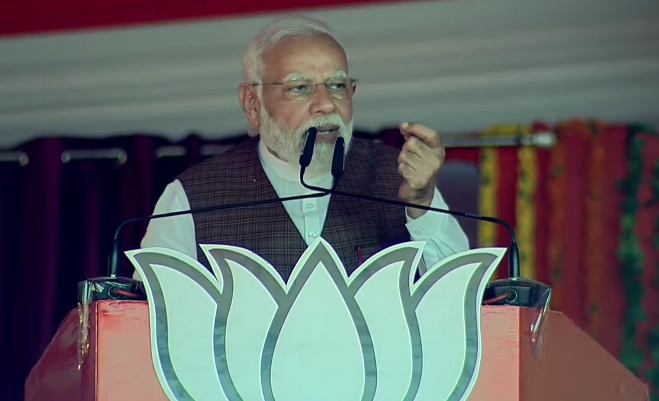 NEW DELHI: Prime Minister Narendra Modi on Thursday called the opposition parties “selfish” for opposing triple talaq, saying they don’t think for the good of even those who vote for them.

“When the government made a law against triple talaq, then the whole ‘kunba’ (opposition) stood against it,” the PM said addressing an election rally in UP’s Fatehpur.

“I am surprised in which century they are living. They cannot think for the good of even those who are voting for them,” the PM said, asking people if the opposition parties can be trusted.

“There used to be triple talaq even on small issues. Think about the father of a daughter who returns with one or two kids. What would they have to face. What a brother and mother faced when his sister or daughter returned from her in-laws’ place,” he said.

“But I am getting blessings of Muslim sisters and daughters all over the country as I have done a great job of saving their lives,” the PM said referring to the triple talaq law, which was enacted by the Centre in 2019.

Hitting out at the rival parties over dynasty politics, Modi said the dynasts of UP had termed the covid vaccine as the BJP’s vaccine and they always question the country’s achievements.

In an apparent jibe at the Samajwadi Party, Modi said, “The BJP government is giving free vaccine to the entire country but these “parivarwadi” (dynasts) are saying this is BJP’s vaccine.”

“These ‘parivarwadis’ of UP never liked the might of the country and they question whatever good the country does,” the PM alleged.

Modi said only two entities are afraid of the vaccine–coronavirus and the ones who oppose it.

The PM also predicted the BJP win in the Uttar Pradesh Assembly polls, saying people have made up their mind to celebrate Holi on March 10, referring to the day of counting.

The PM claimed that the support for the BJP is on the rise in the state.

“Your enthusiasm shows a glimpse of the next five phases,” he told people at the rally referring to the remaining rounds of the UP polls.

People have decided to celebrate Holi on March 10 itself, he added.