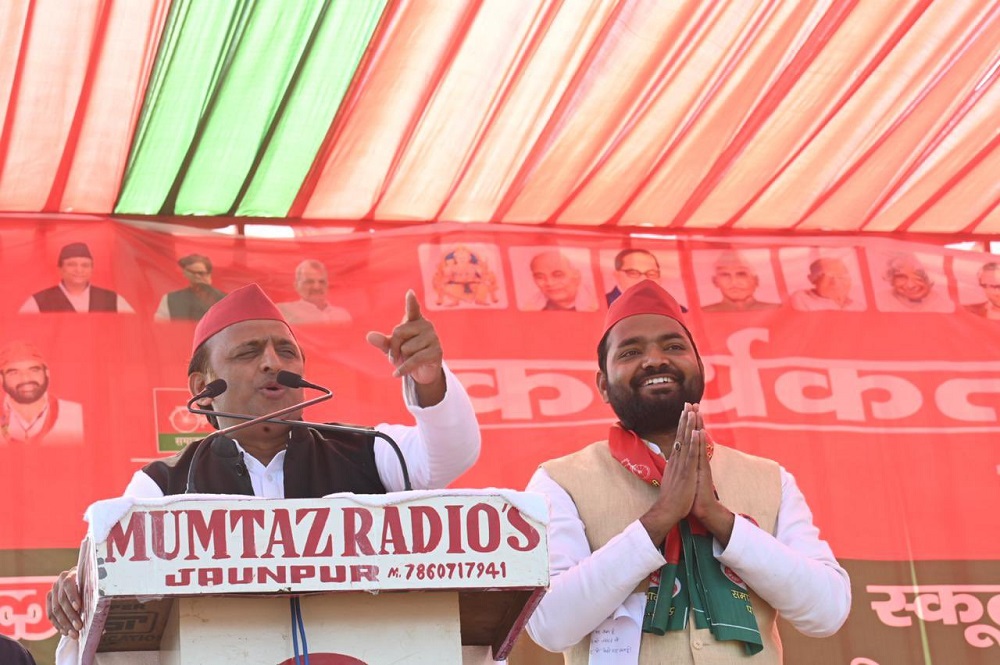 NEW DELHI: Samajwadi Party (SP) president Akhilesh Yadav on Friday said the Uttar Pradesh assembly polls are not just to elect the government of the state but also to save the Constitution and democracy of India.

Addressing a rally in Mau for candidates of the Samajwadi Party (SP) and alliance partner Suheldev Bhartiya Samaj Party (SBSP), Yadav said the ongoing state polls are the biggest elections yet in the country.

Yadav also said the BJP’s frustration of losing the polls is visible in their actions and language, and cited the example of attack on SP leader Swamy Prasad Maurya and insult to SBSP chief Om Prakash Rajbhar.

Has not the language and behaviour of the people, who have become worried now, changed? You can see defeat on their faces now. They are not just frustrated but have started insulting SP leaders because they have realised the people are not with the BJP now, he claimed.

Yadav claimed the spirit of the people of Mau indicates that no rival party candidates will win on any assembly seats in the region.

The votes for the sixth phase have been caste, the seventh phase voting is coming up and I have come here to seek your support. I am hopeful you will ensure victory of SP, and alliance SBSP candidates from whichever seat they are contesting on, he said.

This election is going to be the country’s biggest election. It’s not only to elect the government in UP but also to save the Constitution of India, democracy of India. The people of BJP have lied to public and this election is to remove such liars from Uttar Pradesh, Yadav said.

The former UP chief minister also accused the BJP and its leaders of spreading lies as he shared the stage with alliance candidates, including jailed don-turned-politician Mukhtar Ansari’s son Abbas Ansari.

The people of BJP are amazing.They touch the water of mother Ganga, take a holy dip in it yet continue to speak lies. The BJP claims to be the biggest political party in the world but no other party in the world speaks as much lie as the BJP does, its people do, Yadav said.

Claiming that the BJP has made no provision for free ration to the poor from March, he said if the SP forms government in the state free ration would be provided to the poor for full five years.

Besides the ration, we will also provide one litre mustard oil, one kg milk power, one kg ghee to the poor and sugar, Yadav said.

He said the farmers’ income has not doubled as promised, they are not getting fertilisers and urea, inflation has hit the people and prices of petrol and diesel have also hit the sky.

The inflation has increased so much that even the size of Parle-G biscuit has shrunk, Yadav said.

He claimed that if the BJP returns to power, petrol and diesel will cost Rs 200 per litre.

He said if the SP forms the government in UP, 300 units of electricity would be made free to everyone and farmers will not have to pay bills for power used for irrigation.

He also announced welfare measures for the weaver community in the region in order to revive their work and said if his party forms government, it will provide them with 24-hour electricity at flat rate.

If needed, we will make allocations in state budget to hold exhibitions and marketing programmes for the weavers. ‘Bunkar Bazaars’ for weavers would be set up along the Purvanchal Expressway, he said.

Additionally, markets would be set up along the Purvanchal Expressway to ensure produce of farmers are procured at MSP, he added.

He said Chief Minister Yogi Adityanath was talking about cooling down us but the coming together of cycle and walking stick (poll symbols of SP, SBSP) have now cooled him down instead .

He hit out at the BJP over the issue of unemployment in the state and said if the SP comes to power then recruitments on the 11 lakh vacant government posts will be done expeditiously.

Mau goes to polls during the seventh and last phase of Uttar Pradesh polls on March 7. The election results will be declared on March 10.