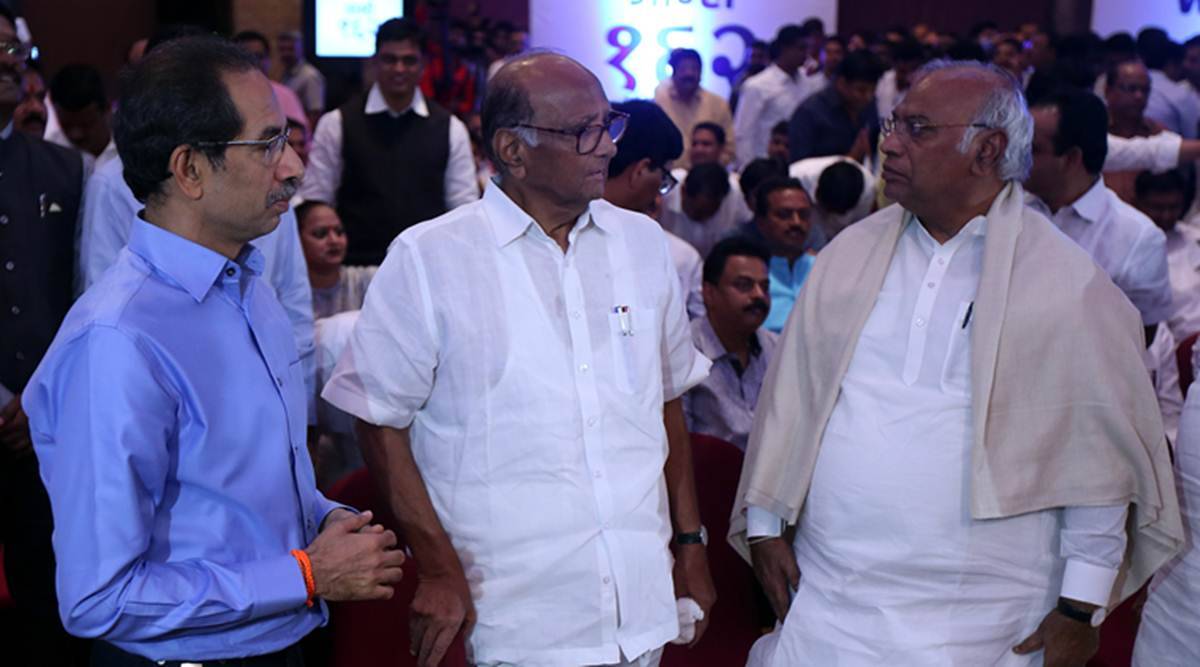 MUMBAI: In a show of solidarity ahead of June 10 election for six Rajya Sabha vacancies from Maharashtra, Chief Minister and Shiv Sena president Uddhav Thackeray, NCP supremo Sharad Pawar and Congress leader Mallikarjun Kharge held a meeting with MLAs of the three parties here on Tuesday.

As leaders of the ruling Maha Vikas Aghadi (MVA) coalition of the Sena, NCP and Congress held parleys with Independent MLAs and smaller parties to cobble up support, the Sena also decided to shift its legislators to a city hotel to thwart attempts of poaching.

The chief minister said during the meeting that our victory is certain and asked the legislators of the three parties to stay united, Sena MLA and spokesperson Sunil Prabhu told PTI in the evening.

This was the first such meeting of the MVA MLAs and its leaders after the formation of the Uddhav Thackeray-led government in 2019.

In the 288-member Maharashtra Assembly (which forms the electorate for the Rajya Sabha polls), smaller parties have 16 MLAs, while the number of Independents is 13.

With one Assembly seat lying vacant and two NCP MLAs (Anil Deshmukh and Nawab Malik) in jail, the quota of votes per winning candidate is 41.

A total of seven candidates — three candidates of the BJP, two of the Shiv Sena and one each of NCP and Congress — are in the fray for six seats, which necessitated election for Rajya Sabha after more than two decades in Maharashtra.

The contest for the sixth seat will be between the BJP’s Dhananjay Mahadik and Sena’s Sanjay Pawar.

The BJP has asked its MLAs to come to Mumbai in the next two days.

AIMIM president Asaduddin Owaisi said the MVA should contact his party if they need support while the Samajwadi Party has sought Chief Minister Uddhav Thackeray’s clarification on the Shiv Sena’s language of Hindutva and the government’s secular credentials.

All 55 legislators of the Sena have been summoned to Mumbai and they will stay together till the polls on June 10, a Sena leader said.

“We were at ‘The Retreat’ (at Madh island in northwest Mumbai) and all our ministers too were present there. That was part of our strategy. We will be moving to hotel Trident (in south Mumbai) today,” Sunil Prabhu had said earlier in the day.

The Trident is a stone’s throw from the Maharashtra Legislative Assembly where voting will take place.

Senior Shiv Sena leader and minister Anil Parab said talks are being held with all parties, be it the AIMIM and Samajwadi Party, who have extended their support to the MVA government.

The AIMIM and the SP each have two MLAs in the House.

Shaikh told reporters that the SP has written a letter to CM Thackeray, asking him to clarify the government’s secular credentials.

“The Common Minimum Programme on which the government was formed and the language of Hindutva spoken by the chief minister in his speech…there is so much difference (between CMP and the Hindutva language). So (the CM should) clarify whether the government is secular or if Sena’s Hindutva credible or the BJP’s,” Shaikh said.

What has the government done in the last 2.5 years? The minority commission and the Haj Committee have not been formed until now, Shaikh said.

When asked whether the Samajwadi Party is with the MVA, Shaikh said, “We are with the MVA, but look at the demands. It is ideological.”

Given its strength in the Assembly (106 MLAs), the BJP has enough votes to win two seats, while the Sena, NCP and Congress can win one seat each.

The Sena (55), NCP (53) and Congress (44) — all constituents of the MVA-have enough votes together to ensure the victory for the second candidate of the Sena.