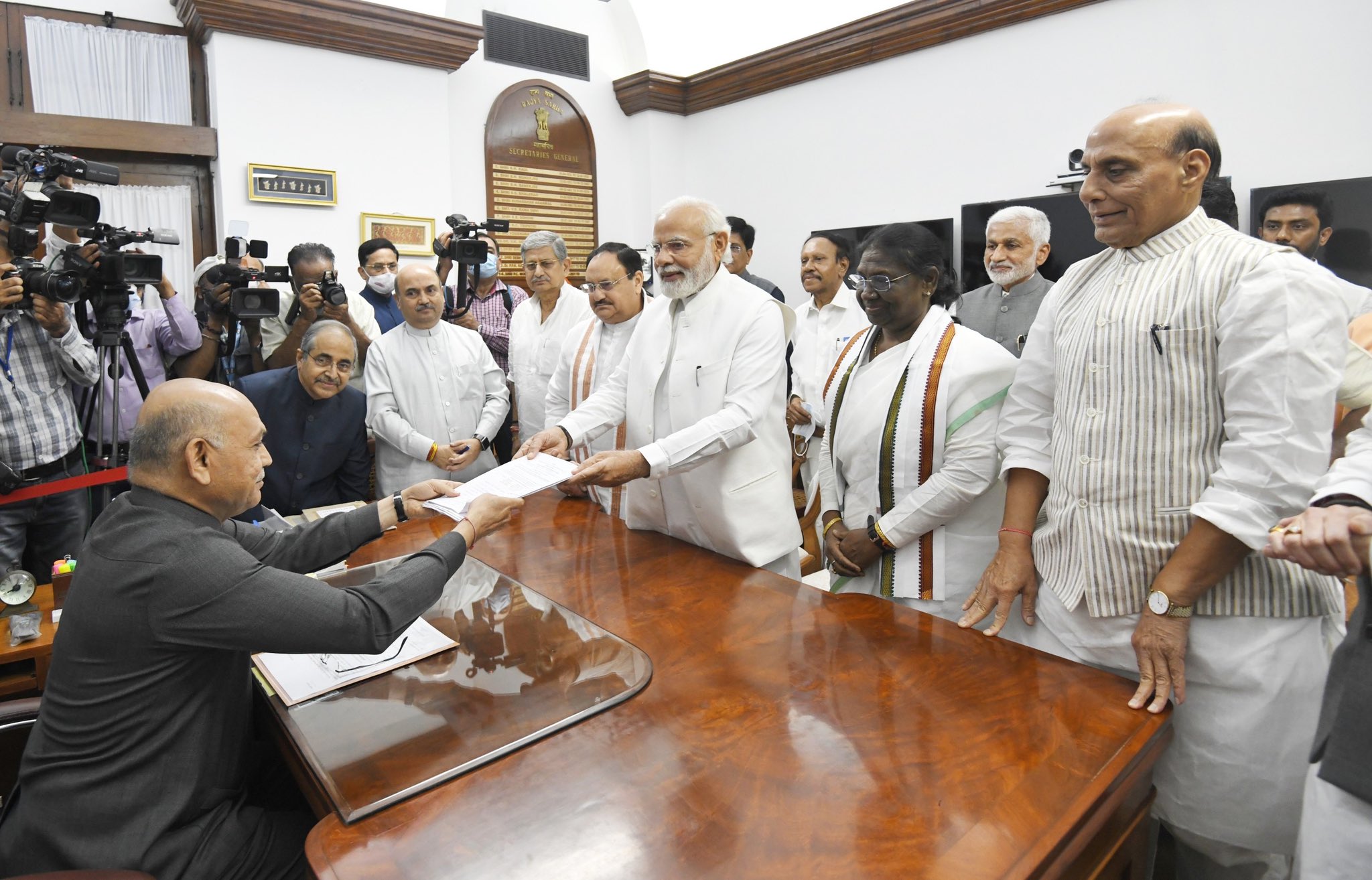 Besides the NDA leaders, YSR Congress’ V Vijaysai Reddy and BJD leader Sasmit Patra, who are not part of the alliance, were also in Parliament to back her nomination.

Every set of nomination has to have 50 proposers and 50 seconders among elected representatives.

Murmu, if elected, will be the first tribal president and the second woman in the post. She will also be the youngest president ever, second only to N Sanjeeva Reddy, who was a few days elder to her when he became the President.

With the BJP-led NDA nominating as its presidential election candidate Droupadi Murmu, hailing from the Santhal community, the third-largest ethnic tribal group in India, the focus is now on the tribals who constitute 8.67 per cent of the country’s population.

If Murmu who hails from Odisha is elected, political parties cannot ignore the tribal people when a member of the community is the President, while the BJP will get the dividend in the Assembly elections in states having a good percentage of tribal population, particularly Santhals, observers feel.

Her selection can also be seen as part of the BJP’s game plan for the Lok Sabha elections and the Assembly poll in Odisha, where tribals constitute over 22 per cent of the total population, in 2024, they said.

Born in the Santhal community, Murmu was a councillor in Odisha’s Rairangpur Nagar Panchayat in 1997. She rose through the ranks and became a minister in the BJD-BJP alliance government in 2000 and later the governor of Jharkhand in 2015 when the saffron party was in power in that state.

In 2017, she had returned bills proposing an amendment to the Santhal Pragana Tenancy Act, 1976, which sought to give rights to tribals to make commercial use of their lands while ensuring that the land ownership is not changed.

The Act prohibits sale of tribal land to non-tribals in the region along Jharkhand’s border with West Bengal.

It proves that Murmu can work as per the Constitution withstanding pressure even from the BJP. Generally, women leaders in the BJP get positions and are empowered. I think Murmu will also get the freedom to work,” Smita Nayak, professor of Political Science at Utkal University, told PTI.

Nayak said that no political party can directly oppose a woman and a tribal.

“(If she is elected as the President), no political party can ignore the tribals when a member of the community is heading the topmost post of the country, Nayak said.

Since Murmu hails from Odisha and she was a governor in Jharkhand, the impact is obvious in both the states where the saffron party has been trying to get more influence.

Of Odisha’s 147 Assembly constituencies and 21 Lok Sabha seats, tribals represent 33 and five respectively. Of those five Lok Sabha seats, two each are held by the BJD and the BJP while the Congress has won the Koraput seat.

While Chief Minister and BJD supremo Naveen Patnaik urged all members of the state Assembly to extend unanimous support to Murmu as is the “daughter of Odisha”, state BJP president Samir Mohanty claimed that Prime Minister Narendra Modi has promoted many Odias at the national level and nomination of Murmu is the biggest gift to the state.

Congress MLA Mohammad Moquim claimed that the BJD and the BJP are now in a race to take credit for Murmu’s nomination.

“Naveen Babu is afraid that the BJP may eat into his party’s woman and tribal vote banks,” he said.

Senior BJP leader Manmohan Samal asserted that though Patnaik is trying to project that the PM had informed him about the NDA nominee’s name before the announcement, it is not true.

Modi and BJP chief JP Nadda have highlighted tribal icons such as Bhagwan Birsa Munda during their programmes in various states.

The BJP’s target is the 2024 Lok Sabha elections and Murmu’s selection can be seen as a part of the party’s strategy for that, said senior journalist BK Mishra.

You can see how the parties are on their own coming forward to support Murmu because of her tribal and woman identities. The BJD has gone overdrive to campaign for her on the pretext of her being a daughter of the soil, a political science professor, who does not want to be quoted, said.

The Ravenshaw University teacher said that Murmu’s elevation will have impact on Odisha, Jharkhand and several other states.

Senior Congress leader Ganeswar Behera, who belongs to the SC community, however, claimed that making a tribal the country’s President will not have much impact on electoral politics.