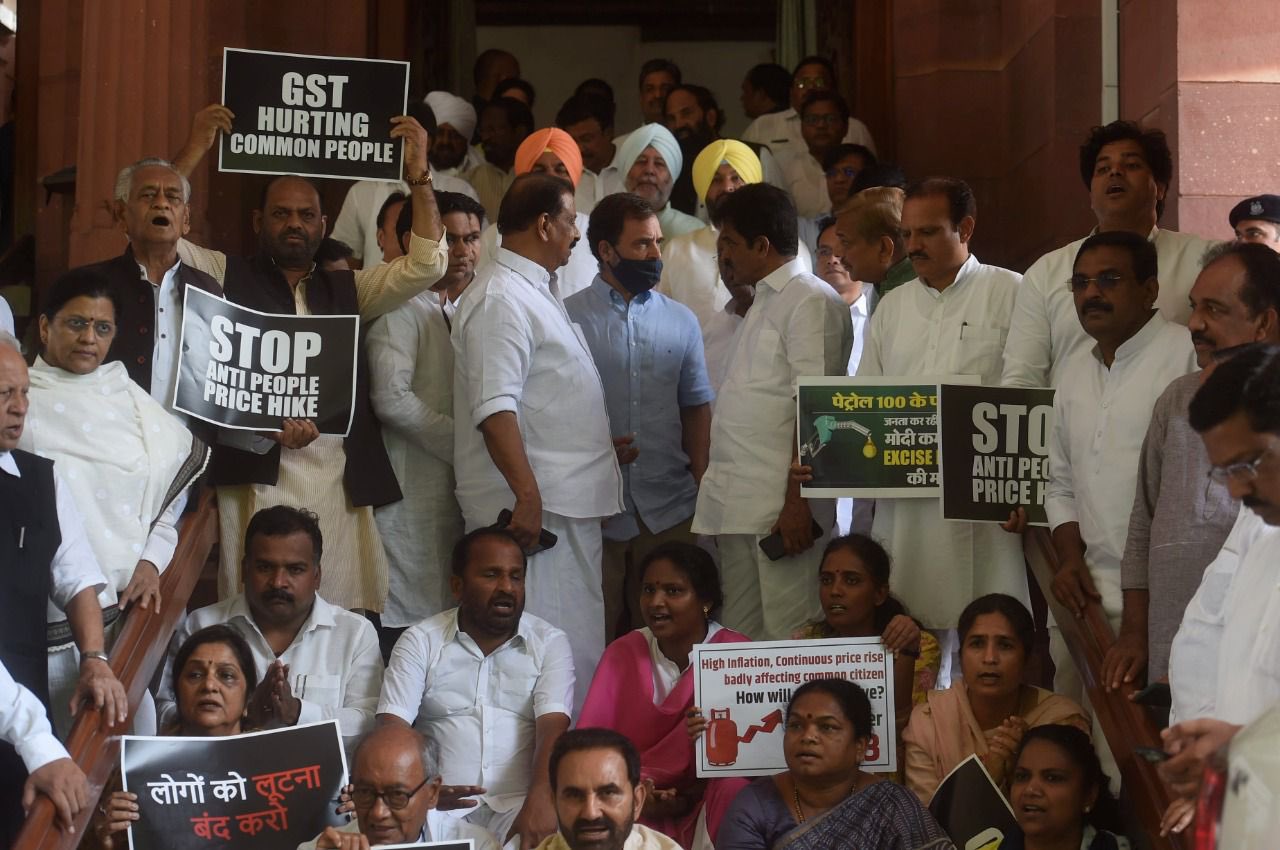 NEW DELHI: The Opposition in Lok Sabha on Wednesday demanded the revocation of the suspension of the four Congress MPs, but the government insisted that it can be withdrawn provided the opposition members give assurance that they will not enter the Well or display placards in the House.

The demand was made by the Nationalist Congress Party (NCP), the Trinamool Congress (TMC) and the Dravida Munnetra Kazhagam (DMK). The Congress members were not present in the House. Several Congress MPs have been detained after staging a protest at Vijay Chowk against the alleged ”misuse” of probe agencies.

Responding to the appeals by the opposition members, Parliamentary Affairs Minister Pralhad Joshi said,”with the speaker’s permission, we are ready to withdraw, but are you ready to take guarantee that they will not come inside with placards and will not come into the Well”.

As the House met at 2 PM after it was disrupted twice in the morning, NCP leader Supriya Sule said the Opposition is willing to cooperate with the government for the smooth functioning of the House.

”Yesterday and we request today also, that four of our members should be forgiven and brought back to the House. We want a debate, we want to cooperate with the government. Allow our members to come back and we will not go into the Well of the House,” Sule said after the chair, Rama Devi, allowed her to speak on the impasse in the House.

”I am saying it on the behalf of the Opposition that we want to run the House,” Sule added.

Echoing her views, TMC’s Sudip Bandyopadhyay also said the suspension of the four members be revoked if it is a feeling of the House.

”(Pralhad) Joshi ji has announced that the government is prepared to have a discussion on price rise, we are also prepared to take part in the debate. Let this issue be sorted out and let the debate start,” he said.

DMK’s A Raja said,”What happened yesterday is not healthy for democracy. I have been on both sides in the House. Coming to the Well, democratically protesting with placards is not unknown to this House.” ”With folded hands, I say don’t value numerical strength in this House. Healthy debate will not stand before numerical strength. Please reconsider, withdraw the decision and thereafter we are willing to participate in the debates. On behalf of the DMK, I say that the suspension be withdrawn immediately,” he said.

Joshi asserted that from the time of the all-party meeting till this morning, the government has said categorically that it is ready for the debate demanded by the Opposition.

”I also requested that if you want the debate today we are ready for it. Despite this the whole of last week was wasted by them (Opposition) and it is happening again. ”If they want we are ready to take it (suspension) back, but will they take a guarantee that they will not come into the well, will not come into the Well with placards and will not place the placards before the face of the speaker,” he said.

Are the Opposition members ready to take the guarantee on behalf of their parties and the Congress, he asked.

He also recalled an incident when the BJP was in the Opposition and he had come into the Well and the then leader of House, Pranab Mukherjee, had opposed it and L K Advani had stopped him from going there. ”They (opposition members) come here to stand before the Prime Minister and not only that, they try to show placards in the face of the Speaker,” Joshi said.

Four Congress Lok Sabha members were suspended on Monday for the rest of the Monsoon session after Speaker Om Birla took a stern view of the continuous disruptions by them, evoking a sharp reaction from the party, which termed the action against its MPs a ”blot on democracy”.

The suspension of Congress MPs –Manickam Tagore, TN Prathapan, Ramya Haridas and Jothimani– under Rule 374 for obstructing the functioning of the House, came amidst continuous demand of the Opposition for a discussion on price rise and hike in GST rates.

Defending the action against these MPs from Lok Sabha, Joshi, who had moved the motion to suspend them, on Monday said the government is ready for discussion on price rise, but the MPs did not respect the chair and created a ruckus by violating the laws.