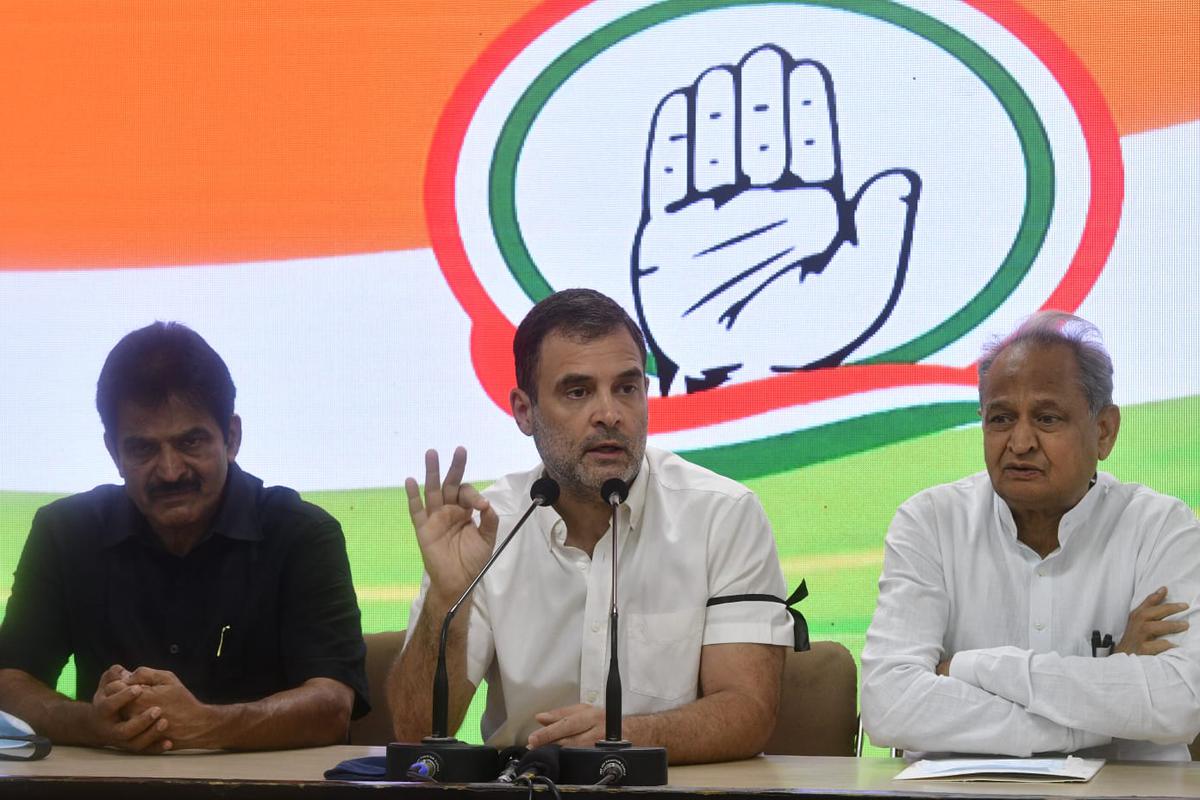 NEW DELHI: Congress leader Rahul Gandhi on Friday alleged that India is witnessing the “death of democracy” and anybody who raises people’s issues and stands against the onset of dictatorship is “viciously attacked” and put in jail.

Addressing a press conference at the AICC headquarters here ahead of the nationwide protest by the Congress against price rise and GST hike on essential items, the former Congress president said the Gandhi family is attacked because it fights for democracy and for communal harmony.

Gandhi charged that the sole agenda of the government is that people’s issues such as price rise, unemployment and violence in society must not be raised.

“There is no democracy in India and there is a dictatorship of four people, he alleged.

“What we are witnessing is the death of democracy. That is what India is witnessing. What India has built brick by brick, starting almost a century ago, is basically being destroyed in front of your eyes,” Gandhi, who was flanked by party leaders Ashok Gehlot and Jairam Ramesh, said.

“Democracy is now a memory in India and nothing more. There are going to be consequences of this because people of India will not be quiet about that,” he also said.

“All of you know it, all of India knows it. Anybody who stands against this idea of the onset of dictatorship, does not matter who he is, where he comes from, which state, which religion, male or female, that person is viciously attacked, put in jail, arrested, beaten up,” he said.

The idea is that people’s issues, whether they are price rise, unemployment, violence in society, must not be raised, Gandhi said, alleging that the more he raises people’s issues and speaks the truth, the more he will be attacked.

“My problem is that I speak the truth and I do not fear anything. I will raise issues of price rise, and I will be attacked more. But, the one who threatens himself fears,” he claimed, alleging that they fear price rise, unemployment and the power of people.

Noting that he will continue to raise people’s issues, he said, “I get great joy when political people attack me. I get happiness.”

He alleged that the government is being run to protect the interests of four-five people and this “dictatorship” is being run in the interest of “two-three big business people by two people”.

The Congress leader further alleged that no institution in the country is independent and the entire infrastructure of the government is with one party. The opposition that fights in a democracy, does so with the strength of the institutions, he said, alleging that all these institutions are supporting the government because it has control over them.

“No institution is independent and they are in control of the RSS, which has installed its people there. We are fighting against the entire infrastructure,” he said, alleging institutions throw their weight against any person speaking against the government.

“There is financial monopoly and institutional monopoly, that is why the opposition is not effective,” he said.

On BJP’s claim that they have been winning elections, he said, “Hitler also used to win elections. He had the entire institutional structure with him. Give me the power on the institutions and I will show you how elections are won.”

Asked about the questioning by the Enforcement Directorate of Congress president Sonia Gandhi and him in the National Herald case, he said, “Question all you want, there is absolutely nothing there, everybody knows it”.

“My job is to resist the idea of the RSS and the more I do it, the more I will be attacked. I am happy, attack me,” he said.

Gandhi asserted that the government can “continue scaring” them, it will not make any difference.

To another question, he said, “They attack the Gandhi family because we fight for an ideology and there are crores of people like us. We fight for democracy, for communal harmony and have been fighting for years. Only I did not do this. This has been done for years, my family members have sacrificed their lives,” he said, adding this is “our responsibility”.

“When India is divided and Hindus-Muslims are made to fight then we feel pained, when someone is assaulted for being Dalit, we are pained, when a woman is beaten up, we are pained that is why we fight. This is not a family, this is an ideology,” he asserted.

Gandhi also attacked Finance Minister Nirmala Sitharaman, saying she does not understand anything.

“I don’t think the finance minister has any understanding of what is going on. She is just a mouthpiece. If she had, we would not be in this situation,” he said.

He asserted that what the FM is saying is “just complete nonsense” as she probably does not know that India is facing the highest unemployment.

“This is not the reality, what she is saying. The reality is different and perception is created,” he said, adding they talk of StartUp India, but it is throwing people out.

He also said the government is claiming no one died in India during Covid, but international agencies say over five lakh people died.

Rajasthan Chief Minister Gehlot said all opposition parties would have to come together against this “onslaught” of the government against democracy and claimed that these were difficult times.

Ramesh alleged that their leader has answered all questions, unlike the prime minister who has never faced the media or held a press conference. “He is not a ‘Teleprompter-jeevi’,” Ramesh said, in an apparent attack at the prime minister.

The Congress is holding nationwide protests against price rise, unemployment and GST hike on some essential items.

Dressed in black, Congress MPs led by Sonia Gandhi and Rahul Gandhi staged a protest in Parliament House complex as they marched towards Rashtrapati Bhawan as part of their nationwide protest.