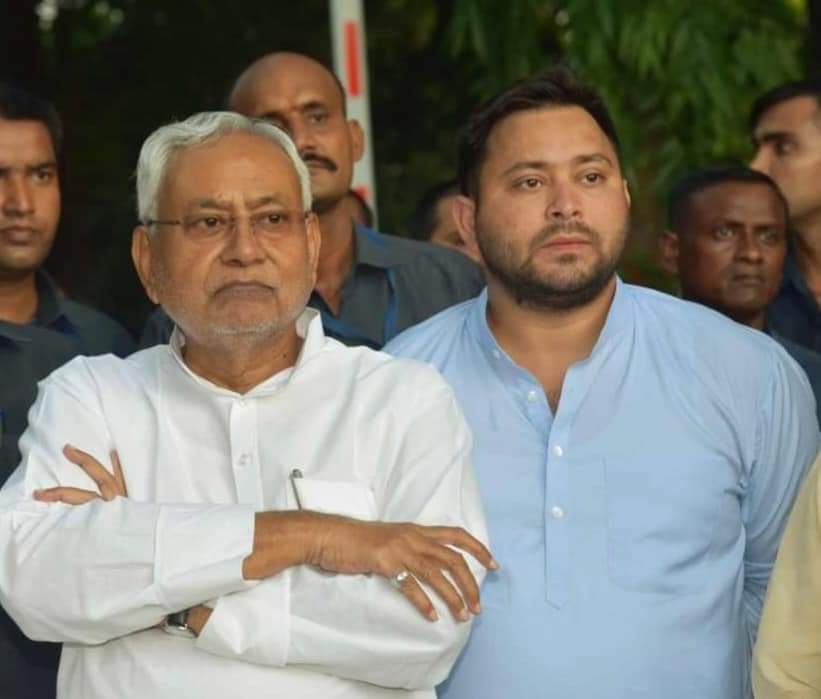 NEW DELHI: JD(U) leader Nitish Kumar on Wednesday took oath as Bihar chief minister for a record eighth time in a no-frills ceremony at Raj Bhavan, a day after snapping ties with the BJP-led NDA and joining hands with the RJD to form a ‘Mahagathbandhan’ government.

Kumar was sworn in besides RJD’s Tejashwi Yadav, who is likely to be designated as his deputy. A notification is likely to be issued tonight, naming him as the deputy chief minister.

Other cabinet ministers will be sworn in later once the three main alliance partners — the JD(U), RJD and Congress — decide on the number of berths and the legislators who will be made ministers.

Kumar is likely to retain the all-important Home portfolio, while the RJD may get most of the departments that were previously with the BJP, a highly-placed source said.

He said an in-principle agreement has been reached about the composition of the new cabinet, which is likely to have “35 members or more”, drawn from Kumar’s JD(U), the RJD and the Congress.

Euphoric scenes were witnessed outside the Raj Bhavan and residences of Kumar and Yadav, as hundreds of supporters of JD(U) and RJD celebrated beating drums, bursting crackers and distributing ‘laddus’ (sweetmeats).

Talking to reporters shortly after he was administered the oath of office by Governor Phagu Chauhan, Kumar rubbished BJP’s claim that the new government will not last its full term, and said his former ally “will be back where they were after the 2015 assembly polls” when the NDA could get less than 50 seats in the 243-strong assembly.

Meanwhile, leaders of the BJP, which is the second largest party in the assembly with 77 MLAs, were conspicuous by their absence at the swearing-in ceremony.

“We have received no invitation. We would have, in any case, not liked to witness formation of a government which has been installed after betraying the people of Bihar, who voted for the NDA in the last assembly polls, and is an insult to Prime Minister Narendra Modi who stuck to his promise of backing Kumar for another term, despite the JD(U)’s poor performance,” BJP leader Sushil Modi told a press conference.

“Nitish Kumar has been in a habit of ditching allies. He will not be loyal to the RJD as well, and try to break that party taking advantage of Lalu Prasad’s ill-health… We are accused of betraying our allies by the JD(U) which cites the example of Shiv Sena. Shiv Sena came apart. And we were not its allies then,” he said.

Back in the reckoning as a potential “secular” alternative to Narendra Modi, which the disjointed opposition could project, Kumar said he had no “daawedari” (claims) when asked about prime ministerial ambitions, but quipped “they should remember 2014 is past. They need to worry (‘chinta karni chahiye’) about 2024”.

Sushil Modi also claimed that Tejashwi Yadav as the leader of the numerically bigger party “will try to act as the de facto CM”.

“He will also be under pressure to deliver on the promise of 10 lakh government jobs he had been making to the people of the state. This will unsettle Nitish and the internal contradictions will cause the government to collapse before 2025,” the former deputy CM said.

Kumar, however, asserted that the new government will run fine and fulfil all the promises made to the people of Bihar.

“They (the BJP) are worried that they may be back to the same level they were at in 2015,” the chief minister said, referring to the assembly polls JD(U), RJD and Congress had fought together in which the BJP-led NDA was trounced.

Later, the Rajya Sabha member also claimed that Kumar wanted to “become the vice president” and he dumped the BJP after the party failed to accommodate his ambitions.