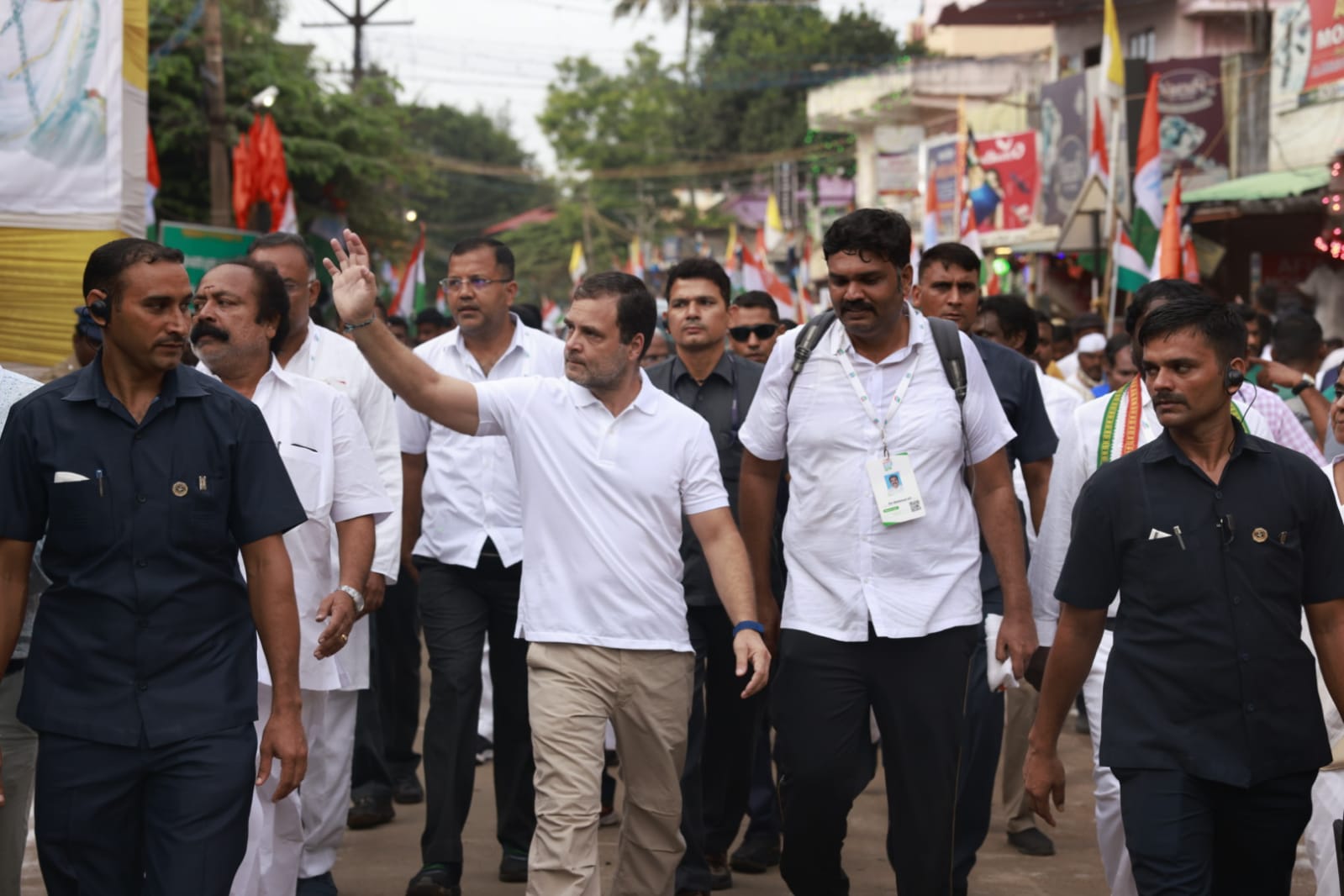 NEW DELHI: Sixty truck-mounted containers with colour-coded occupant capacity, a 10-seater conference facility, mobile toilets and a dining area are some of the features of a “Bharat Jodo Yatra” campsite that moves daily to a new location.

Rahul Gandhi is staying in a one-bed container that has a small sofa, an air conditioner, a small refrigerator and an attached toilet.

A pictorial representation of one of Mahatma Gandhi’s marches with his quote, “Be the change that you wish to see in the world”, is also put up in the former Congress chief’s container.

The containers are colour-coded according to their occupant capacity.

Those marked yellow are single-bed containers. The containers marked with blue have two beds each, with a washroom. The red and orange zone containers house bunk beds and a train compartment like feel.

There is also a pink zone for women yatris, with attached bathrooms.

General camp guidelines put up in various containers state that consumption of liquor, tobacco and smoking is prohibited.

The Congress said its “Bharat Yatris” were staying in containers which have very “basic and minimal” facilities, and claimed that the BJP was trying to “defame” its “Bharat Jodo Yatra” as it was rattled by it.

The Opposition party alleged that the BJP IT cell was spreading falsehoods about the facilities at its yatra campsites and in containers.

Congress general secretary Jairam Ramesh also took a dig at the BJP, saying this is not like the 1990 “Rath Yatra” a “Toyota yatra” or an “Innova yatra”, ours is a padyatra.

The attack by the Opposition party came after it gave access to the media to its campsite in Nagercoil where the 60 containers were parked.

About 230 people, including 119 “Bharat Yatris” who will walk the full 3,570 km from Kanyakumari to Kashmir will spend their nights in 60 containers mounted on trucks that will be moved daily from one place to another.

There are also four-bed, six-bed, eight-bed and 12-bed containers. While some have attached toilets, others do not. Mobile toilets and showers, mounted on trucks, are also parked at the campsites.

The site visited by the media was Scott Christian College, Nagercoil, where the yatris spent Thursday night.

He said his container has two bunks and is like a second AC train compartment.

There is an area for having meals at the campsite and a conference room container which can accommodate 10 people, Ramesh said.

Hitting out at the BJP, Ramesh said they only have “propaganda” to peddle.

“The allegations that have been made by the BJP IT cell with the encouragement of the prime minister (Narendra Modi) to defame the “Bharat Jodo Yatra” show that the BJP is rattled,” Ramesh said.

The BJP is making these allegations in its nervousness, he claimed.

“They should come and see what the reality is. We are not hiding anything, there is complete transparency. Look at the way we are staying, it would take about 160 days (to complete the Yatra),” he said.

This is “very basic” and “very minimal”, Ramesh said.

“I wish both Amit Shah and Amit Malviya see these containers and then they will know what it is to live in a container. This is not like the Rath Yatra. It is not a Toyota yatra’ or an Innova yatra’. Ours is a padyatra,” Ramesh said. The containers are not Made in China, he added.

The facilities are very basic. It is like what you would expect while travelling in a second AC rail compartment, he said.

He said the camp sites are mostly for the 119 ‘Bharat Yatris’, support staff and people managing the camps. Ramesh said the food for the yatris is being managed by the party’s state units.

Rahul Gandhi, along with several of his party colleagues, embarked on the 3,570-km “Bharat Jodo Yatra” from here on Thursday.

Amid sounds of drum beats, a sea of Tricolours and slogans of “Bharat jodo”, the march began from Vivekananda College Road, Agasteeswaram, on Thursday.

The march would cover 12 states and two Union Territories in about five months.

The march is moving in two batches from 7 am to 10.30 am and from 3.30 pm to 6.30 pm. While the morning session includes fewer participants, the evening session sees mass mobilisation.

The participants plan to walk around 22-23 km daily.