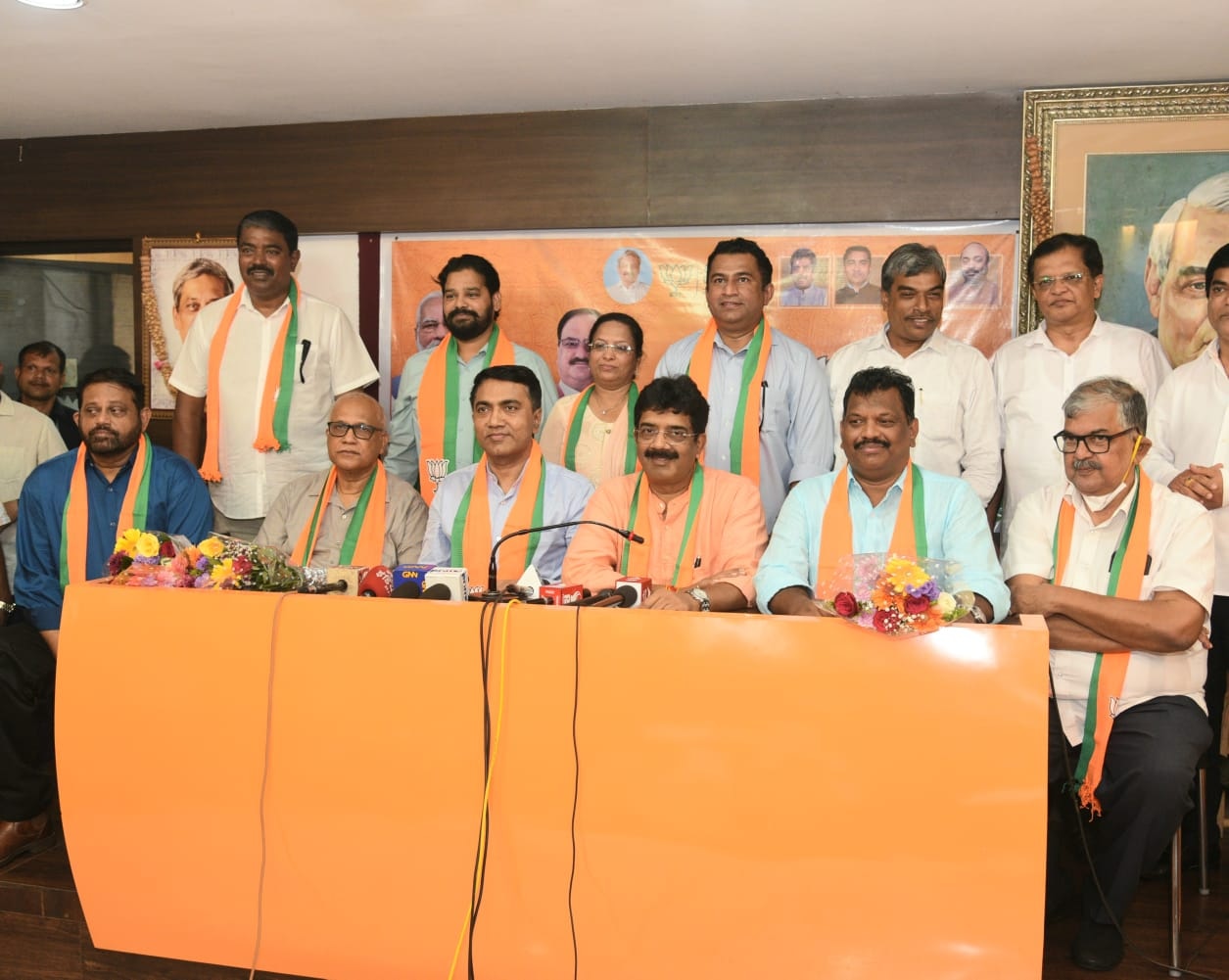 PANAJI: Eight Congress MLAs in Goa, including former chief minister Digambar Kamat, on Wednesday joined the ruling BJP, dealing a body blow to the opposition party which is now left with just three MLAs in the 40-member Assembly.

Kamat told reporters that he visited the temple where in January he took a pledge to remain faithful to the people and the party after the Assembly elections held two months later.

“I went to the temple again and asked God what to do. God told me do whatever is best for you,” he said.

The Congress termed the move as “height of betrayal and shamelessness” on part of the MLAs who had pledged to remain faithful to the people and the party after the Assembly elections.

In January, they had taken the loyalty pledge at a temple, church and dargah in Goa ahead of the elections.

The crossing over of eight of its Goa MLAs to the BJP is part of the ruling party’s ‘Operation Kichad’, the Congress said and claimed the “break” was fast-tracked because of the visible success of its Bharat Jodo Yatra.

“Operation Kichad of BJP in Goa has been fast tracked because of the visible success of the Bharat Jodo Yatra. BJP is nervous,” Congress general secretary in-charge communications Jairam Ramesh tweeted.

“A daily dose of diversion & disinformation is handed out to undermine the Yatra. We remain undeterred. We will overcome these dirty tricks of the BJP,” he said.

His party colleague Pawan Khera echoed him and said the BJP, rattled by the Bharat Jodo Yatra, had organised ‘Operation Kichad (mud)’ in the coastal state.

The BJP retained power in the coastal state after the state Assembly elections in February this year. It has 20 MLAs in the Assembly, while the Congress’ strength will be depleted from 11 to three.

Michael Lobo said the MLAs took the decision to strengthen the hands of Prime Minister Narendra Modi and Sawant.

Earlier on Wednesday, a resolution was passed in the Congress Legislature Party meeting here to merge with the BJP, Lobo said.

The three MLAs who did not switch sides — Yuri Alemao, Altone D’Costa and Carlose Alvares Ferreira – were not present at the meeting and said they would stay with the party.

“The party is not dependent on MLAs. Congress will remain firm in the state even if the MLAs have left it,” Alemao said.

“We are giving our word that we will be with the party and will remain strong. We are not some commodity that can be purchased,” he added.

Stating that prior to the elections Congress candidates had taken an oath not to defect, Alemao said, “I don’t know how someone can defy God.” Carlose Alvares Ferreira said the eight MLAs could not be said to have merged with the BJP. “If they have merged Congress into the BJP, then which party we (three) belong to,” he asked.

Ferreira, a former advocate general, said the same thing happened in 2019 when ten out of 15 Congress MLAs joined BJP.

“The Congress party has challenged it in the court. The matter is pending before the Supreme Court,” he said.

Altone D’Costa said he was happy that he stood by the party on whose ticket he was elected.

Goa Congress chief Amit Patkar said the party had taken all the precautions against defections. “Earlier, BJP was murdering democracy at night, now they are doing it in broad daylight,” he said.

CM Sawant told reporters that no decision has been taken yet on a cabinet reshuffle in the backdrop of the BJP strength rising to 28 in the House.

The Congress MLAs have joined the BJP unconditionally, Sawant said.

Sawant said the BJP now has 28 MLAs and enjoys support of 33 MLAs altogether in the Assembly.

Sawant said the “Congress Chhodo Yatra” has begun from Goa, as seen from the influx of that party’s legislators into the BJP.

In this article:BJP, Congress, Goa