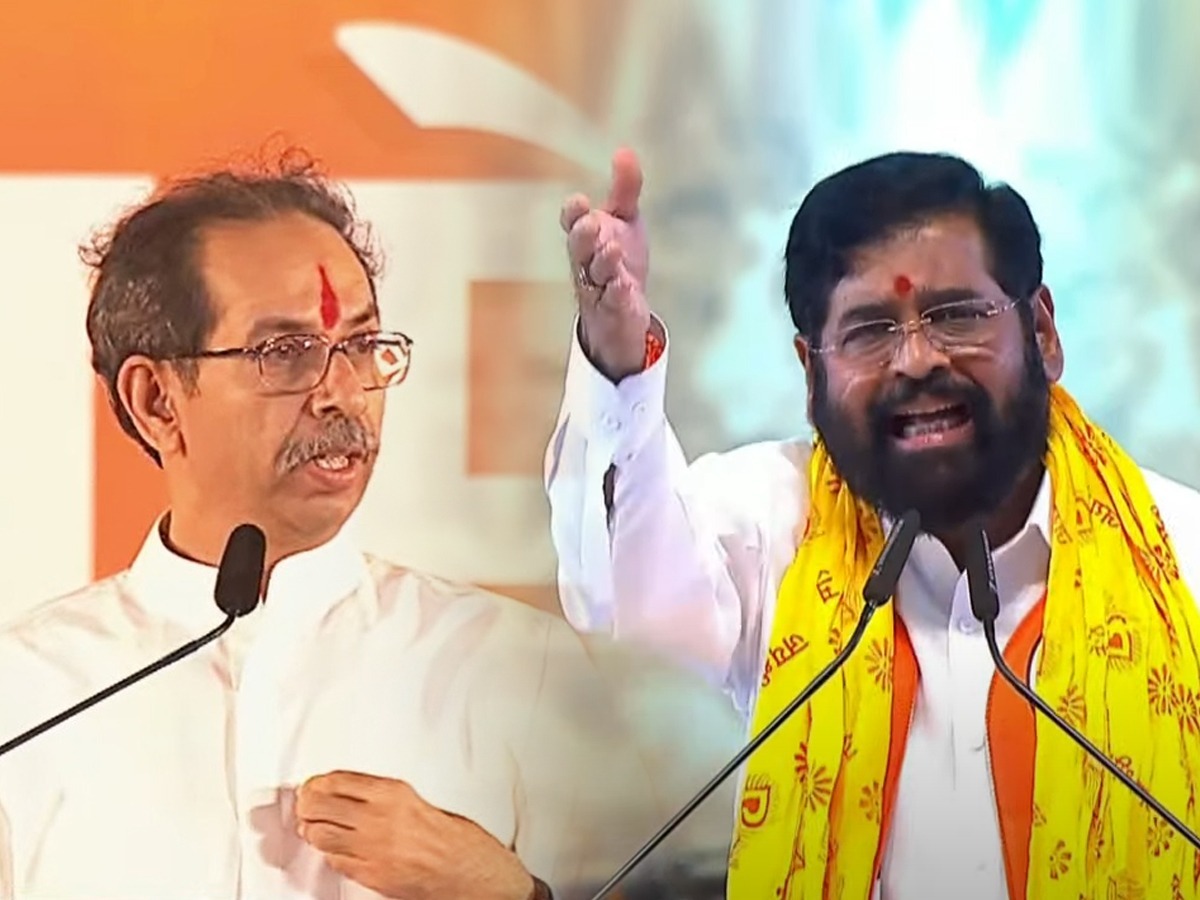 MUMBAI: Maharashtra Chief Minister Eknath Shinde and his predecessor Uddhav Thackeray on Wednesday bitterly traded charges and used caustic terms like ”traitors” and ”betrayer” as Shiv Sena groups headed by them held Dussehra rallies in Mumbai in what was a parallel show of strength by the rivals after the change of government three months ago.

While Uddhav Thackeray branded Shinde and his supporters as ”traitors” for teaming up with the BJP to wrest power, the CM said Thackeray had ”betrayed” people of Maharashtra who voted for the Sena and the national party to form an alliance government, by teaming up with the Congress and the NCP after the 2019 Assembly elections.

Thackeray made a 43-minute-long speech at Shivaji Park ground in central Mumbai, where his party has been holding the Dussehra rallies since its inception in 1966, while Shinde addressed the crowd for an hour and a half at a bigger ground at Bandra Kurla Complex in the suburbs.

Shinde asserted his rebellion was not an act of ”betrayal”, but a ”revolt” and asked Uddhav Thackeray to kneel down at party founder Bal Thackeray’s memorial in Mumbai and apologise for going against his ideals and aligning with the Congress and the Nationalist Congress Party (NCP).

Shinde said voters in the state elected the Shiv Sena and the BJP in the 2019 Assembly elections, but Thackeray ”betrayed” people by joining hands with the Congress and the NCP to form the Maha Vikas Aghadi (MVA) government.

He said massive crowds at his Dussehra rally was proof enough to show who are true inheritors of Bal Thackeray’s legacy.

Slamming Thackeray, Shinde, who heads the rebel faction of the party, said the Shiv Sena was not a “private limited company” and maintained the 56-year-old outfit was built through hard work of common Sena workers.

The chief minister stoutly defended his rebellion against Thackeray’s leadership in June that brought down the MVA government.

Shinde asserted his rebellion was not an act of ”betrayal” (gaddari), but a revolt (gadar).

The Thackeray-led faction of the Shiv Sena has often targeted rebels as ”traitors”.

”We did not do ‘gaddari’ (betrayal), but this (rebellion) was ‘gaddar’ (revolt). We are not ‘gaddar’ (traitor), but soldiers of Balasaheb (Shiv Sena founder Bal Thackeray). You sold Balasaheb principles. Who are real traitors who betrayed Hindutva for the sake of power?” Shinde said.

The rally was attended by Jaidev Thackeray, brother of Uddhav Thackeray, and his estranged wife Smita Thackeray. Nihar Thackeray, grandson of late Bal Thackeray, also attended the rally besides Champa Singh Thapa, a long-time personal aide of the Sena founder.

Thackeray, who started his speech ahead of Shinde, mounted a scathing attack on the chief minister and his supporters, saying their reputation as ”traitors” will never be washed away.

”As time changes, Ravan’s face also changes. Today, it is the traitors (who are Ravan). When I was unwell and underwent a surgery, I had given the responsibility to him (Shinde). But he conspired against me thinking I will never stand up on my feet again,” the former chief minister said.

The Shiv Sena does not belong to any one person, but it belongs to all loyal party workers, Thackeray said, adding, ”If you feel I should not remain the Sena president, I will quit.” ”There is a limit to lust for power…After the act of treachery, he now wants the party, its symbol and also wants to be called the party president,” Thackeray said, targeting his one-time trusted aide who served under him in the MVA cabinet.

He formed a post-poll alliance with the Congress and the NCP to teach the BJP, the Sena’s former ally, a lesson for breaking its promises, Thackeray maintained.

”I swear on my parents that it had been decided that the BJP and Shiv Sena will share the chief minister’s post for two and a half years,” Thackeray said.

The Sena had parted ways with the ally BJP after the 2019 Maharashtra Assembly polls following differences over the issue of sharing the post of chief minister.

Thackeray also said he did not need lessons on Hindutva from the BJP.

”BJP leaders visited (then-Pakistan prime minister) Nawaz Sharif on his birthday without invitation and bowed before Jinnah’s grave,” he said.

He accused the BJP of raising the Hindutva issue to divert attention from poverty, unemployment and inflation.

”RSS general secretary Dattatreya Hosabale has shown BJP the mirror,” he said, referring to Hosabale’s statement about the challenges of rising income inequality and unemployment.

Facing a grave challenge of retaining control over the party founded by his father late Bal Thackeray, Uddhav sought support and strength from the Sena cadre, saying the party will bounce back.

”Today I have nothing. But with your support the Shiv Sena will rise again. I will make a Shiv Sena worker chief minister again. We have to defeat the traitors in every election,” he said, in apparent reference to the November 3 Assembly byelection in Andheri (East) in Mumbai Thackeray took a ‘Bahubali’ jibe at Shinde and compared him to the character ‘Katappa’ in the superhit film.

Uddhav said, ”The only thing I feel bad and angry about is that when I was admitted to the hospital, the people whom I gave the responsibility (of the state) became ‘Katappa’ and betrayed us… They were cutting me and thinking that I will never return from hospital.” Shinde said, “They call me ‘Katappa’. I want to tell you, that even ‘Katappa’ had self-respect, and did not have double standard like you.” Hitting back at Uddhav Thackeray for calling him “Katappa”, a character portrayed as a betrayer in the movie ‘Bahubali’, the chief minister said he was not someone who practised double standards.

Questioning Uddhav Thackeray’s style of working, Shinde asked how many times he visited Mantralaya, the state secretariat in south Mumbai, when he was the chief minister (November 2019-June 2022).

Administrative works came to a virtual standstill in the two-and-a-half years of the MVA government led by Uddhav Thackeray, he claimed.

Shinde said while Uddhav Thackeray was “working from home”, he, on becoming chief minister on June 30, resorted to “work without home”.

Although the chief minister hailed from the Shiv Sena, it was the NCP which ran the show in the previous dispensation, Shinde said.

Shinde assured that the Maratha community, which has been demanding reservation in government jobs and education for long will get justice.

He said in the next two years, there will be a ‘development model’ of Maharashtra.