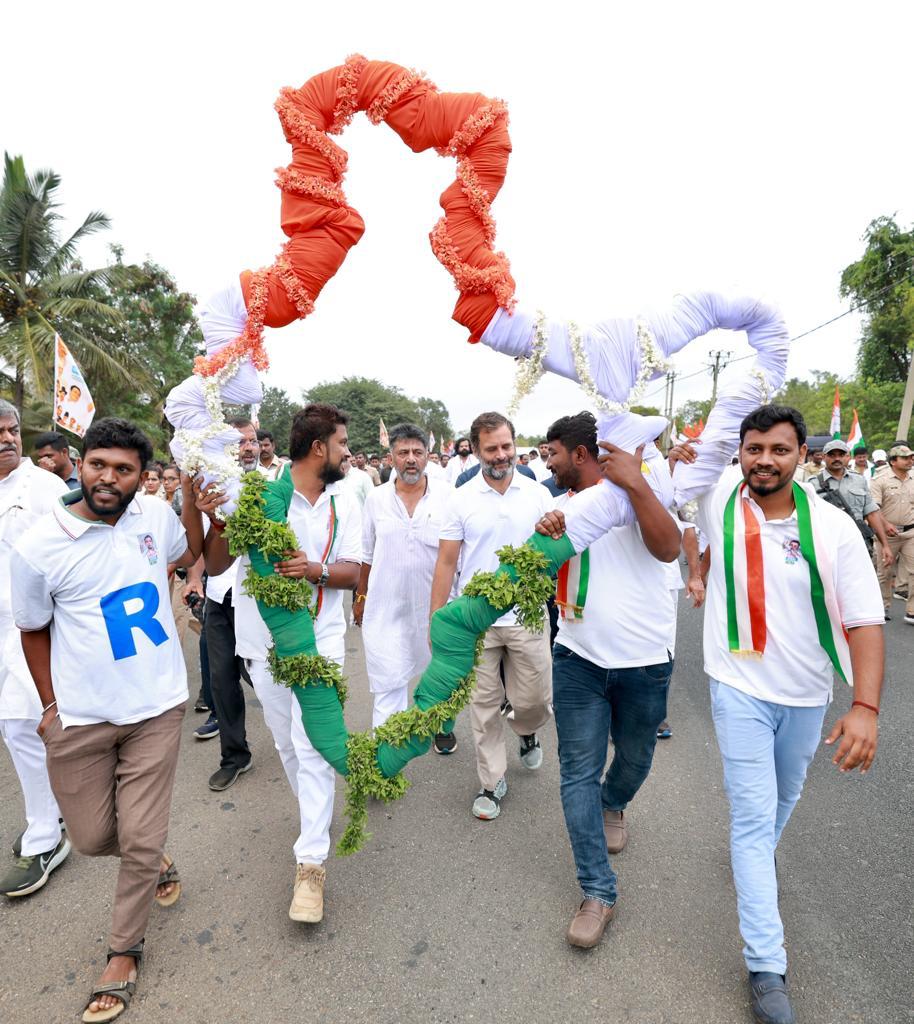 TUMKUR: Holding banners against ”rising” unemployment and communal divide in society, a group of youths met Congress leader Rahul Gandhi on Sunday and joined him in the Bharat Jodo Yatra which, the party said, seeks to highlight their issues.

The children of today will make the India of tomorrow. The way we bring them up will determine the future of the country.
– Pt. Jawaharlal Nehru#BharatJodoYatra pic.twitter.com/ZB4Ab1zRGI

On the 32nd day of the yatra that started on September 7, Gandhi said some political parties were trying to spread hatred in the country by misleading youngsters.

The former Congress president, who was accompanied by senior leader Siddaramaiah and Karnataka PCC president D K Shivakumar, interacted with many people, including children, women and a local singer, during his 20-km yatra on Sunday.

The #BharatJodoYatra is a movement for a bright future for these young minds. pic.twitter.com/btTFYwtGlY

He appealed to the youth to join the yatra to spread the message of peace and brotherhood and unite India.

Sharing a picture of his interaction, Gandhi said these youths are saying that there is no room for hate in our beloved India.

”Why are the people of the country raising their voices against hatred? You all know it,” he said.

We will sow the seeds of unity every where we go,
so India can bear the fruit of love & compassion, and grow.#BharatJodoYatra pic.twitter.com/XFUDpxfHem

The former Congress chief said a few years ago, the country did not have such an atmosphere as exists today.

”Earlier there was brotherhood, there was mutual love, but today it is not like this. And this is a big reason for the ‘Bharat Jodo Yatra,” he said in a Facebook post in Hindi.

Noting that the youth are the future of our country, he said, ”They don’t want hate, they want love, they want employment so that they can make the future of themselves, their family and country.” ”Some political parties are misleading these youth, keeping them unemployed, for doing their hate politics,” he said.

”We have to save the youth from going astray, create a better tomorrow for them, organise good education and employment,” he said.

Gandhi said the Bharat Jodo Yatra is getting great support from the youth. ”They are openly talking to me and I am listening to them. Our youth are so talented. Throwing them in the fire of hatred will destroy the future of the country.” Gandhi said people of every religion and every caste are walking together in the yatra, hand in hand, without asking each other’s names.

The future demands the young blood & the old guard to work together. A new India requires the collective will of both.
The #BharatJodoYatra is building bridges, bringing about a promising future. pic.twitter.com/nu5bNbowHb

If someone is left behind, people stop for him, if someone falls, people support him and pick him up, he noted.

”The beauty of this journey is its unity and integrity. Our India was like this before and we have to make that beautiful India again.

”We are all moving forward with the message of peace and people are continuing to join us. Come, let’s raise the voice of these youth and unite India together,” Gandhi said.