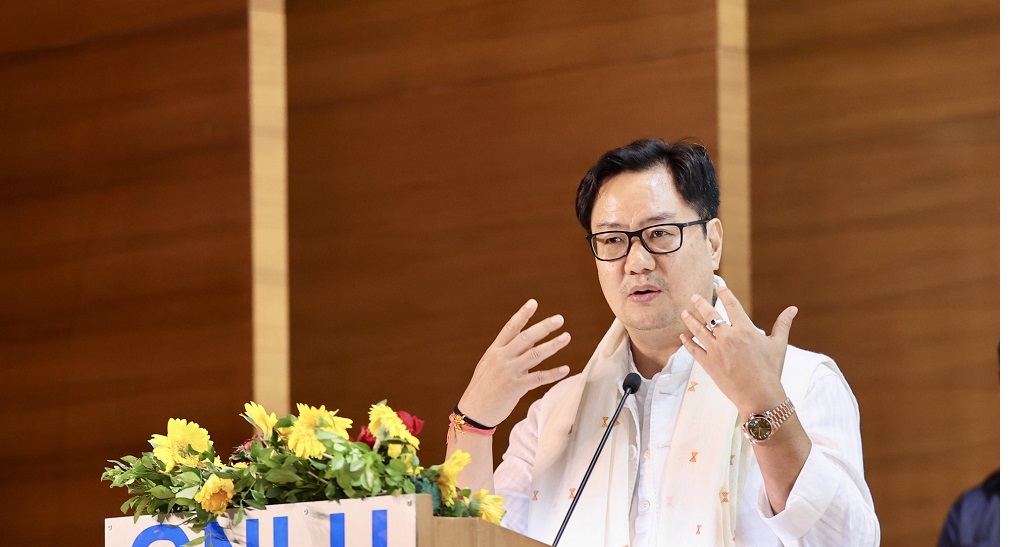 NEW DELHI: India’s Law and Justice Minister Kiren Rijiju said the people of the country are not happy with the collegium system and according to the spirit of the Constitution, it is the government’s job to appoint judges.

Speaking at ‘Sabarmati Samvad’ organised here on Monday by ‘Panchjanya’, a weekly magazine published by the RSS, he said he has observed that half of the time judges are “preoccupied” with deciding the appointments, due to which their primary job of delivering justice “suffers”.

The minister’s remarks came after he had said at a conference in Jaipur last month that there is a need to rethink the collegium system of appointments to the higher judiciary.

“Till 1993, every judge in India was appointed by the law ministry in consultation with the Chief Justice of India. We had very eminent judges at that time,” Rijiju said in response to a question on the process of appointment of judges.

“The Supreme Court in 1993 defined consultation as concurrence. In no other field has consultation been defined as concurrence but in judicial appointments,” he said, adding that the collegium system was expanded by the judiciary in 1998.

The Supreme Court collegium is headed by the Chief Justice of India and comprises four seniormost judges of the court.

While the government can raise objections or seek clarifications regarding the collegium’s recommendations, it is bound by procedure to clear the names if the five-member body reiterates them.

“I am aware that the people of the country are not happy with the collegium system of appointment of judges. If we go by the spirit of the Constitution, appointing judges is the job of the government,” said.

“Second thing, nowhere in the world except India is there a practice that judges appoint their brothers as judges.

“Third, as the law minister, I have observed that half of the time and minds of judges are preoccupied with deciding who will be the next judge. Their primary work is to give justice, which suffers due to this practice,” he said.

“Further, the process of consultation for the selection of judges is so intense that, I am sorry to say such a thing, groupism develops in it. People can see politics among leaders but they do not know the politics going on inside the judiciary,” he added.

Rijiju said the law ministry’s job is to see that the person whose name has been recommended for appointment by the collegium is fit to be a Supreme Court or high court judge.

In 2014, the NDA government had tried to change the system of appointing judges.

The National Judicial Appointments Commission (NJAC) Act brought in 2014 would have accorded a major role to the executive in appointing judges to the higher judiciary. However, it was struck down by the Supreme Court in 2015.

Responding to a question on judicial activism, Rijiju said, “Several judges pass observations which never become part of the judgement. During my consultations with them, I have requested them to refrain from it, especially when live streaming of court proceedings is taking place. They are being judged by the people.”

“As a judge, you might not know the practical difficulties or even financial implications of the order you pass,” he said.