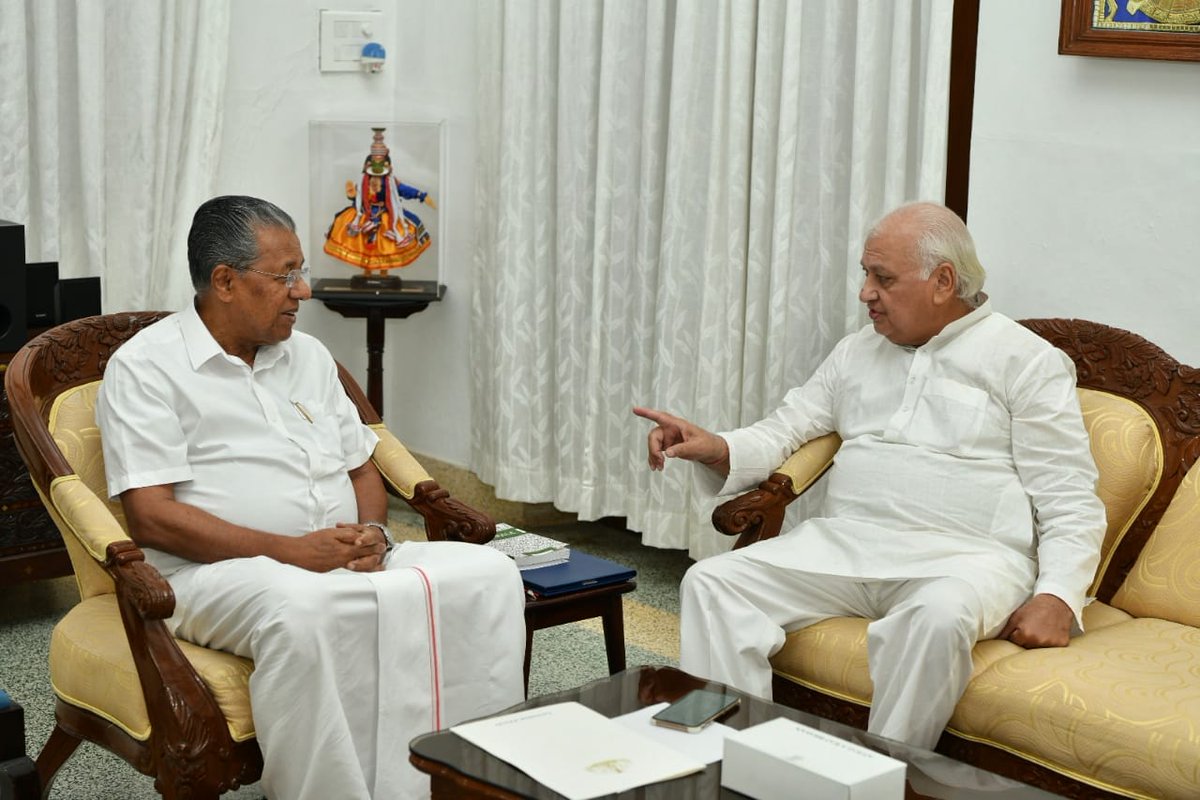 THIRUVANANTHAPURAM: Kerala Governor Arif Mohammed Khan has written to Chief Minister Pinarayi Vijayan informing he has “ceased to enjoy pleasure” in Finance Minister K N Balagopal, accusing him of making speech undermining unity, and urged the CM to take constitutionally appropriate action against his cabinet colleague, a demand turned down by the latter.

The Chief Minister has shot back a letter to the Governor rejecting his demand seeking action against Balagopal, an official source told PTI.

He reiterated his trust on Balagopal, saying it remains “undiminished.”

In his letter, the Governor did not explicitly seek for the removal/withdrawal of Balagopal from the LDF cabinet but it seemed to be the essence of his communication to Vijayan.

A highly placed source said that in his response, Vijayan said that from a constitutional perspective and factoring in the democratic conventions and traditions of the country, the statement cannot warrant a ground for cessation of enjoyment of the Governor’s pleasure.

The Governor will appreciate that no further action needs to be taken in the matter, Vijayan said, according to the source.

In his letter to the CM, the Governor alleged that Balagopal delivered a speech at a University campus here on October 18, seeking to stoke the fire of regionalism and provincialism and undermining the unity of India and he was left with no option but to convey that the Finance Minister has “ceased to enjoy my pleasure”.

Stating the reported statements of Balagopal are nothing short of violation of oath he had administered to him, Khan directed Vijayan to take action which was constitutionally appropriate.

This the first such move by the governor after Raj Bhavan PRO tweeted on October 17 that the chief minister and Council of Ministers have right to advise governor but statements of individual ministers that lower the dignity of the office of the Governor, can invite action including “withdrawal of pleasure.”

Quoting the newspaper reports of October 19, the Governor alleged the comments made by Balagopal and state Higher Education Minister R Bindu at a function organised at Karyavattom campus of the Kerala University were “clearly aimed at tarnishing the image of the Governor and lowering the dignity of office of the Governor”.

“But the most disturbing were the comments made by the Finance Minister which seek to stoke the fire of regionalism and provincialism and if allowed to go unchecked they may have erosive and baneful influence on our national unity and integrity”, the Governor said in the letter.

It carried the newspaper reports quoting Balagopal who reportedly said at the function that those who come from places like Uttar Pradesh, may find it tough to understand universities in Kerala.

The Governor said, “the above mentioned remarks of the Finance Minister seek to create a wedge between Kerala and other States of Indian Union and project a false impression as if different States of India have different systems of higher education”.

Khan alleged that the reported statements of Balagopal are nothing short of violation of the oath he had administered to him.

“A minister who deliberately violates the oath and undermines the unity and integrity of India cannot continue to enjoy my pleasure. In these circumstances, I am left with no option but to convey that Balagopal has ceased to enjoy my pleasure”, the Governor said and expressed hope that the Chief Minister will “consider the matter with seriousness it deserves and take action which is constitutionally appropriate”.

Khan also claimed that the assertions of Balagopal have no basis as the higher education in all states of India is subject to UGC Regulations which issues not only guidelines to conduct the affairs of the Universities but also provides substantial monetary assistance.

The Acts/Statutes of Indian Universities are more or less the same and Kerala’s Universities have had Vice Chancellors from outside the state.

The NAAC grading of our Universities are also assessed and granted by non Keralite Peer Teams, the Governor said in his letter to the CM.

Khan said the comments of the Finance Minister challenge not only the national unity and integrity but also the Constitutional Convention that makes it necessary that Governor of each state shall be from outside the state.

He stated Balagopal also seems to be blissfully unaware that Banaras Hindu University is a Central University and it does not come under the administrative control of Uttar Pradesh government and it had more Vice Chancellors from other states including from southern than from UP.