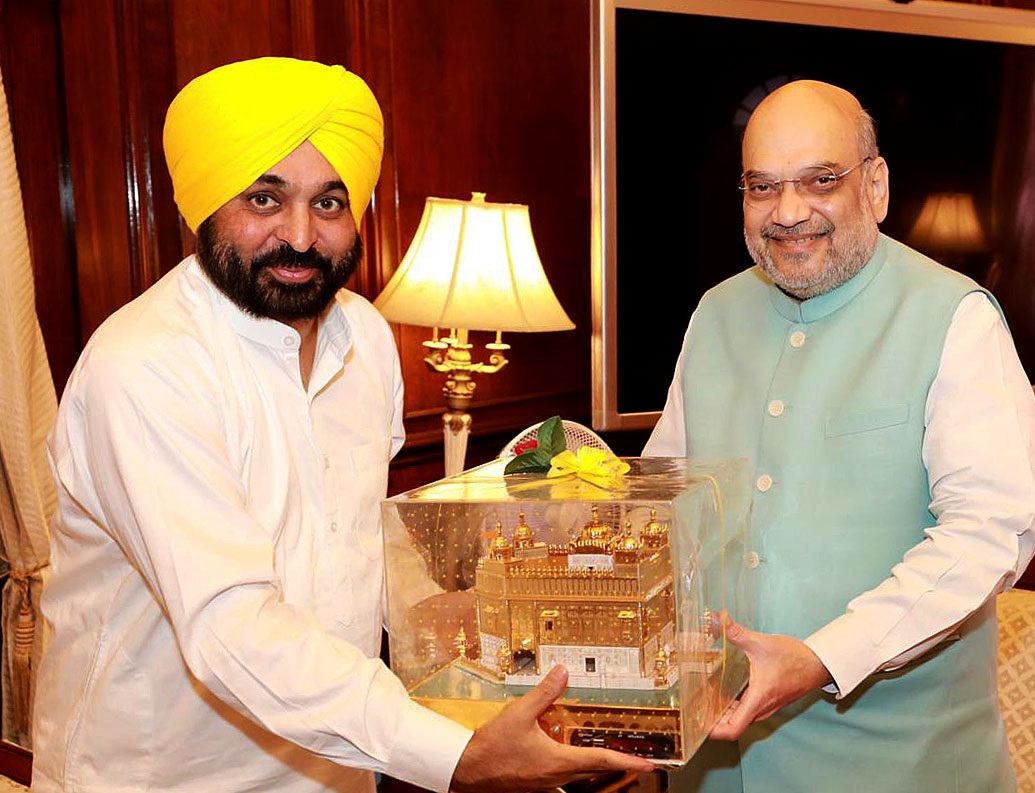 FARIDABAD: Punjab Chief Minister Bhagwant Mann urged Union Home Minister Amit Shah on Thursday to sympathetically look into the problems being faced by farmers along the India-Pakistan border fence in the state.

Addressing a two-day “Chintan Shivir” of home ministers here, Mann urged Shah to reduce the distance between the border fence and the actual border to facilitate the farmers cultivating their land across the fence, according to an official release.

The chief minister said the distance must be reduced to 150-200 metres, instead of the existing around one kilometre, to ensure that the farmers of the border region benefit from it.

He said this will ensure optimum utilisation of the land on one hand and strengthen the security of the country on the other.

Flagging another issue, Mann urged the Centre to set up a regional centre of the National Security Guards (NSG) at Pathankot.

He said the setting up of the NSG centre at Pathankot will help effectively combat any terror activity in the entire northern region.

Referring to the 2015 Dinanagar terror attack, the Aam Aadmi Party (AAP) leader said NSG commandoes had to be rushed from Gurugram then.

Pointing out that Punjab is a sensitive state with a 553-km border with Pakistan, Mann batted for the inclusion of the state in “Category A” for security reasons, instead of the present “Category B”.

Being a border state, Punjab should be considered in “Category A”, he said, adding that it should be treated on par with Jammu and Kashmir, Uttarakhand, Himachal Pradesh and the northeastern states.

He pleaded for the release of the pending funds under the Border Area Development Programme (BADP) and bemoaned that the amount has not been disbursed for the last two financial years.

Mann also sought an exemption for the state with regard to Modernisation of Police Force (MoPF) funds. He said at present, the MoPF scheme has discontinued the grant of funds for construction work and operational vehicles for the “Category B” states.

However, Mann said Punjab should be given an exemption and allowed to spend the MoPF funds on construction and vehicles.

Mann also sought Shah’s intervention for the approval of the State Action Plan (SAP) of Rs 24 crore for 2022-23.

In view of the sensitive security scenario in Punjab, additional funds to the tune of Rs 50 crore should be provided to the state for strengthening the border police stations and the intelligence infrastructure, he said.

There are many emerging security challenges and the Punjab government is taking all necessary steps to address those in coordination with the Border Security Force (BSF) and other central agencies, the chief minister said.

He thanked Shah for announcing that a high-security jail and a forensic science laboratory would be set up in the state, adding that the AAP government is identifying land for the two projects.

Meanwhile, Haryana Chief Minister Manohar Lal Khattar stressed upon adopting a scientific approach to check criminal incidents and said along with face and biometric recognition, work should also be done on voice recognition.

The Gujarat Forensic Science University campus should be expanded to other states, including Haryana, so that the task of arresting and punishing criminals becomes easier, Khattar said in his address.

Welcoming Shah on his arrival at Surajkund, the venue of the meet, Khattar said it is a commendable effort of the Centre to use information technology to tackle the challenges faced by law.

Khattar said with the increasing use of technology, criminals have started adopting new ways to carry out their illegal activities.

“To tighten the noose around these cyber thugs, the Haryana government has also done the work to make the state police IT efficient,” he said.