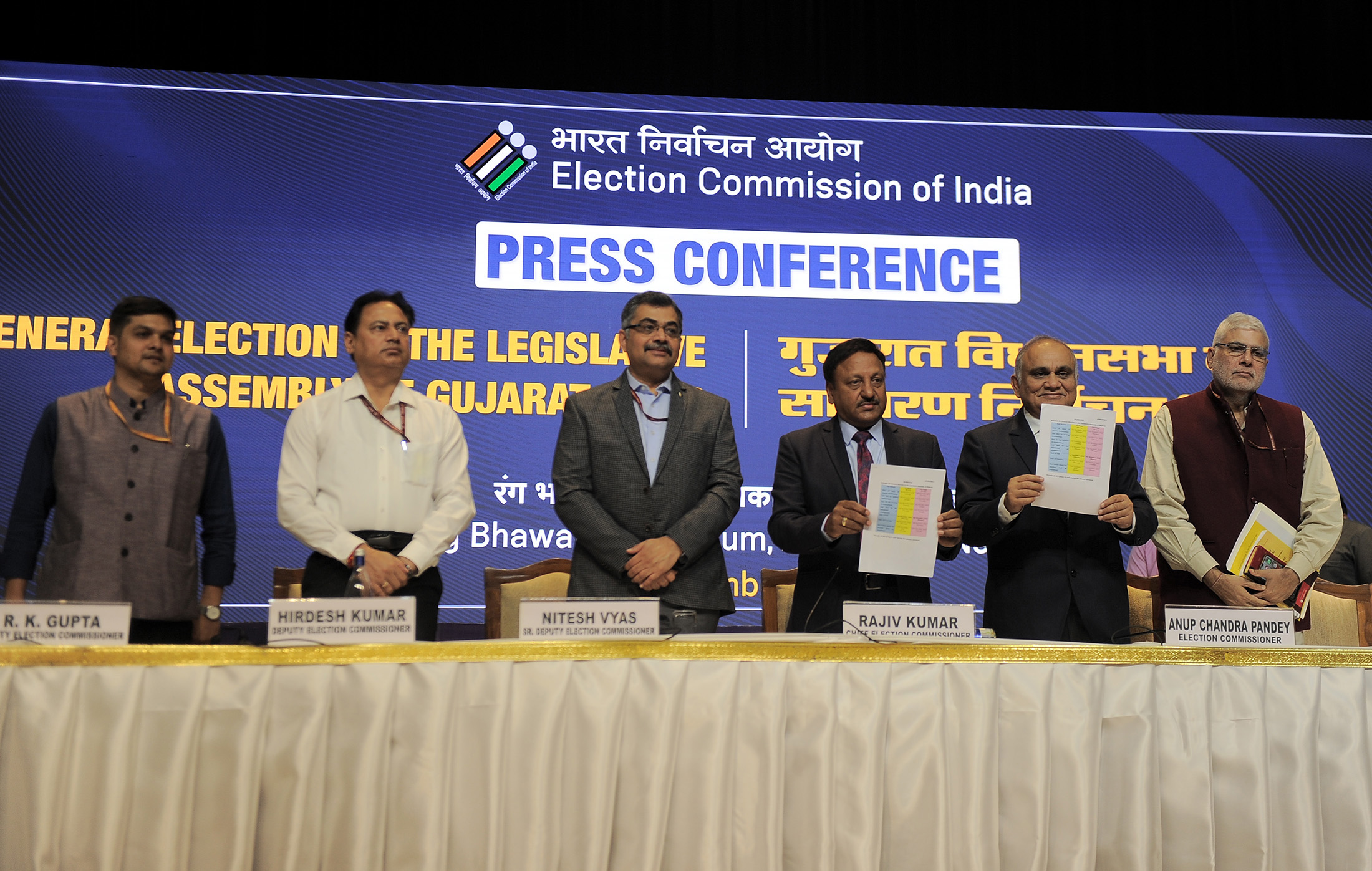 NEW DELHI: Gujarat will go to polls in two phases on December 1 and 5 with the counting of votes on December 8 along with that of Himachal Pradesh, Chief Election Commissioner Rajiv Kumar announced on Thursday.

Schedule for GE to the Legislative Assembly of Gujarat.
#GujaratElections2022 #ECI pic.twitter.com/0A6CSUIJV5

Of the total 182 assembly seats in Gujarat, voting for 89 seats will be held on December 1 and the balance 93 seats on December 5.

Gujarat has a 182 member assembly and the BJP had pulled off its sixth consecutive victory winning 99 seats in the last polls, while the Congress put up a spirited fight by bagging 77 seats. In percentage terms, the BJP had polled 49.05 per cent of the valid votes, while Congress had polled 42.97 per cent.

The Congress witnessed a series of defections after the assembly elections and the BJP increased its tally in the House to 111. The Congress numbers were reduced to 62.

The Aam Aadmi Party (AAP) has trained its sights on Gujarat and has already entered the election mode. Delhi Chief Minister Arvind Kejriwal has made several trips to Gujarat in his bid to make inroads for the AAP in the state after a successful foray in Punjab.

Also, these elections along with a few more in other states in 2023 are being seen as crucial in the run up to the 2024 Lok Sabha elections when Modi and BJP will bid for their third consecutive government at the Centre.

The Election Commission on Thursday announced that elections to the 182-member Gujarat Assembly will be held in two phases on December 1 and 5, while counting of votes will be held on December 8.

BJP president J P Nadda on Thursday welcomed the announcement of the Gujarat assembly polls and claimed that his party will again form “double engine” government in the state with a big majority under Prime Minister Narendra Modi’s leadership.

In a tweet after the Election Commission announced the poll schedule, Nadda added that the BJP will work with commitment to fulfil people’s aspirations in the next five years.

Beside Nadda, Gujarat Chief Minister Bhupendra Patel said his party would once again retain power in the state. “Election Commission has announced dates of Gujarat polls. New voters and the people of state will bless BJP’s politics of development and visionary leadership. I am of the firm belief that once again lotus will bloom in Gujarat,” Patel tweeted.

Lotus is the election symbol of the BJP.

Delhi Chief Minister Arvind Kejriwal, who has been paying visits to Gujarat every week as part of the AAP’s campaign, is hopeful of a change of guard in Gujarat.

“People of Gujarat are ready for a big change. We will definitely win,” the AAP national convener said in a tweet.

Congress, which has been in the opposition in Gujarat for the last more than 27 years, also said it would emerge victorious.

“Seven crore brothers and sisters of Gujarat think that Congress is the only alternative for change in the state,” party president Mallikarjun Kharge tweeted.

He also listed 10 promises made by the Congress to the people of Gujarat and said, “Change will come and lives of people of Gujarat will be filled with happiness.” The state administration is taking steps for the smooth conduct of the elections. Posters and hoarding of government advertisements are being removed from all over the state after the poll schedule was announced, an official said.

Of the total 182 assembly seats in Gujarat, voting for 89 seats will be held on December 1 and the balance 93 seats on December 5. A notification for the assembly elections will be issued on November 5 and November 10 for the first and the second phases respectively.

In the 2017 Assembly polls, the BJP had pulled off its sixth consecutive victory by winning 99 seats, while the Congress had put up a spirited fight by bagging 77 seats.

These elections along with a few more in other states in 2023 are being seen as crucial in the run up to the 2024 Lok Sabha polls when Prime Minister Narendra Modi and BJP will bid for their third consecutive government at the Centre.