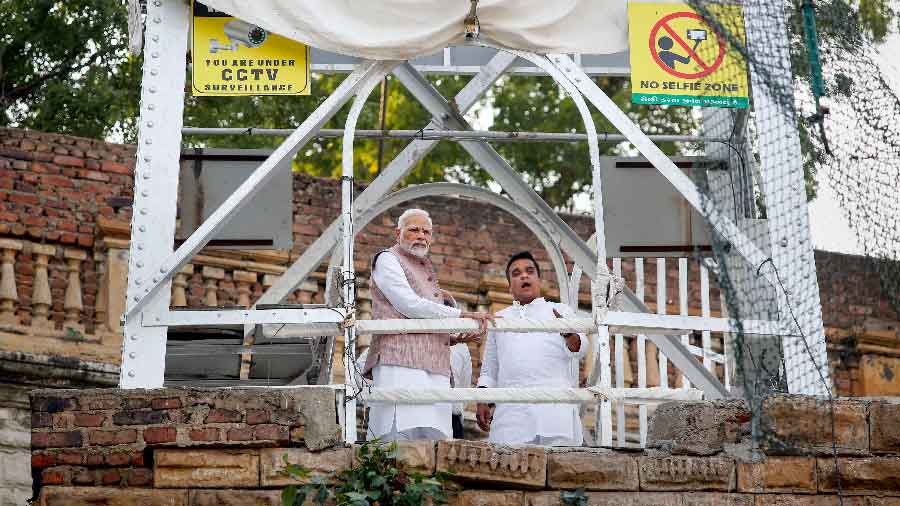 MORBI: Though the Patidar-dominated Morbi Assembly seat in Gujarat is considered a stronghold of the Bharatiya Janata Party (BJP), the poll equations this time may change due to many factors, including the recent bridge tragedy which claimed 135 lives, political observers say.

The entry of the Arvind Kejriwal-led Aam Aadmi Party (AAP) into the poll fray and the long-pending urban infrastructure issues could also be among the decisive factors in Morbi where the winning margins have been thin in the last three elections, the political experts told PTI.

The erstwhile Morbi princely state was called as the ‘Paris of Saurashtra region’ before Independence, thanks to its visionary Jadeja rulers.

Today, it is famous for the ceramic and clock industries, providing employment to more than five lakh people who come here from across the country for jobs. However, the economic development in Morbi has been marred by bad roads and traffic jams, locals claim.

Bad roads and traffic problems have been some of the main issues here for many years, according to Morbi Ceramic Manufacturers Association’s floor tiles division president Vinod Bhadja.

”Morbi is a ceramic hub with a combined annual turnover of Rs 65,000 crore. Though the BJP has done a lot of work, we are still facing issues of traffic jams, water-logging and bad roads in and around the city,” the industrialist told PTI. ”The people of Morbi are somewhat unhappy because our main issues have remained unresolved for more than two decades now,” he claimed. Morbi witnessed some interesting political developments in the last decade, including the Patidar quota agitation spearheaded by Hardik Patel and the defeat of BJP’s five-term MLA Kantilal Amrutiya.

In 2017, Congress candidate Brijesh Merja defeated Amrutiya by a thin margin of 3,419 votes, riding on the anti-BJP wave in Morbi, one of the key centres of the Patidar quota agitation. In 2012, Amrutiya defeated Merja by 2,760 votes. Both of them are Patidars.

Merja, considered as a suave and learned leader, left the Congress in 2020 and joined the ruling BJP. In the subsequent byelection, he managed to defeat Congress’s old-timer Jayantilal Patel by 4,649 votes.

In the new cabinet constituted last year under the chief ministership of Bhupendra Patel, Merja was appointed Minister of State with independent charge of panchayat as well as skill, labour and employment departments.

When a suspension bridge on the Machchhu river in Morbi collapsed on October 30 evening claiming 135 lives, Amrutiya hogged limelight as videos showing him jumping into the water to rescue the victims went viral on social media platforms.

Though the BJP has not declared its candidates yet, political experts believe it will once again field Merja and not Amrutiya, despite his brave act and popularity among the masses.

”Most of the people in Morbi want to see Amrutiya as the BJP’s candidate. But even if Merja is selected, the BJP’s core electorate will eventually vote for him, because for them what ultimately matters is the party symbol,” local political analyst Ravindra Trivedi said. The candidate selection will be crucial this time because the winning margin in Morbi remains thin, he said.

Local grocery store owner Maulik Sanghvi said, ”We have no problem with the BJP and its government. But Amrutiya was better than Merja. Amrutiya was an MLA for nearly 25 years and no one came close to his performance. He should be given the ticket because he is perfect for Morbi.” According to Trivedi, the Congress’s chances of winning may increase if the party chooses young Patidar face Manoj Panara (Patel) instead of Jayantilal Patel, who lost to BJP candidates five times since 1995.

”Panara is a young Patidar face having considerable popularity. He was once with Hardik Patel during the quota agitation. He has a huge support base here,” Trivedi said. ”The Congress’s chances would go up if Panara is given a ticket instead of Jayantilal. The AAP candidate may not get more than 5,000 votes. It can change the final equation in view of the history of thin winning margins here,” the political analyst said. The AAP has already declared Pankaj Ransariya as its candidate, who is a known face in some Patidar pockets of Morbi, including Ravapar Road.

According to political analyst and local businessman K D Padsumbia, while Patidar voters are equally split between the Congress and BJP, the ruling party enjoys the support of the majority of Sathwara, Koli, and Dalit community members. Muslims have traditionally been with the Congress, but the AAP can make a dent in the Congress’s vote bank, he said.

”Though Merja’s performance as a minister was good and appreciated by the BJP leadership, Amrutiya’s popularity among the masses is much higher. But, the chances of Merja and Amrutiya getting the ticket are 70 per cent and 30 per cent respectively,” Padsumbia said. ”Nearly 20 per cent of the Muslim votes are expected to go to the AAP this time,” he added.