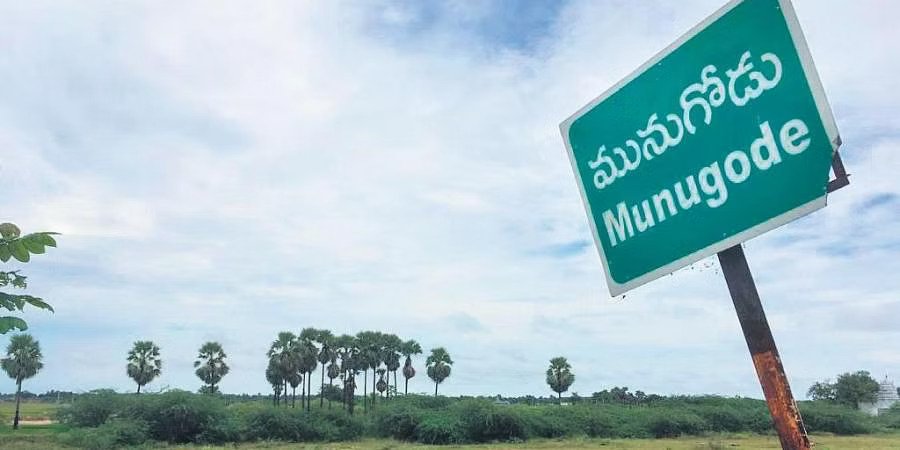 NEW DELHI: The outcome of the keenly-watched “winner takes it all” Munugode bypoll in Telangana has seen the emergence of BJP as the runner up, relegating Congress to the third spot, but it may still not be an easy task for the saffron party to come to power in the state in next year’s Assembly polls.

In the bitterly-fought contest in last week, the ruling TRS on Sunday managed to scrape through with a ‘meagre’ margin of over 10,000 votes,. The BJP stood second, while the Congress lost the security deposit.

BJP takes credit for having improved its votes in Munugode from a negligible number in 2018 to over 86,000 in the present byelection.

For the first time, BJP got more than 30 per cent votes in South Telangana, political analyst and columnist Ramu Suravajjula said.

Can BJP replicate its success in Munugode elsewhere in Telangana?

Noted political analyst Telakapalli Ravi feels that the BJP still has a long way to go and feels bypoll result has reduced BJP’s “hype” that it has “arrived.”

BJP not getting majority in urban areas in Munugode constituency where it was hopeful of, is a setback to the party, he said.

BJP’s recent successes in Telangana have come where it fielded strong candidates and it would not be adequate to come to power in the state if the party is heavily dependent on strong leaders for its electoral success, he said.

“They (BJP) may not get such strong candidates everywhere (in the 119 seats in Assembly polls),” Ravi says.

He also pointed out that the TRS and Left parties have come together in Munugode in their common desire to keep the BJP at bay.

Meanwhile, the Munugode bypoll seems to offer a lesson or two to the ruling TRS that won and Congress as well.

The byelection attracted national attention as it was seen as a semi final to the Assembly polls, even as it has made known its national ambitions with a new name for the party–the Bharat Rashtra Samiti (BRS).

Despite the win, what causes discomfiture to the TRS is the fact that a number of MLAs, ministers and other leaders campaigned hard in the bypoll.

“It’s a strong warning to the TRS before the general elections,” says Suravajjula.

Concerned over BJP’s rise in state as seen in its victory in the Huzurabad bypoll in November last year, preceded by Dubbak byelection and the Greater Hyderabad Municipal Corporation (GHMC) poll, the TRS leadership took the Munugode bypoll very seriously.

“In an unprecedented way, all ministers and MLAs were deployed… to show the BJP its place through the election. Despite the all out efforts, the TRS got a meagre 10,300 majority,” Suravajjula said.

Pointing to the support extended by CPI and CPI(M) to the TRS in the bypoll, Telakapalli Ravi said the Left parties have a traditional support base of around 10,000 votes in Munugode which is equal to the majority of TRS.

CPI had won in Munugode five times in the past.

The bypoll in Munugode was necessitated by the resignation of sitting Congress MLA Komatireddy Raj Gopal Reddy who had joined BJP. His re-election bid on the BJP ticket was unsuccessful.

For Congress, the Munugode bypoll is a major setback as its hopes to at least stand as the runner-up were dashed.

The Nalgonda district, where Munugode falls, has been a Congress stronghold. The grand old party won the two Lok Sabha seats of Nalgonda and Bhongir in the 2019 elections.

The Congress is on the decline in states where the regional parties are on the ascent and lack of unity among leaders and the “aggressive politics” of BJP are among the factors that led to the waning popularity of Congress, Ravi said.