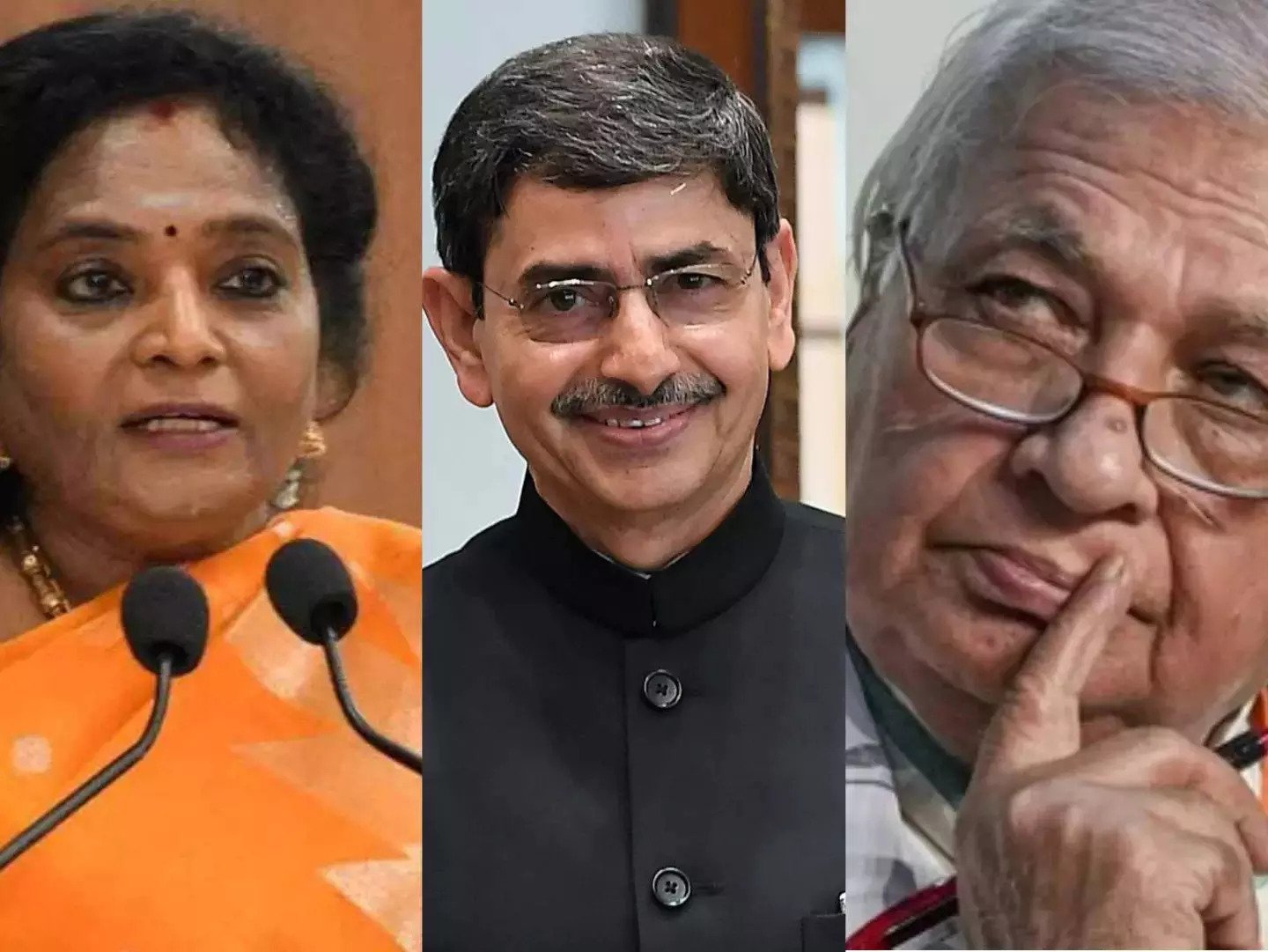 CHENNAI/HYDERABAD/ THIRUVANANTHAPURAM: Friction between Governors and the ruling dispensation in three non-BJP ruled southern states escalated on Wednesday, with Tamil Nadu seeking a recall of R N Ravi, Kerala proposing the ordinance route to replace Arif Mohammed Khan as Chancellor of state varsities, and Tamilisai Soundararajan expressing doubts of her phone being tapped in Telangana.

While the Telangana Governor also claimed of an “undemocratic” situation in TRS-ruled Telangana, ruling DMK and its allies told President Droupadi Murmu that Ravi’s acts were unbecoming of those in the gubernatorial post and sought his sacking.

The ruling LDF in Kerala, which has had a number of run-ins with Governor Khan, said it has decided to come out with an ordinance to replace the Governor as Chancellor of universities in the state and appoint eminent academicians to that post, a move opposed by both the Congress and the BJP.

The Kerala cabinet, which met in Thiruvananthapuram, decided to recommend to Khan to promulgate the ordinance which would amend the University Laws regarding appointment of chancellor by removing the section which states the Governor shall also be at the helm of 14 varsities in the state, a statement from the Chief Minister’s Office (CMO) said.

It further said that in the meeting, the cabinet also considered the recommendations of the Punchhi Commission, headed by former Chief Justice of India Madan Mohan Punchhi, that it would not be appropriate to appoint the Governor as the head of the universities as he has other duties too under the Constitution.

Kerala Higher Education Minister R Bindu said the government has taken the decision to replace the Governor with eminent academicians as chancellors for bringing long-term reforms in higher education and universities in the state.

On queries whether Khan would sign the ordinance, the minister said she hopes that he would act according to his constitutional duties.

As regards Tamil Nadu, the ruling DMK-led Secular Progressive Alliance (SPA) knocked on the door of Rashtrapati Bhavan with a plea seeking Governor Ravi’s sacking, alleging, among others that he “instigated communal hatred”.

The petition, signed by the alliance’s Members of Parliament and submitted with the President’s office, also listed out the pending Bills with Raj Bhavan, including one seeking exemption to the state from the ambit of NEET medical exam and questioned the delay for the assent.

Ravi and the M K Stalin-led government have been at loggerheads over a number of issues, including the NEET, and his recent remarks over the ‘delay’ in handing over the probe into the October 23 Coimbatore car explosion to the National Investigation Agency (NIA) by the state government has not gone down well with the ruling dispensation.

Ravi was “unabashedly propagating dangerous, divisive, religious rhetoric in public, which is unbecoming of a Governor. His speeches are made with a calculated intent to incite hatred and create communal unrest among the people. Recently, he made a comment that “India is dependent on one religion like the rest of the world”. This statement is an affront to India’s Constitution. India is dependent on its Constitution & laws, not any religion,” the memorandum said.

In the past, he has made similar “communal remarks like praising sanatana dharma, communalising the jewel of Tamil literature the Thirukural (a classical collection of couplets on various aspects of life) & denouncing Dravidian heritage and Tamil pride. These statements have caused deep wounds to the Tamil sentiment and pride,” the petition claimed.

Holding that the mind of a Governor should be free of any political likes or dislikes or party politics or expectations of future appointments after their tenure expires, they said his/her attention should be towards the welfare of the people and must defer to the decisions of the elected representatives — the Chief Minster and the Council of Ministers.

“Ravi forgets that he has not won any elections in Tamil Nadu to decide what is good for the people of Tamil Nadu.”

“Clearly, Thiru (Mr) R N Ravi has violated the oath he took under Article 159 to preserve, protect and defend the Constitution and the law and to devote himself to the service and well-being of the people of Tamil Nadu. Far from it, he has been instigating communal hatred, and is a threat to the peace and tranquility of the State…therefore by his conduct and actions, Thiru R N Ravi has proved that he is unfit to hold the constitutional office of Governor and therefore he deserves to be sacked immediately,” the MPs said in the nine-page memorandum.

Telangana Governor Soundararajan, who had in the past complained of protocol non-compliances during her visits, raised doubts of her phones being tapped.

“I doubt (that) my phones are tapped. Undemocratic situation is there in the state, particularly in respecting the Governor. I want to clarify all those things,” she said at a press conference.

She refused to elaborate saying there were some social media posts linking Raj Bhavan with the recent “TRS MLAs poaching case”.