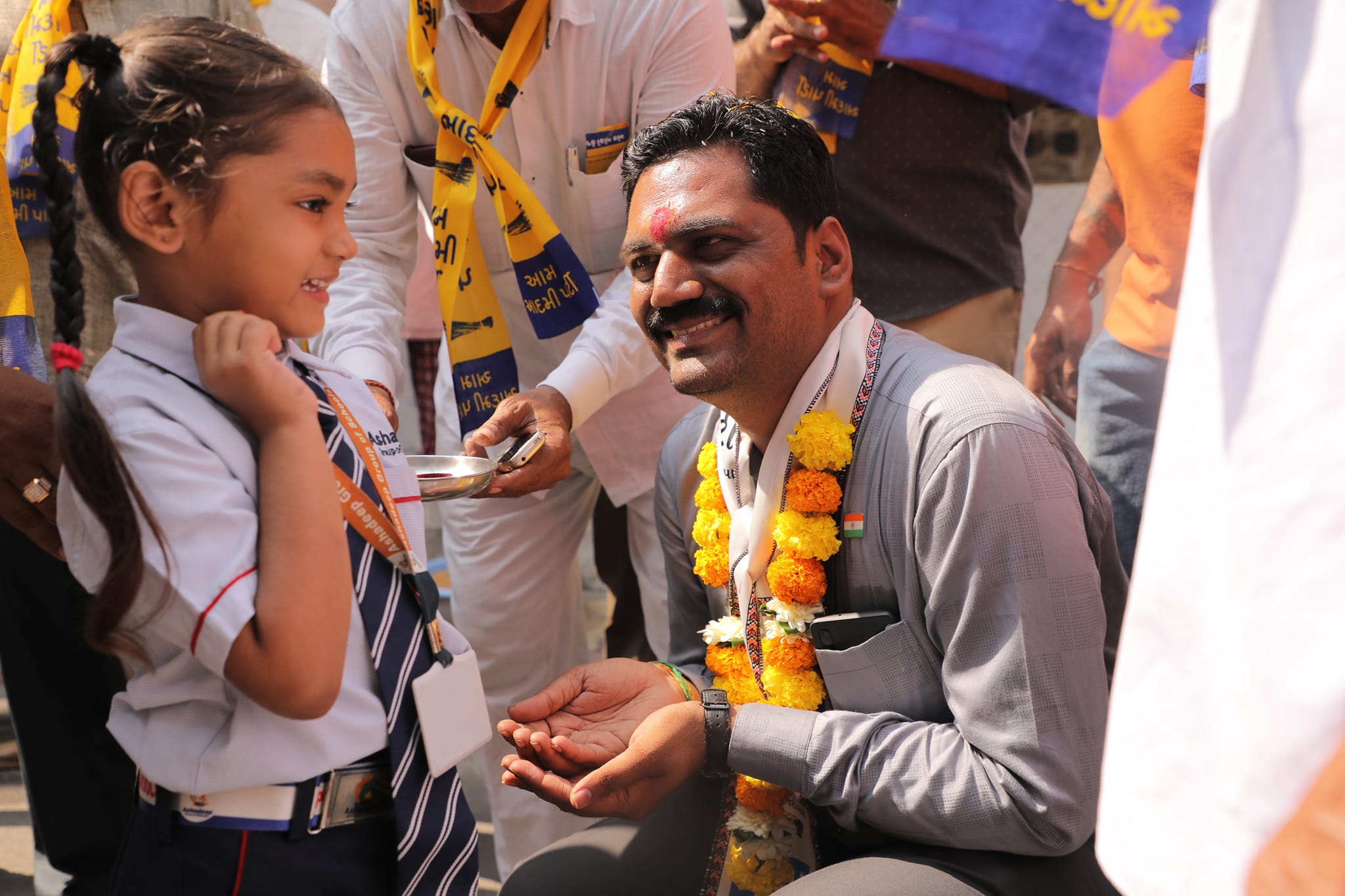 VARACHHA (SURAT): “The ‘Babbar Sher’ (lion) has come, now no one else stands a chance here,” said a youngster as Alpesh Kathiriya, AAP candidate from the Varachha Road Assembly constituency, arrived at a residential colony here on a motorcycle with his supporters in tow.

Kathiriya along with his supporters went from door to door chanting ‘Bharat Mata ki Jai’ and urging residents, many of whom came out of their houses after seeing his cavalcade, to vote for him in the upcoming state polls.

“We are with you,” an elderly woman assured 28-year-old Kathiriya, who was a prominent leader of the 2015 Patidar quota agitation in Gujarat and earned the sobriquet ‘Babbar Sher’ for his aggressive and uncompromising stand on the issue.

Kathiriya told PTI that the BJP has betrayed the Patidar community, which was once a staunch supporter of the saffron party.

“During the 2017 Assembly polls, they (BJP) had promised that they would withdraw all cases filed against us but did not do so after returning to power. They betrayed us.

“Over 1,000 youths are still facing cases and keep appearing in one court after another as the cases were filed under various police station areas,” said Kathiriya, who has 20 cases, including two of sedition, lodged against him.

The BJP has not only betrayed the Patidar community but also the people of Gujarat with its fake promises, he charged.

The people of Gujarat are bearing the brunt of the price rise and unemployment but the BJP’s “corrupt” government remains indifferent to their plight, he added.

The BJP-led state government’s action against Patidar youths in 2015 turned many against the party. As many as 14 Patidar youths were killed in police action during the agitation and PAAS leaders were slapped with several cases.

Kathiriya rose into prominence among the youth of his community after Hardik Patel, who spearheaded the Patidar quota agitation and was a vocal critic of the BJP, joined the ruling party in Gujarat in June this year.

Kathiriya, who joined AAP last month, took over as the convenor of the Patidar Anamat Andolan Samiti (PAAS) after Patel joined the Congress in 2019.

PAAS had organised agitations across Gujarat demanding Other Backward Class (OBC) status and reservation in government jobs and educational institutions for the youth of the Patidar community.

“People are fed up with the BJP regime and want a change. Seeing the current scenario, I felt that I must enter active politics to bring a change and I decided to join the Aam Aadmi Party as it practices politics of honesty and work. It does what it says,” Kathiriya said.

“If the AAP is voted to power, our party’s government will withdraw all the cases lodged against those who took part in the 2015 quota stir. It will also fulfil all the promises made to the public,” he asserted.

The AAP has promised to provide free electricity up to 300 units, healthcare facilities and a monthly allowance of Rs 1,000 to every woman aged above 18, among other things, if it is voted to power in Gujarat.

The Varachha Road Assembly segment is dominated by Patidars. Members of the community constitute almost 70 per cent of the 2.19 lakh voters in the constituency.

However, some locals feel that the numbers alone cannot guarantee Kathiriya’s victory.

“Alpesh is very popular here, especially among the youngsters, because of his selfless work and dynamism. He is always available for those in need. But he will not get the full support of the community,” Praful Patel, a Patidar and a textile businessman, told PTI.

He will put up a tough fight but eventually the BJP will win as its government has done “a lot of work” in Surat, he said.

“The Congress is nowhere in this constituency. It’s a BJP stronghold,” he added.

Patel admits that the AAP’s pre-poll promises have caught the fancy of many voters.

“Many think that free healthcare services will help them save money, especially when it comes to providing treatment to the elders in their families,” he said.

Polling in Varachha will be held in the first phase of the Gujarat Assembly elections on December 1.

In this article:AAP, BJP, Gujarat, Patidars