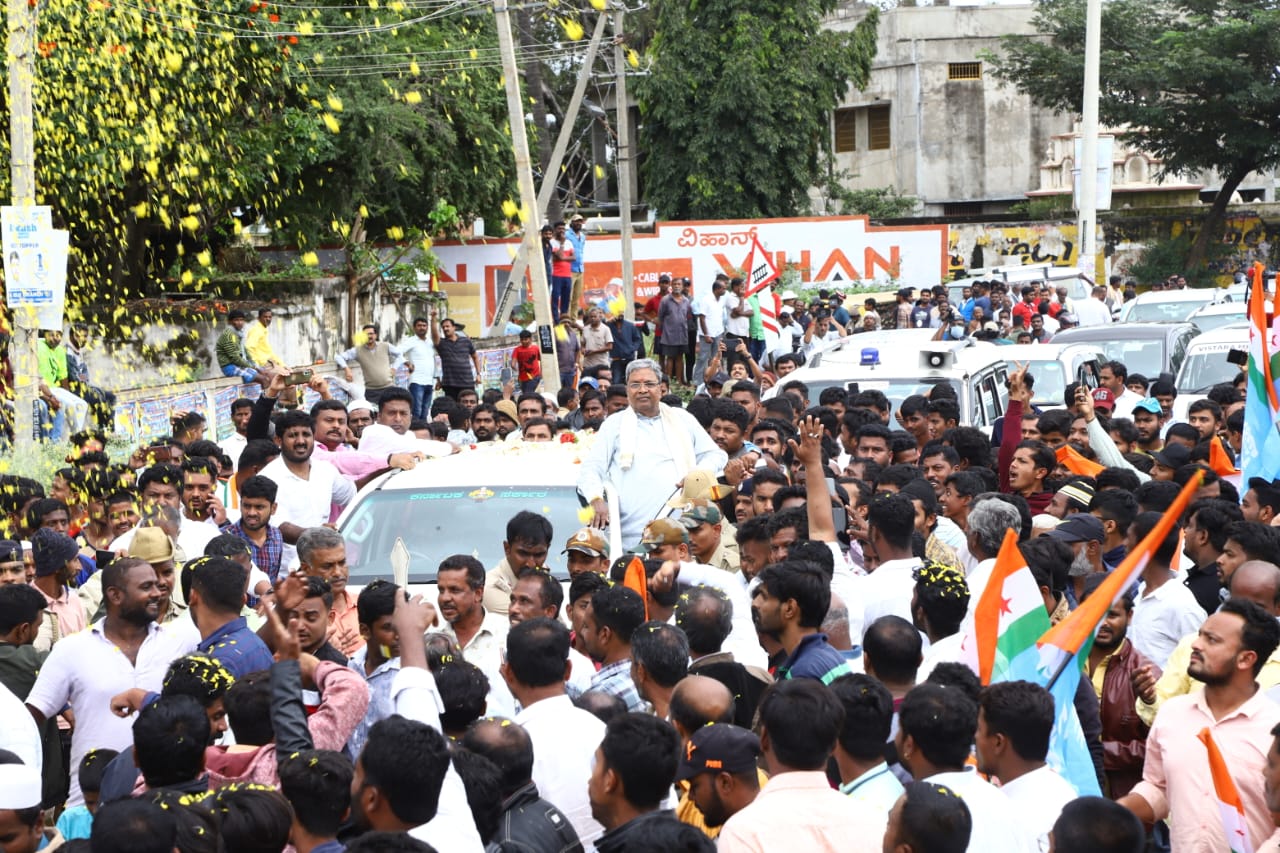 KOLAR: Senior Congress leader Siddaramaiah’s visit to Kolar on Sunday, and his cryptic statement about coming back to the constituency during the filing of nomination, has led to speculations that he may contest the 2023 assembly polls from here.

Congress leaders and workers from Kolar have been pressurising the Congress Legislature Party leader to contest from there.

Siddaramaiah, who currently represents Badami segment of Bagalkote district in northern parts of the state, has indicated that he may not contest from there, citing his inability to give more time for people and party workers of the constituency as the reason, and is yet to choose the seat from where he will contest next.

The former Chief Minister who arrived in Kolar by a bus, specially designed for election campaign, was accorded a rousing welcome by party leaders and workers of the district.

He later visited a Kolaramma temple (deity of Kolar), a church and a Dargah and offered prayers. He also paid floral tributes to statues of freedom fighters and luminaries like Maharshi Valmiki, Sarvagna, Sangolli Rayanna, Mahatma Gandhi and B R Ambedkar here.

Addressing the people and party workers gathered to greet him, Siddaramaiah said, ”….My namaskaras to all brothers and sisters and people who have come here. I will come back during the filing of nomination.” This cryptic remark by the Leader of Opposition in Karnataka assembly was greeted with a loud cheers and applause by people and leaders present with him.

Later, when reporters questioned him about his nomination remarks, Siddaramaiah said, ”no not yet…still the election is not declared, then comes nomination. I only said while filing nomination I will come once again.” Asked whether he was speaking about his own nomination, he said, ”I don’t know….” Earlier in the day, Siddaramaiah told media that he is under pressure to contest from four to five constituencies — Badami, Varuna, Hebbal among others, but pressure is more from Kolar, and ultimately after analysing, whatever party decides, he will abide by it.

”Party leaders and workers are putting pressure on me to contest from Kolar, as Srinivasa Gowda (sitting MLA from JDS) who has switched sides to Congress will not be contesting polls, and with no Congress candidate from the seat, they want me to contest from there,” he said.

Senior Congress MLA and former Minister Krishna Byre Gowda said, party leaders, workers and people of the Kolar constituency have been requesting Siddaramaiah for about a year now that he has to contest polls from here.

He said, ”He (Siddaramaiah) has thought about it and ultimately the final decision is left to him and the party leadership. We requested him to at least visit the constituency, meet the people and understand the pulse here, so he is visiting.” Congress functionaries hope that Siddaramaiah contesting from Kolar will help the party prospects in the districts of Kolar, Chikkaballapura and Bengaluru Rural, and recalled his work in ensuring water supply for the drought affected region by initiating Yettinahole Project, and filling up tanks with KC Valley and HN Valley projects will help.

According to party sources, Kolar is a safe bet for Siddaramaiah as it will consolidate AHINDA votes in his favour and Vokkaliga leaders of the party from the region also may pledge support to him.

They said, Siddaramaiah’s supporters have conducted surveys and have concluded that the seat can ensure a comfortable win for the ”Kuruba” leader, and Kolar being close to Bengaluru city it may be easy for him to ensure his presence there often.

The party insiders however feel that factional rift in the Kolar Congress, especially Union Minister K H Muniyappa, a veteran leader sulking, may cause a bit of worry for Siddaramaiah to some extent.

Muniyappa is upset with senior MLA and former Speaker Ramesh Kumar’s (a Siddaramaiah’s loyalist) growing prominence in the Kolar unit and certain developments there.

”Siddaramaiah doesn’t work taking people into confidence wherever he goes, so he changes seats every time. I want to tell people of Kolar, enquire about him in Chamundeshwari and Badami and I request them to defeat and send him home,” Union Minister Pralhad Joshi said.

Siddaramaiah, who has announced that 2023 assembly polls will be his last, has made it clear that he would not contest from Chamundeshwari. As the then sitting chief minister, he lost the 2018 polls in Chamundeshwari to JD(S) G T Deve Gowda by 36,042 votes.

He, however, won Badami, the other constituency from where he had contested and defeated B Sriramulu (BJP) by 1,696 votes.

Making his debut in the Assembly in 1983, Siddaramaiah had got elected from Chamundeshwari on a Lok Dal Party ticket. He has won five times from this constituency and tasted defeat thrice.

After neighbouring Varuna became a constituency in 2008 following delimitation, Siddaramaiah represented it till he vacated the seat for his son Dr Yatindra (MLA) in the 2018 assembly polls and went back to his old constituency of Camundeshwari.

It is no secret that Siddaramaiah, who was chief minister between 2013-2018, is nursing his ambition for a second term in office, if the party wins the next assembly polls.

With State Congress President D K Shivakumar too having similar aspirations, it has triggered a game of one-upmanship between the two leaders.