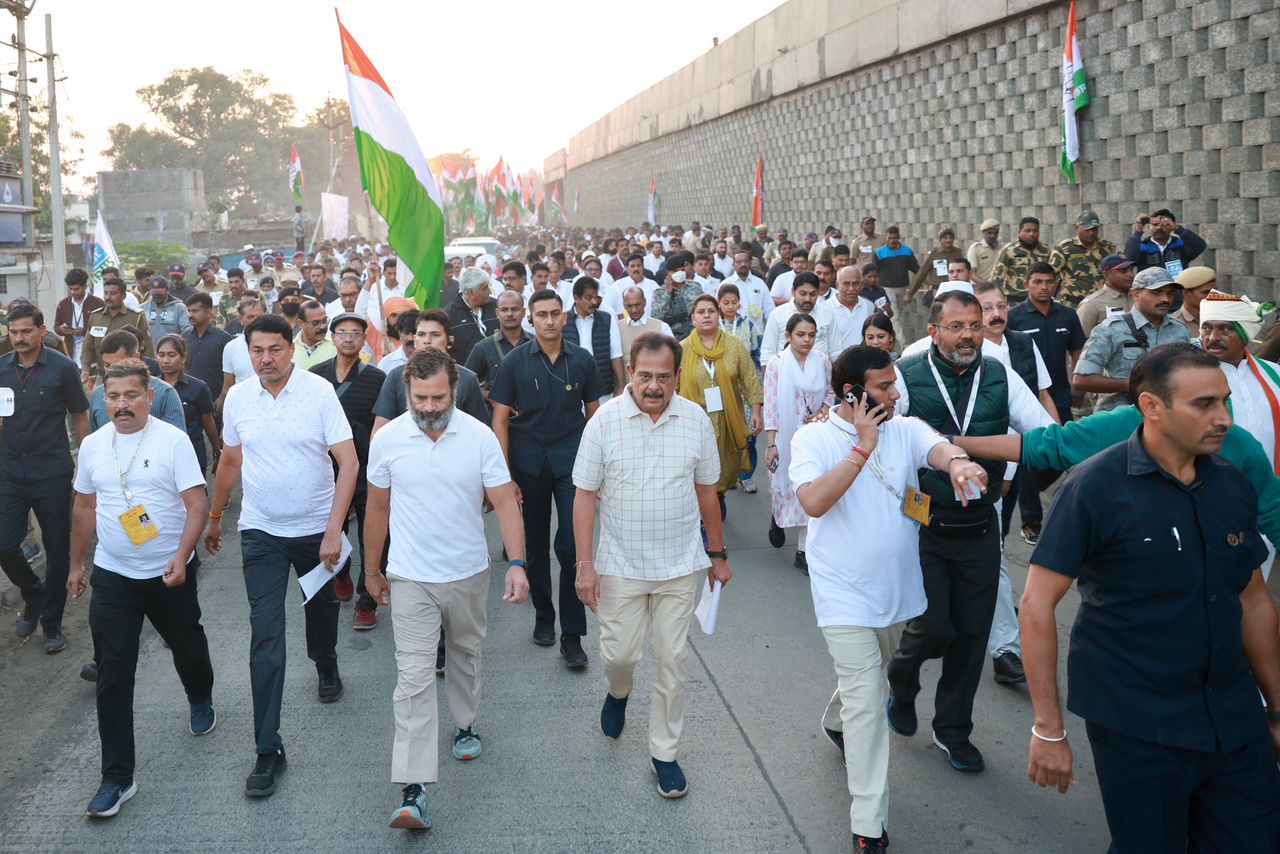 WASHIM (MAHARASHTRA): Stepping up his attack on the Centre and the ruling Bharatiya Janata Party (BJP), Congress leader Rahul Gandhi on Wednesday alleged their policies have destroyed the Indian economy and broken the back of farmers.

He said small and medium business enterprises, and not big industrial houses, generate large-scale employment, but they were at the receiving end of the Centre’s 2016 note-ban exercise and the way Goods and Services Tax (GST) was implemented in 2017.

LIVE: Maharashtra leg of the #BharatJodoYatra resumes from Washim. https://t.co/cCVzmLe7Y8

“GST, demonetisation, the farm laws were not just policies but weapons to destroy small and medium businesses and farmers. When the (three) farm laws were enacted in 2020 (they were repealed in 2021), farmers in Haryana and Punjab came out strongly against them. Top industrial houses don’t give employment… small and medium traders give employment,” said the Lok Sabha MP from Kerala.

Gandhi was speaking at a meeting in Medshi in Washim district at the end of the 10th day of the Maharashtra leg of his 3,570-km-long Bharat Jodo Yatra. The Congress’s cross-country foot-march, which started on September 7 from Kanniyakumari in Tamil Nadu, completed 70 days on Wednesday.

He said Chhatrapati Shivaji Maharaj, B R Ambedkar, Mahatma Phule and Shahu Maharaj were national icons who taught brotherhood and unity to people and his Bharat Jodo Yatra’s objective was to take forward their ideals.

Gandhi said there is no violence or hatred in the yatra.

Our resolve to spread love and unite the nation will keep us moving forward.#BharatJodoYatra pic.twitter.com/p6jmKwj6nh

“If people get hurt, the yatris (foot-march participants) don’t leave them behind and move ahead. Everyone together lifts the fallen person and walk together,” he said. ”This doesn’t happen in Delhi (referring to BJP rule at the Centre) or in Maharashtra,” the Congress MP said in an apparent jibe at Chief Minister Eknath Shinde who revolted against the Shiv Sena leadership, resulting in collapse of the Maha Vikas Aghadi (MVA) government in June.

The Congress was a constituent of the Shiv Sena-led MVA government.

Policies being pursued by the BJP and the Centre have adversely affected farmers and destroyed social fabric of the country, he claimed. “If violence and hatred is spread, how can the country remain strong and united?” Gandhi asked.

Farmers do not get remunerative price of their produce or adequate crop insurance money, leading to losses to them, said the Congress leader.

If there is good harvest of crops, the government will suddenly change its export-import policies due to which prices of agriculture commodities fall, thereby affecting cultivators, Gandhi said.

“How can those who hurt farmers, who feed the country, can be called patriots?” asked the Member of Parliament.

He also attacked the Centre over the ‘Agnipath’ recruitment scheme for the armed forces.

“Youths join military to serve the country, but under the new scheme the government wants them to join the defence forces on a short-term basis and then remain unemployed through their life,” said Gandhi.

Under Agnipath, youths will be inducted into the armed forces for a four-year tenure, while 25 per cent of them will be subsequently inducted for regular service.