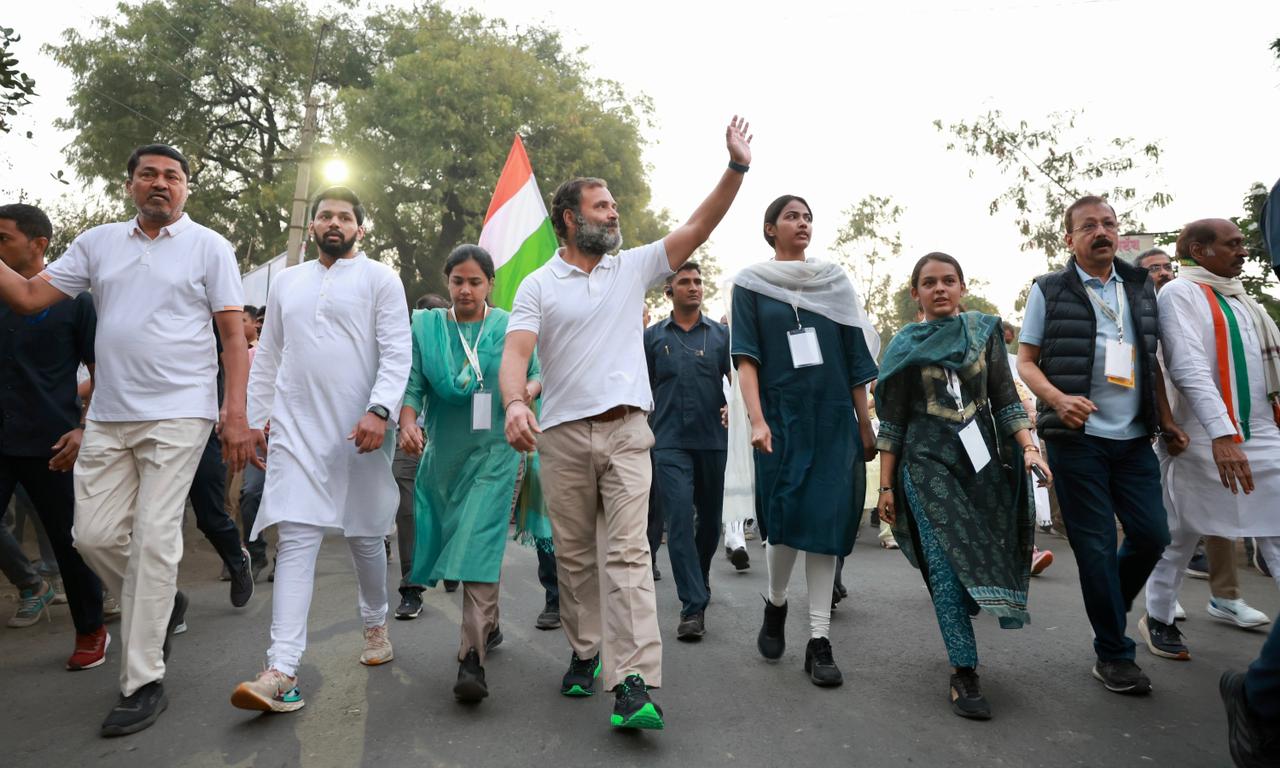 AKOLA: Unfazed by the controversy over his recent remarks against V D Savarkar, Congress leader Rahul Gandhi on Thursday again targeted the late Hindutva ideologue, claiming that he helped the British rulers and wrote a mercy petition to them out of fear.

Gandhi also dared the Maharashtra government to stop the Congress’s Bharat Jodo Yatra, which is currently passing through the state. His statement comes in the wake of a few leaders from the ruling parties in the state demanding that the yatra be stopped in the state in view of his remarks against Savarkar. Addressing a press conference at Wadegaon in Akola district, Gandhi showed documents dating back to 1920 to media persons, claiming that they contained a letter written by Savarkar to the British.

”I will read the last line, which says ‘I beg to remain your most obedient servant’ and is signed V D Savarkar, which shows he helped the British,” Gandhi said at the media interaction during his Bharat Jodo Yatra that is in the last leg in Maharashtra.

He said he was of the view that Savarkar signed the letter out of fear and in doing so, he betrayed Mahatma Gandhi, Sardar Patel, Jawaharlal Nehru and other leaders of the freedom struggle.

Gandhi, Nehru, Patel remained in jail for years, but none of them signed any such letter, he said.

”A copy of this (Savarkar’s) letter should be sent to Rashtriya Swayamsevak Sangh (RSS) chief Mohan Bhagwat. If (BJP leader) Devendra Fadnavis wants to see it, he can also see,” Gandhi added. On Tuesday, while addressing a rally in Washim district as part of the yatra, Gandhi had called Savarkar a symbol of the Bharatiya Janata Party (BJP) and the RSS. ”He was jailed in Andaman for two-three years. He started writing mercy petitions,” the Congress MP had said.

Soon after that, former Maharashtra chief minister Uddhav Thackeray, whose Shiv Sena faction is in alliance with the Congress, had said he does not agree with Gandhi’s views on Savarkar. Maharashtra Deputy Chief Minister Devendra Fadnavis also claimed that Gandhi has been ”shamelessly lying” about Savarkar.

Lok Sabha member Rahul Shewale, who belongs to the Shiv Sena faction led by Chief Minister Eknath Shinde, had on Wednesday slammed Gandhi for his remarks and demanded that the Bharat Jodo Yatra be stopped in the state.

During the media interaction on Thursday, Gandhi dared the state government, saying, ”If it wants to stop the yatra, try and stop.” He also accused the BJP of spreading hatred, fear and violence.

”BJP doesn’t speak to farmers and youth…If people felt that this yatra was not needed, lakhs of people would not have come out on the streets in support,” he said.

”The yatra has been a learning experience for me and helping me understand people,” he added.

We won't let the divisive forces cast a dark shadow over our future.#BharatJodoYatra pic.twitter.com/5B2hIm77gE

”This is not a battle between two political parties. Institutions in the country create fairness on the battleground. If you go on the ground, you will understand what the people say,” he said.

Showing compassion and affection even to your opponents are Indian values. The yatra is doing the same. You can disagree with the views of your opponent by showing affection and love, he added.

To a question on the Congress and opposition leaders ”betraying the ideology” to join the BJP before elections, Gandhi said this will cleanse the opposition.

Those who can sell themselves for money are joining BJP. There are clean people around and they will come to Congress, he said.

”I met a Shiv Sena MLA, who said he was offered Rs 50 crore to defect, but he didn’t do so. In a way, the opposition is being cleaned up…All corrupt people who can sell themselves for money are going to the BJP. There is no dearth of clean people who will come to the Congress,” he said.

Asked if he is the Congress’ prime ministerial candidate for 2024 elections, Gandhi said such questions are meant to deflect attention from the yatra. ”I am not even thinking of this,” he said.

The yatra was conceptualised because India was internally fractured and in pain, the Congress leader added.

”The party is not weak in Maharashtra. There is a natural Congress in Maharashtra. The state is in the party’s DNA. There will be a positive impact of the yatra in Congress…I am not a soothsayer. I cannot predict the future,” he said.

Little bit of love, respect and affection will strengthen India, he said.

”I don’t understand why people think hatred, being abusive, nasty and cruel will make the country strong. I think it is cowardice. Being compassionate and respectful to your opponent is what Mahatma Gandhi taught and these are Indian values which are powerful,” he said.

Gandhi recalled that when he asked Nelson Mandela what gave him hope after remaining in jail for 26 years, he said India’s freedom struggle inspired him.

He said the yatra was an idea, imagination against the BJP’s approach, which is full of hatred and spreading fear.

”The yatra’s attempt is to tell people this is not the approach. Some BJP leader said the yatra should be stopped. I didn’t say how dare he or he should be crushed and beaten. I said this is his view. Let him keep his view. If the government thinks the yatra is causing a bad impact on the country, it can do so,” he said.

Speaking about his experience in Maharashtra during the yatra, he said he met lakhs of people where youths shared their aspirations and farmers shared their pain.

”I was taught about Shivaji Maharaj, Mahatma Phule, Dr Babasaheb Ambedkar. My political understanding of Maharashtra has changed. I will never forget this,” he said. He said he realised during the yatra in the state that unemployment and farmers’ problems were two key issues.