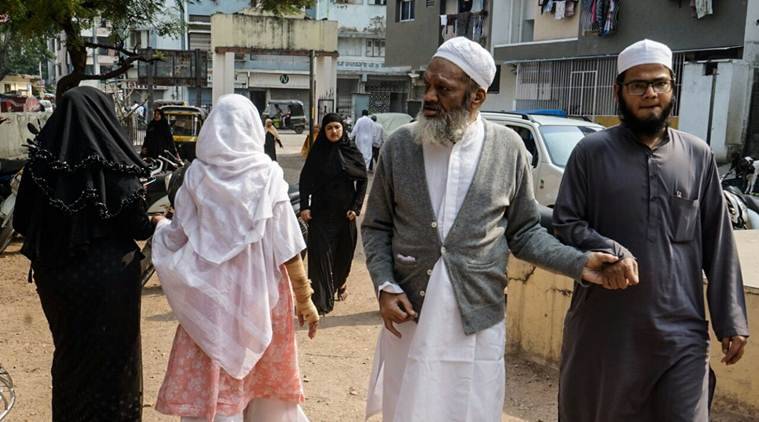 AHMEDABAD: The Aam Aadmi Party (AAP) and the Asaduddin Owaisi-led AIMIM seem to have dented the Congress’s sway over votes of minorities in Gujarat in the Assembly polls, bringing down the main Opposition party’s vote margin considerably in various seats across the state.

The minorities, primarily Muslims, have been loyal voters of the Congress for the last several decades, especially after the 2002 post-Godhra riots.

According to Congress sources, the Bharatiya Janata Party (BJP), on most occasions post the 2002 riots, has made electoral calculations keeping in mind consolidation of Hindu votes irrespective of castes.

This prompted the main Opposition party to secure its minority votes, one of the last components of the Congress’s old strategy of KHAM (Kshatriya, Harijan, Adivasi and Muslim) social engineering, which once used to be its winning formula in the state, they said.

However, the entry of the AAP and the Hyderabad-headquartered All India Majlis-E-Ittehadul Muslimeen (AIMIM) has not only disturbed Congress’s minority vote bank but has also helped the ruling BJP, which did not field a single Muslim candidate in the elections, at the cost of the Congress.

In the 2022 Assembly polls, traditional political parties fielded very few Muslim candidates in Gujarat, which has a 182-member Assembly. The Congress had fielded six Muslim candidates, while the Arvind Kejriwal-led AAP gave tickets to three members of the minority community.

The AIMIM contested 13 Assembly seats and fielded Muslim nominees on 12 of them.

The AIMIM might have failed to win a single seat and the AAP might have won just five, but they derailed the Congress’s prospects and vote share in numerous seats by splitting their traditional votes.

In the minority dominated Dariapur seat, considered a Congress bastion, sitting Congress MLA Gyasuddin Shaikh lost to BJP’s Kaushik Jain by a margin of 5,243 votes. Shaikh polled 55,847 votes, whereas his nearest BJP rival bagged 61,090 ballots. The winning difference was made by AAP and AIMIM candidates, who polled 4,164 and 1,771 votes, respectively.

In Jamalpur-Khadia, the Congress’s Imran Khedawala got a third consecutive term, but with a reduced mandate of 58,487 votes, down from 75,000 in 2017. AIMIM’s state president Sabir Kabliwala bagged 15,677 votes and the AAP 5,887 in the constituency in Ahmedabad district.

In the Bapunagar seat, sitting Congress MLA Himmatsinh Patel lost to BJP’s Dineshsinh Kushwaha by a margin of 12,070 votes. AAP and Samajwadi Party’s (SP) Muslim candidates made the difference in margin between the Congress and the BJP. The AAP and the SP polled 6,384 and 3,671 votes, respectively.

In the Mangrol seat, two-time sitting Congress MLA Babubhai Vaja lost to BJP’s Kargatiya Lakhabhai by 22,501 votes. The AAP and the AIMIM polled 34,314 and 10,789 votes, respectively, thus contributing to the defeat of the grand old party in the Assembly segment in Junagadh district.

The Congress won the Muslim and Dalit-dominated Danilimda Assembly segment in Ahmedabad, despite the AAP and the AIMIM cutting into its votes and the BJP putting up a strong fight. Sitting Congress MLA Shailesh Parmar won by defeating his nearest rival, BJP’s Nareshbhai Vyas, by a margin of 13,525 votes.

BJP MLA Sangita Patil registered a third straight win in Surat’s Marathi and Muslim-dominated Limbayat constituency. She defeated her nearest rival, Aam Aadmi Party’s Pankaj Tayede, by a margin of 58,009 votes. The AAP elbowed out the Congress, the traditional main Opposition in this seat, to a distant third position.

Patil polled 95,696 votes as compared to 37,687 votes in favour of Tayede. Congress candidate Gopalbhai Patil finished third with 29,436, whereas the AIMIM was a distant fourth with 5,216 votes.

The Vejalpur seat in Ahmedabad district, which includes large Muslim ghetto of Juhapura, has a 35 per cent vote share of the minority community.

According to political analysts, the voting pattern in Muslim-dominated seats shows minorities have shifted loyalties as the Congress has failed to emerge as an alternative to the BJP.

”The Congress’s silent campaign was a complete flop show as it failed to put up an alternative, and just like any common voters, a large section of minorities appeared to have switched to the AAP. The Congress lacked the momentum in the entire election,” political analyst Hemant Shah said.

Echoing him, political analyst Dilip Gohil maintained the poll results reflect voters yearning for an alternative have found the AAP as a replacement of the Congress.

”Be it minorities or the commoner, they were looking for an alternative, and they have found it in the AAP. The problem for the Congress is they might have secured the distant second position, but they have lost the perception battle to the AAP. And this would prove politically fatal for the Congress as they would find it hard to revive themselves,” he said.