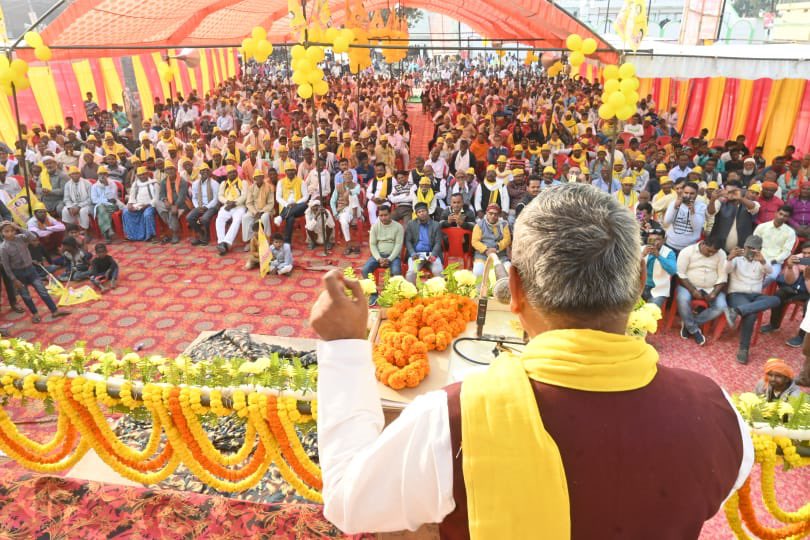 ”Mulayam Singh Yadav had contested the last Lok Sabha election in Mainpuri as part of the SP-BSP alliance and won by a margin of about 95,000 votes. Dimple Yadav won the seat by a margin of 2.5 lakh votes, so it is clear that a sympathy wave has contributed to her huge victory,” Rajbhar told news persons on the sidelines of an event here.

”The coming together with PSPL will not benefit the Samajwadi Party in any way (in the 2024 Lok Sabha polls). Akhilesh Yadav and Shivpal Singh Yadav had contested the assembly polls earlier this year together. Both the leaders have already been together,” he further said.

On Thursday, SP chief Akhilesh Yadav presented his party’s flag to PSPL founder and his uncle Shivpal Singh Yadav in Saifai. He declared that ”respected chachaji (Shivpal Singh Yadav) and his party (PSPL) have come together with the SP and now, all will work together under one flag”.

Dimple Yadav won the bypoll to the Mainpuri parliamentary seat, defeating her nearest rival BJP candidate Raghuraj Singh Shakya by a margin of over 2,88,461 votes.

Rajbhar said the Muslim community in Mainpuri supported the SP. ”But in the Rampur, the Yadavs voted in favour of the BJP. Because of this, a non-Muslim MLA has been elected for the first time in Rampur,” he claimed.

The BJP won the Rampur Sadar assembly seat for the first time as its candidate Akash Saxena defeated his nearest SP rival Asim Raja by a margin of 33,702 votes.