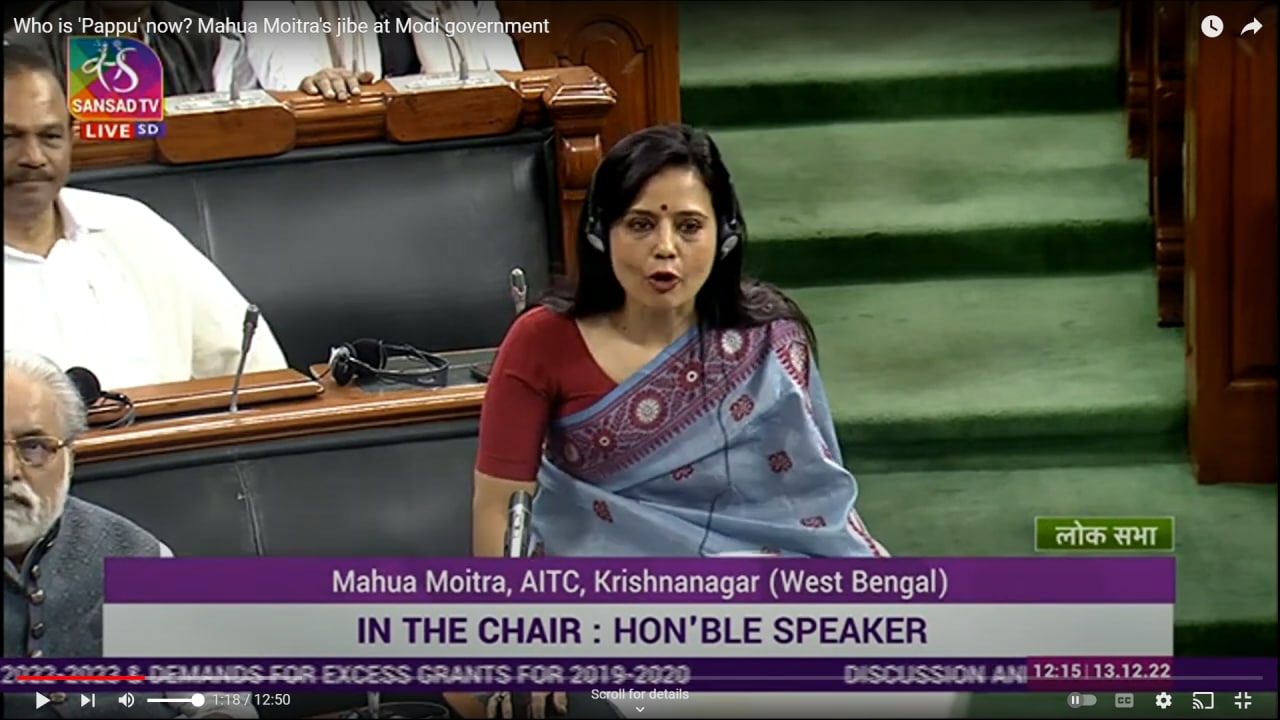 NEW DELHI: Trinamool Congress MP Mahua Moitra on Tuesday cited government data showing industrial contraction to question the Centre’s handling of the economy and asked ”who is the ‘Pappu’ now?” Participating in a debate in Lok Sabha on demands for additional grants for 2022-23, the firebrand TMC leader said, ”This government and the ruling party coined the term Pappu. You use it to denigrate and signify extreme incompetence. But the statistics tell us who the actual Pappu is.”

Moitra accused the Narendra Modi government (Central; government) of spreading ”falsehood” about India’s growth and appealed to Finance Minister Nirmala Sitharaman to take control of the economy, which, according to the TMC leader, is going downhill.

Referring to the latest data released by the National Statistical Office (NSO), Moitra claimed that while the country’s industrial output shrunk by four per cent in October to a 26-month low, the manufacturing sector, which is ”still the biggest generator of jobs”, contracted by 5.6 per cent.

”Seventeen of the industry sectors that make up the Index of Industrial Production (IIP) have recorded negative growth. Forex reserves have fallen by 72 billion dollars in under a year,” she said.

The manufacturing sector’s output declined by 5.6 per cent in October 2022 as against a growth of 3.3 per cent recorded in the year-ago month, according to the IIP data released by the NSO.

She also took a swipe at the BJP over its defeat in the just-concluded Himachal Pradesh assembly elections, saying the ruling party’s president could not hold on to his home state. ”Who is the Pappu now?” she asked.

Himachal Pradesh is the home state of BJP national president JP Nadda and in the elections, the Congress wrested the state from his party.

Finance Minister Nirmala Sitharaman on Monday mentioned during the Question Hour how 50 per cent of Foreign Institutional Investors inflows into emerging markets are coming to India, but the government in reply to a question told the House last Friday that almost 2 lakh people renounced their Indian citizenship in the first 10 months of 2022, Moitra said.

”This exodus of 2022 takes the total number of Indians renouncing Indian citizenship under this government in the past nine years since 2014 to over 12.5 lakh people,” she said.

”Is this sign of a healthy economic environment or a healthy tax environment (in the country)?” she asked, adding, ”Who is the Pappu now?” The TMC member alleged that there is an ”atmosphere of terror” in the country with the ”sword” of the Enforcement Directorate hanging over ”businessmen and high-net-worth individuals” as well as leaders of opposition parties.

”The ruling party buys lawmakers for hundreds of crores of rupees and yet members of the opposition represent 95 per cent of the lawmakers under investigation by the Enforcement Directorate,” Moitra alleged.

She accused the government of spreading falsehood over India’s growth story under Prime Minister Modi and said demonetisation of high-value currency enforced by it in 2016 had failed to achieve its targets as cash is ”still king” and phasing out of fake currency is still a distant dream.

”This government has us believe every February that this country’s economy is going great guns, we are the fastest growing most efficient global player, everyone is getting employment, cylinders, electricity and pucca houses. This falsehood flies for eight to 10 months and the truth comes out limping after it,” The TMC leader said.

”We are now in December and the government says it needs another 3.26 lakh crores as additional funds over and above the budget estimates,” she said.

Reacting to the TMC member’s ‘Pappu’ remark, BJP member Jagdambika Pal made certain observations, which Rajendra Agarwal, who was in the Chair, said will not go on record.

Participating in the debate, Pal defended the government and said India under Prime Minister Modi is among the top five global economy “If at all anyone could control inflation, it’s the Narendra Modi government,” he said.

He said India’s exports under the leadership of PM Modi are increasing day by day and the country is on its way to achieving its target of becoming a five trillion economy.

“We will come again in 2024 (after winning Lok Sabha elections) and talk about coming at the top of the world,” the BJP MP added.

NCP member Supriya Sule asked if the government has a roadmap on how to improve the economic condition of the country.

She said schemes such as Rashtriya Vayoshri Yojana were not being implemented for lack of funds.

The government kept on talking about the robust economy at a time when India’s industrial growth was stagnating and unemployment was at an all-time high, she said.

“I want to ask the government, does it have a roadmap on how to improve the economic condition of the country,” Sule said.

National Conference member Hasnain Masoodi said the economic condition of farmers was a matter of concern.

“One lakh workers are waiting for their wages. Apple which is the spine of Kashmir is also struggling. Saffron production has registered a 20 per cent fall due to pollution,” he said.

RSP member N K Premachandran said the demand for excess grants to the tune of 10 per cent of the amount of the total budget proposal reflected poor fiscal planning of the government.

Premachandran wondered how the government would contain the fiscal deficit at 6.4 per cent of the GDP as announced by Finance Minister Nirmala Sitharaman in her budget speech.

“What is the sanctity of the budget proposals when the government seeks supplementary demands for grants amounting to 10 per cent of the budgetary proposals within two quarters of the financial year,” Premachandran said.

Congress member Mohammad Javed said India was importing 90 per cent of its fertiliser requirements and there was no move to make the country self-reliant in this sector.

He said the fact that the government had to give free food grains to 81 crore persons was evidence that the number of poor has increased in the country.

“Had the prime minister kept his promise of providing two crore jobs every year, this would not have happened,” Javed said.

Prataprao Jadhav of the Eknath Shinde faction of Shiv Sena lauded the prime minister over the building of infrastructure such as roads and highways across the country.

BJP member Saumitra Khan credited the prime minister and the finance minister for steering the country at a time when the world economy was facing headwinds.

Akali Dal member Harsimrat Kaur Badal slammed the Punjab government for issuing advertisements by spending ”hundreds of crore of rupees” in newspapers in as far as Tamil Nadu seeking suggestions for the state budget.

Badal demanded that the government levy GST on government advertisements to increase its revenue.

Congress member Thomas Chazhikadan voiced concerns of the rubber growers and demanded that the government fix a minimum support price of Rs 250 per kg for rubber.

Independent member Navneet Rana demanded that the government allocate funds for the renovation of the British-era railway stations in her constituency of Amravati.

Raising the issue of education of minorities, Samajwadi Party member S T Hasan said the government should restart the scholarships it has done away with like the Maulana Azad National Fellowship (MANF).

”Clouds of war” are hovering and it is not known when a third World War breaks out, Hasan said and asserted that only the country which has foreign reserves will survive.

”That can come only through exports, therefore, I urge that maximum facilities should be given to exporters,” he said.

All India United Democratic Front (AIUDF) chief Badruddin Ajmal demanded that the issue of flood and irrigation be solved in Assam and called for enhancing the budget for minorities to provide education to them.

BJD MP Bhartruhari Mahtab hailed the Centre for providing foodgrains to 80 crore people every month during the Covid pandemic and continuing with it, saying the government performed its ‘kartavya (duty).

”At the same time just providing foodgrains to people became a success because state governments also ensured that it reaches the people….Earlier, there was a lot of bungling (in such schemes) under the Congress government in Odisha,” he said.

Chief Minister Naveen Patnaik showed what is ”dharma” and ”niti” and it was manifested that when ”both wheels (Centre and state governments)” work together, people benefit, Mahtab said.

Another ”China stream” of the virus has broken out, it will spread, and the government should be prepared for it, he said.

In this article:Economic indicators, Industrial output, Mahua Moitra, Who is Pappu