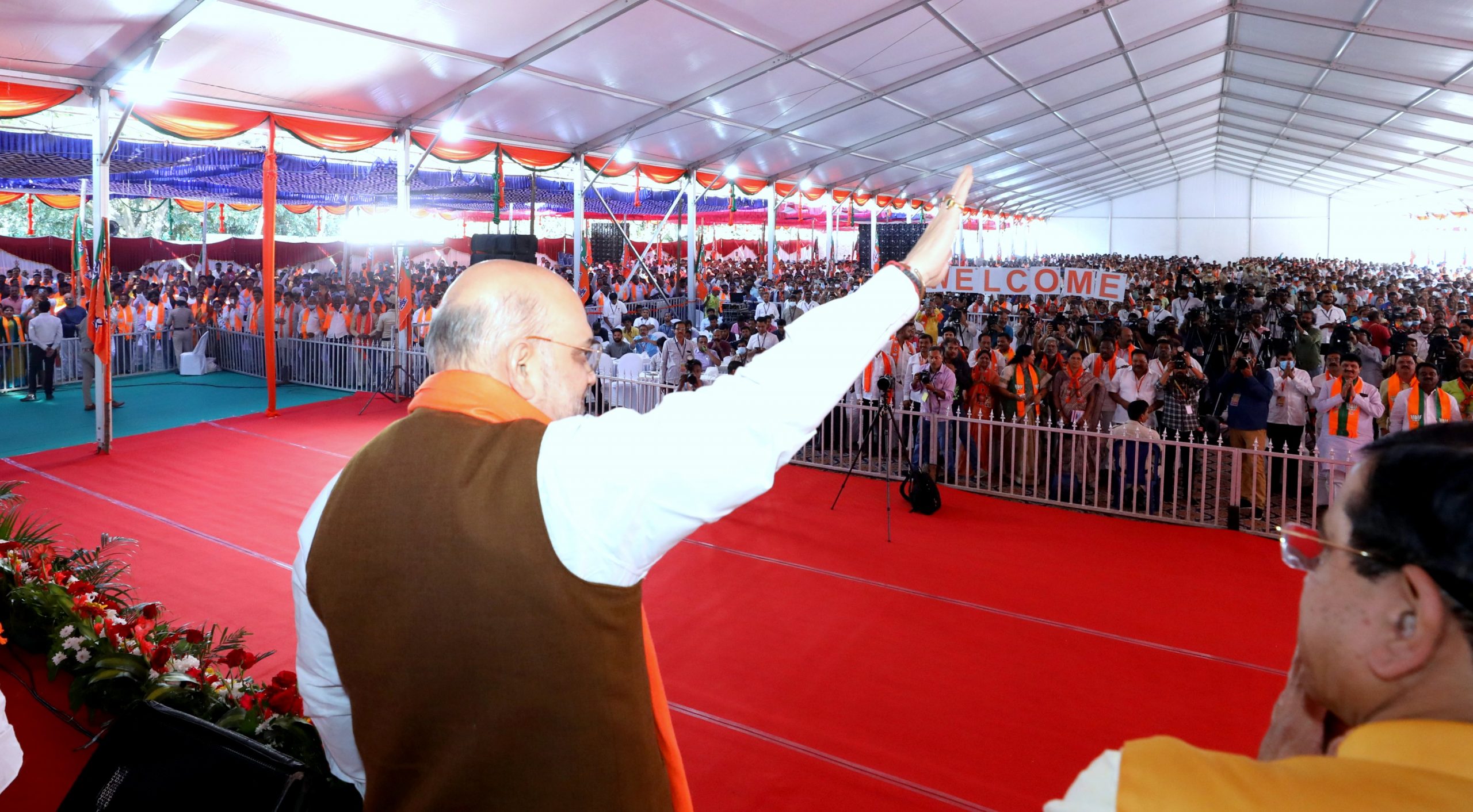 BENGALURU: Urging party workers to ensure that BJP forms a government with two-thirds majority in Karnataka, Union Home Minister Amit Shah on Saturday asserted that the party will go alone in the 2023 assembly polls, and said it will be a direct contest as voting for JD(S) is like casting the ballot for Congress.

He also urged people to decide whether they are standing with a party of patriots, referring to the BJP, or with ”tukde tukde gang” under the leadership of Congress.

Accusing the JD(S) of spreading rumours claiming that BJP will tie up with them, while addressing party workers here, he said: ”I have come to tell the workers and the people of Karnataka that we will not go with any party. We will fight alone and form the government on our own.” ”There are clearly two sides. On one side, there is an organisation of patriots in the form of BJP and on the other side, tukde-tukde gang have come together under the leadership of the Congress. It is for the people of Karnataka to decide now whether they are with the patriots or those who support people who want to divide this country,” he added.

Shah was speaking at the BJP’s booth presidents and booth-level agents convention at the Palace Ground here.

Highlighting BJP’s win in Goa, Uttar Pradesh, Uttarakhand, Manipur, and a tremendous victory in Gujarat, Shah told party workers assembled from across Karnataka: ”If you want to form a government, don’t form an incomplete one, form a government with a full two-thirds majority.” ”I have seen the mood of the people of Karnataka. People are ready (to support us), we need to go to them,” he added.

Further calling Congress and JD(S) two sides of the same coin he said, ”On voting for Congress, Kumaraswamy (JDS leader) will sit on the lap of Congress. Give an opportunity for BJP to form a government with full majority, we will give a patriot government by ending corruption, parivaarvad (dynasty politis) and jaativad in five years.” Noting that in the 2018 assembly polls, people of Karnataka made BJP the single largest party, but there was a slight shortage of numbers, Shah said, as it always happens Congress and JD(S) which fought each other during election, ”sat on each other’s lap to keep BJP away from power.” He was referring to the 2018 assembly election throwing up a hung verdict following which, Congress and JD(S) that had fought each other during the elections, joined hands to form a coalition government to keep BJP out of power.

Calling Karnataka the ”gateway” for BJP to the south of India, the former BJP president, expressed happiness about the response during his visit to Mandya, in the ‘Old Mysuru’ region of the state, where the party is considered to be weak.

He told party workers to concentrate on their booths like Arjuna in the epic Mahabharata could see only the bird’s eye while aiming his bow during an archery session. ”You strengthen your booth and Modiji will strengthen the country.” For Congress, power is an instrument for corruption, while BJP sees it as an instrument to serve the poor, the Union Minister said, while making an appeal to workers to take the work, programmes of the Central and state governments, with a message of clean administration to the people.

Listing pro-people and pro-poor programmes of the BJP government, he said, ”Deve Gowda, Siddaramaiah, Congress President speak about the poor. You have been Prime Minister, Chief Minister and Congress ruled for four generations. Come with your account, our Yuva Morcha workers will give you an account on the streets of Bengaluru.” Shah further said, on one side, there is Modi and BJP who banned the Popular Front of India (PFI) and on the other side there is Congress’ Siddaramaiah and H D Kumaraswamy of JD(S) who withdrew cases against 1,700 PFI cadres.

”People of Karnataka will have to decide about the state’s security and save our youth,” he said.

PM Modi and BJP are redeveloping Kashi, Kedarnath, Badrinath along with Ram Mandir in Ayodhya, while there are people who have made a hero out of Tipu Sultan, he further said, adding that ”people of Karnataka will have to decide between them.” Shah also blamed Congress for keeping Article 370 with respect to Jammu and Kashmir for 70 years, and said, ”on August 5, 2019 by abrogating Article 370, Modi has put an end to terrorism.” ”When I took the Bill on abrogation (of Article 370) to Parliament, the Congress, JD(S), Communists, Samata, Mamata (TMC), SP, BSP, objected to it saying that a river of blood would flow in Kashmir. Today, I will tell them no one had the courage to even throw a stone, this is Narendra Modi’s government.” ”Can D K Shivakumar, Siddaramaiah and Kumaraswamy and their parties fight against terrorism and safeguard this country? Can they protect Karnataka from PFI? No, they can’t. They fear vote bank, but BJP believes in protecting the country,” he added.