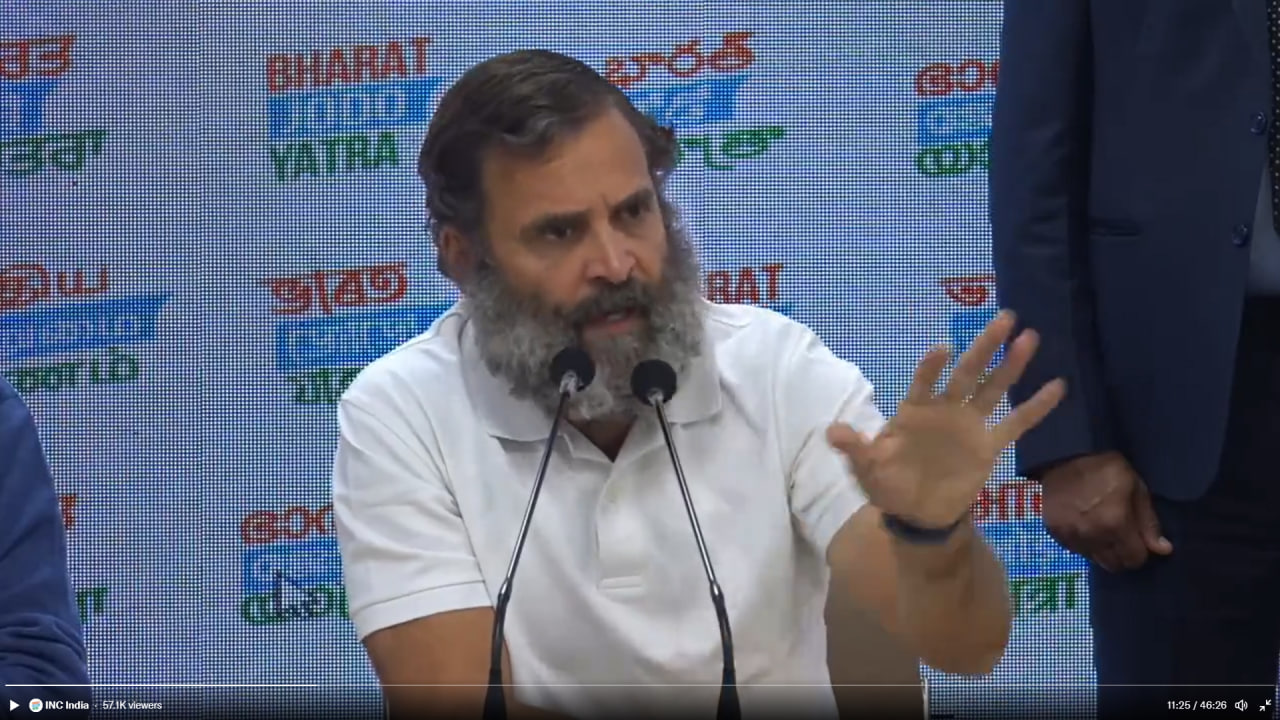 NEW DELHI: Former Congress chief Rahul Gandhi on Saturday said there is a ”massive undercurrent” in the country against the BJP and if the opposition stands effectively against it with an alternative vision, it will be very difficult for the saffron party to win the 2024 Lok Sabha polls.

Addressing a press conference at the AICC headquarters here, Gandhi said the opposition has to present a national ideology before people, which regional outfits do not have and only the Congress has. He also said there is a need for the opposition parties to have ”mutual respect” for each other.

Gandhi noted that the Bharat Jodo Yatra is a framework and a way of thinking of the Congress on bringing people together.

This was Gandhi’s ninth press conference ever since he started the foot march on September 7.

The Congress leader also spoke about a clear foreign policy, unlike a ”confused” policy pursued by the BJP-led government, and greater economic equality.

Gandhi alleged that China and Pakistan have come together and it is a dangerous development because the government ”mishandled” the foreign policy. He called upon the government to admit its mistakes, take corrective measures and tell the country what happened at the border with China, adding that the opposition will extend its full support to it.

The Congress leader said he considers the RSS-BJP as his ”guru” as they constantly show him the path that should not be taken. ”The more they attack us, the more it gives us the opportunity to improve ourselves,” he said.

Gandhi claimed that all the opposition parties are with the Bharat Jodo Yatra but in today’s atmosphere, they have political and other compulsions that are keeping them away from joining it. He, however, said the doors of the yatra are open to anyone who wants a united India, free from violence and hatred.

”I think if the opposition stands effectively with a vision, what I am hearing and seeing from the ground, it will be very difficult for the BJP to win. But the opposition has to coordinate properly and it has to go to the people of India with an alternative vision. There is a huge undercurrent against the BJP, a massive undercurrent,” he said.

Gandhi asserted that this is no longer a tactical fight, where one party joins hands with another and defeats the Bharatiya Janata Party (BJP).

”This is so as the entire institutional framework of the country is in the hands of one ideology and it dominates the country’s political space completely. To defeat them now, there is a need for an alternative ideology,” he said.

Noting that he respects the other opposition parties and their leaders, Gandhi said if one looks at the Samajwadi Party (SP), it does not have a national ideology.

”They do have a positioning in Uttar Pradesh…. But they do not have a national ideology. The SP’s idea will not work in Kerala, Karnataka or Bihar. So there is a need for a central ideological framework, which only the Congress can provide and that is our role.

”But our role is also to make the opposition people feel comfortable and that they are respected,” he said, adding that there should be mutual respect for each other.

”The idea of Bharat Jodo is a framework. It is a way of working, a way of thinking. Of course, I am not the Congress president and a lot of work in that direction will probably be done by the Congress president. But it is about bringing people together and making them feel comfortable,” Gandhi said on opposition unity.

Spelling out his vision for the country, he said India should emerge as a ”production nation”, instead of a ”rent-seeking” nation. It should have an education policy that allows children to give wings to their imagination and look beyond careers in medicine, engineering, civil services and law, the Congress leader added.

”My focus is on the idea that India should be united and that we fight hatred and anger with love, affection and harmony. We are providing an alternative vision for the country and that is what I have to focus on,” he said.

Gandhi said he is in favour of large businesses as they play a central role in the economy, but the same should not be controlled by ”two-three people”.

”I absolutely agree that there is a place for large businesses and they have a central role to play in India’s future. But it cannot be that two or three business people run this country. It cannot be,” he stressed.

The Congress MP said there are talks of another East-West Yatra, but the Bharat Jodo Yatra is trying to say something and if that message is ignored, ”then in a way, it will be an insult to the voice of India”.

Gandhi accused the Centre of using different security protocols for BJP leaders and for him, noting that the current regime wants him to undertake the ”Bharat Jodo Yatra” in a bulletproof vehicle, which is not acceptable to him. He alleged that the government is trying to make a case against him that he does not follow security protocols.