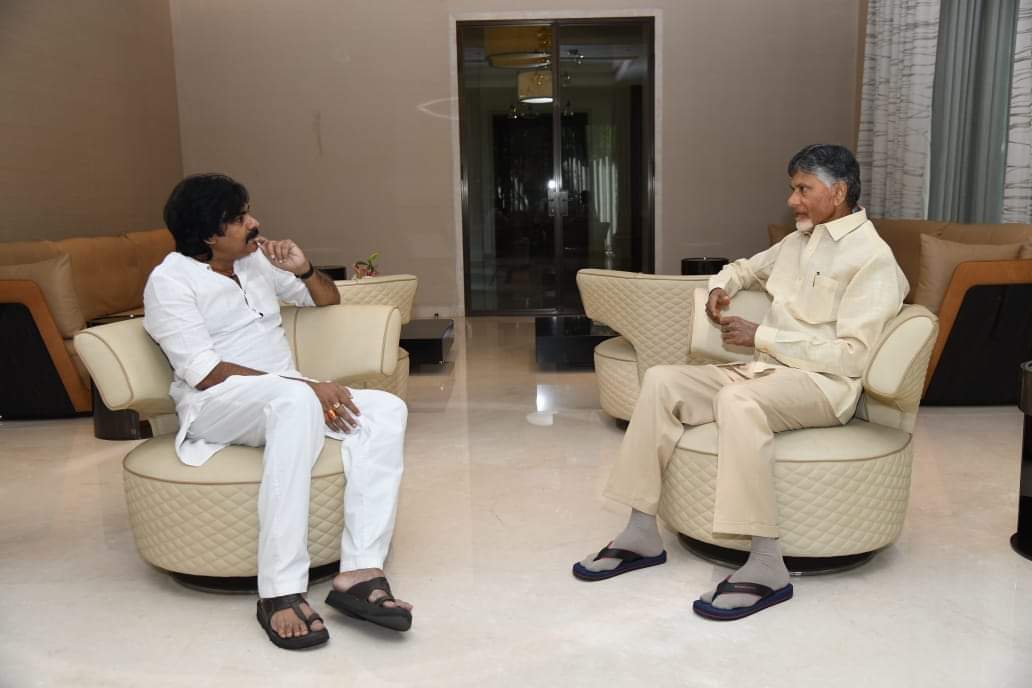 Kalyan vowed to ensure the opposition vote in AP does not get split in the 2024 elections, implying a political realignment, to defeat Y S Jagan Mohan Reddy.

With both camping in Hyderabad for the weekend, Kalyan drove to Naidu’s Jubilee Hills residence for the meeting, the first formal interaction between the two after several years.

The Jana Sena is currently in alliance with the BJP in the state while the TDP was once the lead partner of the tripartite combination.

Since 2018, the TDP has been sailing alone, having snapped ties with the other two.

The BJP is apparently disinclined to realign with the TDP even as the Jana Sena is moving closer to the former ruling party.

In this backdrop, the meeting between Naidu and Kalyan assumes significance.

In October last year, the TDP president met Kalyan in Vijayawada to extend solidarity after the state government blocked the latter’s programmes in Visakhapatnam.

The Jagan Mohan Reddy regime brought out a new Government Order (GO) on January 2 prohibiting rallies and meetings on roads across the state, ostensibly targeting the opposition parties and Naidu himself became the first target of the restrictions during his visit to Kuppam from January 4-6.

The two leaders were said to have discussed the fallout of the GO, particularly at a time when actor-cum-politician Kalyan was planning to undertake a statewide tour in a custom-designed campaign vehicle ‘Vaarahi’ and Naidu’s son Nara Lokesh scheduled a 400-day foot march from January 27.

The Jana Sena has already announced that it would challenge the controversial GO in High Court while the TDP is also expected to follow suit.