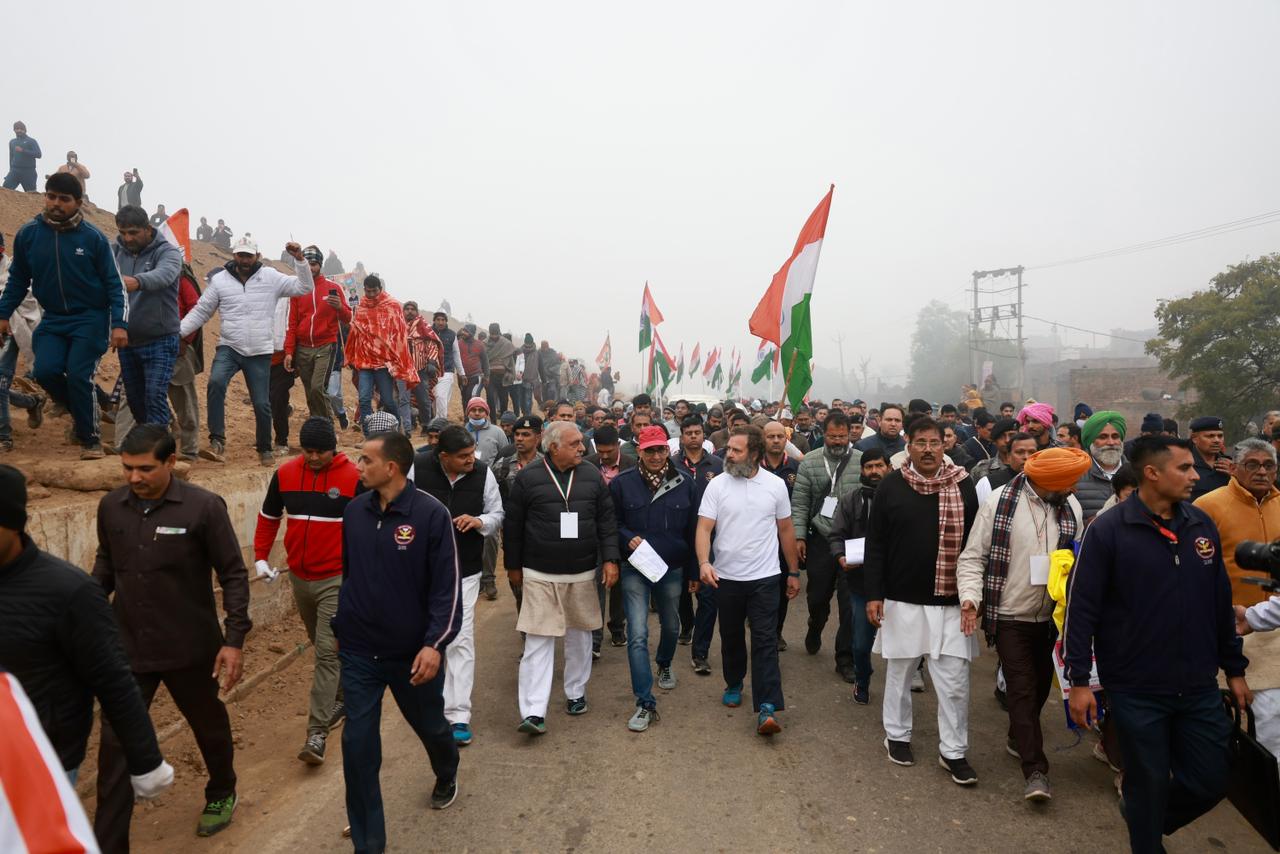 KURUKSHETRA: Congress leader Rahul Gandhi on Sunday said the Bharat Jodo Yatra was against hatred and fear being spread in society as well as unemployment and inflation.

On the Yatra, Gandhi said, “We are seeing it as ”tapasya”, suggesting the foot march was about austerity and self-meditation.

The Congress believes in ‘tapasya’ while the BJP is an organisation of “pooja”.

The BJP and the RSS do not respect ‘tapasya’ but want that people who do their ‘pooja’ (worship) be respected only, he added.

Gandhi said the Yatra’s purpose is also to let people hear the true voice of the country.

Replying to a question, Gandhi said, “One thing which I have understood is that this fight is actually not political, superficially it is political fight. When we fight BSP or TRS, then it is a political contest. But there has been change in the country.

“The day when the RSS controlled the institutions of this country, the fight did not remain political. Now, this has become a different fight. You may call it a fight of ideology, dharam ki fight, or you can give it any framework, but this is not a political fight.” “If you look at Congress party’s history, what you (reporter) said there is an energy in workers. It is an organisation of ‘tapasya’…” he said he addressing the media here.

“BJP is a ‘sangthan of pooja’, ” he claimed, adding both the BJP and the RSS want people to “worship” them.

“RSS wants they be forcibly worshipped. (PM Narendra) Modi ji wants this, that is why he does not meet you (media), that he be worshipped forcibly and all people in the country should worship him,” Gandhi alleged.

He said the Congress’ response is only one and it is ‘tapasya’ and nothing else.

He said there should be respect of ‘tapasya’, of skill and work.

He further said, “The BJP and the RSS say there should not be respect of ‘tapasya’ and those who do their ‘pooja’ (worship), only they should be respected. Did demonetisation respect the ‘tapasya’ of the poor? Certainly not. It was an attack on ‘tapasya.” “The BJP and the RSS are taking the country towards ‘forced pooja’ using of wealth, capturing institutions and making people fear,” Gandhi alleged.

The former Congress president also took on the BJP-led Centre on the issue of “plight” of the farmers.

“A farmer is being cornered from every side,” he said and pointed out that the farmers were hit by fuel and urea prices.

The backbone of the country, which is feeding us, is being attacked, he charged.

Talking about the Kanyakumari to Kashmir foot march, which is currently passing through Haryana, Gandhi said it has received an overwhelming response and he got to learn many things during the course of the journey so far.

“What is in the country’s heart got to hear that directly (interacting with people). The Yatra has received good response in Haryana — it is energetic, enthusiastic response,” he said.

In an attack on the critics of the Yatra, Gandhi said when it was started, ”people said the response which we got in Kerala, we won’t get that in Karnataka, which is a BJP-ruled state. But we got even better response there. Then they said the Yatra got response in south India, but when it reaches Maharashtra, it won’t get that response. When we reached Maharashtra, we got even better response than the south”.

“Then it was said we will not get good response when the Yatra passes through the Hindi belt, but in Madhya Pradesh there was even more improvement to the response. When we reached Haryana, it was said it is a BJP-ruled state, but here too the response was overwhelming. As we are moving forward, the response is improving,” he said.

”We love our country, we love our people, farmers, poor and we want to walk with them. So, Yatra’s purpose is also that people of this country get to hear true voice of the country,” the Congress leader said.

He said there is economic inequality in the country and wealth, media and other institutions are being controlled by a few people.

This Yatra is against unemployment, inflation, he added.

On farmers’ issues, Gandhi said, “Farmers are being cornered from all sides. They are directly hit by fuel prices and urea prices and not getting insurance claims.” The three farm laws (now repealed) were not the farm laws. They were weapons to hit them (farmers), like demonetisation and wrong GST were weapons to hit small traders, he further said.

The Yatra, which started from Kanyakumari in Tamil Nadu on September 7, will end with Gandhi hoisting the national flag in Srinagar on January 30. The march has so far covered Tamil Nadu, Kerala, Karnataka, Andhra Pradesh, Telangana, Maharashtra, Madhya Pradesh, Rajasthan, Delhi and Uttar Pradesh.